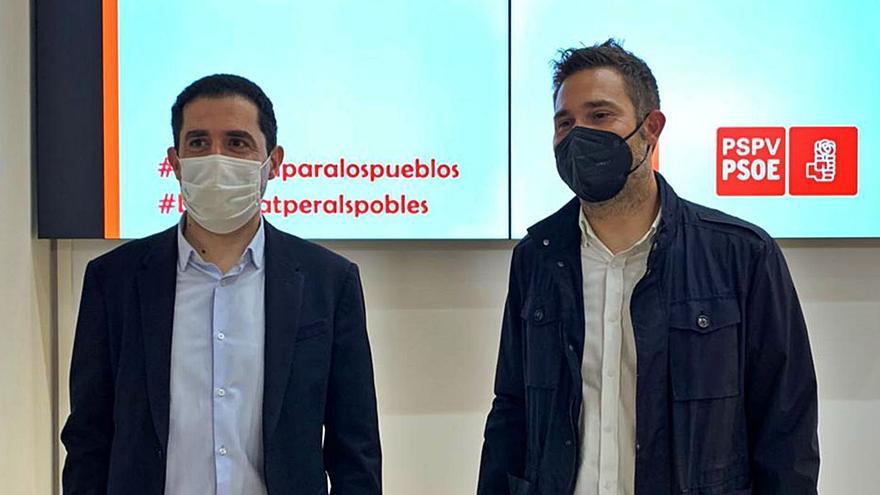 The growing climate of confrontation of Carlos Mazón against the Botànic and the support he is receiving from Genoa to become the new president of the regional PP have led the left to give a coup to expose the harshness of the situation that the municipalities are experiencing Alicante. PSPV and Compromís have decided to direct their criticism towards what their adversary is turning into their loudspeaker: the Diputación de Alicante. That is where they are going to attack to show their weaknesses. The spokesmen in the PSPV and Compromís Provincial Council, Toni Francés and Gerard Fullana, have made a common front to transfer the complaints of the mayors about the decision of the PP not to join the Cooperation Fund for five years and leave the province with 70 million less than what they would have received through this plan promoted by the Consell. But they don’t just stay on this matter. Political leaders will gather to denounce the delay in the distribution of grants from Plan Resistir, the DANA aid that 18 months after the storm remains unpaid, or the collapse of the works plans.

A large part of the complaints are focused on the Plan + Cerca, which is managed by Ciudadanos, and which remains unresolved despite the fact that the municipalities have until the beginning of November to be able to carry out the works. Regarding this investment program, PSPV and Compromís recalled yesterday that the Provincial Council has made a regulation that demands that the people finish the works in seven months despite the fact that, as of today, they still do not have the information. This was one of the main complaints of the opposition, which also denounced that there are about 1,000 works parked in the second row. This newspaper collected the opinions of different socialist mayors, who claimed to feel “desperate” to see how the projects do not advance. «The case of Plan + Cerca is serious because last year’s work plan has been accumulated, still not executed. We are the only Provincial Council that has not executed its works plan. With the same resources we are paying for the incompetence of a president who was unable last year to approve any aid for the municipalities, “said Fullana. Furthermore, the left criticized the Planifica plan for not having approved a single bidding process. According to his calculations, the first work will begin in March 2022 and less than 20% of the works will be started by the end of the term.

The spokespersons expressed their concern about the aspirations of the president of the Diputación before what they consider “an abandonment” of the management. “He is more concerned with posturing than with being useful to this province. He is a president who, looking at Valencia, turns his back on the Alicante province, who is only concerned about his personal projection, his immediate future and whether he is going to preside over the Popular Party in the Valencian Community or not, “said Toni Francés. In this sense, Fullana regretted that “the government of the Diputación has gone bankrupt because it needed a lot of propaganda for Mr. Mazón and the Zaplanistas to win back the Popular Party.” The Valencianist added that they are calling for this mobilization because of “a replica of the Zaplanista earthquake” because “the management of Mazón is a replica of that political disaster that destroyed the ethics and infrastructure of this Community.” In turn, the socialist and Compromís groups accused the government team of “snatching” freedom from the town councils of the province by refusing for the fifth consecutive year to join the Municipal Cooperation Fund.

PP and Cs estimate investments in towns at 328 million

The government team of the Diputación, made up of PP and Citizens, met the opposition’s criticism and assured that it has reinforced support and assistance to the municipalities of the province with about 328 million, “the highest figure in the history of the provincial institution ”, they said.

The government team led by Carlos Mazón has increased transfers to local entities in the years marked by the pandemic. This was stated yesterday by the spokesman for the government team, Adrián Ballester, who stressed that “never in the history of the Alicante Provincial Council has so much money been made available to our municipalities through transfers that directly result in the well-being of citizens of the province and that they reach all the towns ». As specified, to the ordinary budgets promoted by the institution in 2020 and 2021, which collect 90 and 102 million euros, respectively, in direct injections to municipalities, is added the investment that, in an extraordinary way, has activated the Alicante Corporation for support municipalities in matters such as water, infrastructure, environment, sport or social welfare, and meet the social and economic needs of the covid

In this sense, Adrián Ballester added that, through the town councils, the Alicante Provincial Council has mobilized more than 50 million euros in direct aid against the covid in the last 12 months.