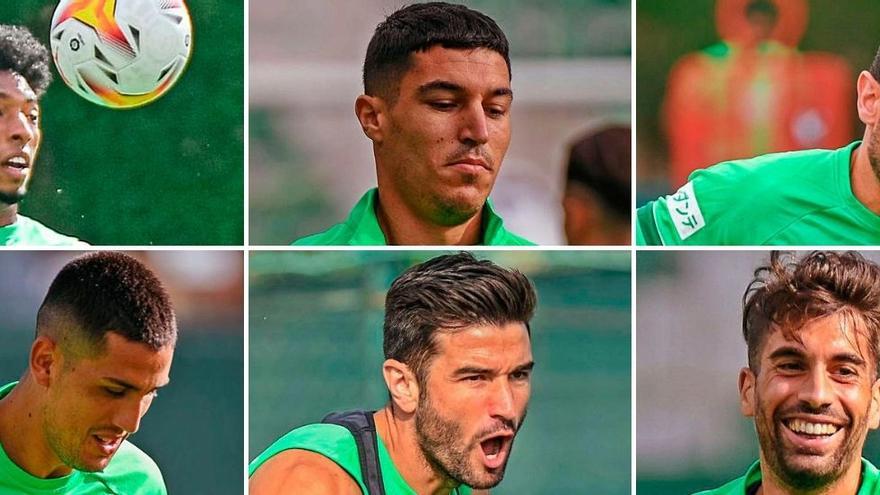 With less than four days until the match, the franjiverde coach does not know how many players they can count on and in what conditions they are to put together the rear, especially for the central axis.

Diego González and Pedro Bigas are practically ruled out. The man from Cádiz continues to exercise outside the group, due to his problems that he has been dragging in the adductor, and he will not force himself to be in Vallecas. While in the case of the Mallorcan, despite the fact that he has already begun to do part of the work with the group, it is too premature that he can return after only a month of rehabilitation after his partial tear of the external lateral ligament of his right knee.

These two must be joined by Enzo Roco, who until late Friday afternoon does not plan to return to Elche and will do so with the fatigue typical of a long trip and three games with the Chilean national team.

At the moment, the only two specific center-backs from the squad who have been training with the group throughout this week are Gonzalo Verdú, who has already recovered from his discomfort in the calf of his left leg; and Josema Sánchez.

In principle, if Roco returns too fatigued, the Cartagena and Murcia could form the center of the defense. But in the same situation as the Chilean, Mojica could be found, who, in addition, has played the two complete games with Colombia and still has the one of tomorrow night Thursday against Venezuela. The only replacement for the Colombian on the left side is Josema.

Depending on the pieces available, Escribá could also choose to play with a line of four in defense, as he has done in the last two games against Real Sociedad and Celta; or return to the system of three centrals and two lanes, which was the tactical scheme that he used during the first seven days of the League.

In that case, the Valencian coach always has the wild card of Antonio Barragán, who can play as a right-back, lane or right-handed central, as he already did in Villarreal.

In the worst case, that neither Diego González, nor Pedro Bigas, nor Enzo Roco were in full condition to play; Barragán, Gonzalo Verdú and Josema could perfectly form a line of three centrals. Helibeltón Palacios or Josan, who still has not overcome his ankle discomfort one hundred percent, could be the right wing; While in the zurzo lane, if Mojica arrives very tired, when playing with a defense of three, Fidel could also enter, who last season already played that role on numerous occasions.

If, on the contrary, both Roco and Mojica return in good condition, the possibilities would open because the Chilean could form the pair of centrals with Gonzalo Verdú, the Colombian would occupy his natural position of left back and Barragán the right. In that case it would be the same defense that initially came out in the last match against Celta de Vigo.

There are alternatives in the template, but until Escribá is clear about the pieces of the puzzle, he cannot form the puzzle and this prevents him from preparing the game, as would be desirable, throughout the week.

Gym and back to Díez Iborra

The Elche squad had a different work session yesterday. Having rested last Saturday and Sunday and having up to six training sessions this week, the coaching staff opted to vary the routine and the players exercised in the Martínez Valero stadium gym.

It will be from today Wednesday when the Elche team begins to prepare in a more concrete way the match against Rayo Vallecano.

And he will do so with the return to the Díez Iborra field of the Ciudad Deportiva Juan Ángel Romero, who has not stepped on for about a month, due to the replanting of the grass and who has forced him to make a pilgrimage to train in Algorfa.

The four remaining training sessions before Sunday’s game are scheduled at Díez Iborra, at 10:30 in the morning. After the last of Saturday, the franjiverde expedition will travel in the afternoon by AVE to Madrid.

In today’s session, which will be more demanding, it will be possible to see the evolution of the footballers who have problems. Gonzalo Verdú and Josan are the ones who are practically recovered. While Diego González and Pedro Bigas will progressively increase the workload. In principle, neither of these last two is available, but everything will depend on the sensations they have over the next few days.

In any case, the decisions will not be made. You will write until the same Saturday before you travel. For that day it is expected that both Mojica and Roco will join the training sessions, and depending on how they return, the Elche coach will make the decisions and form the list of 23 players who will travel to the capital of Spain to play the match against to Rayo Vallecano.

Also Read  Secrets and tips for preserving and consuming ginger