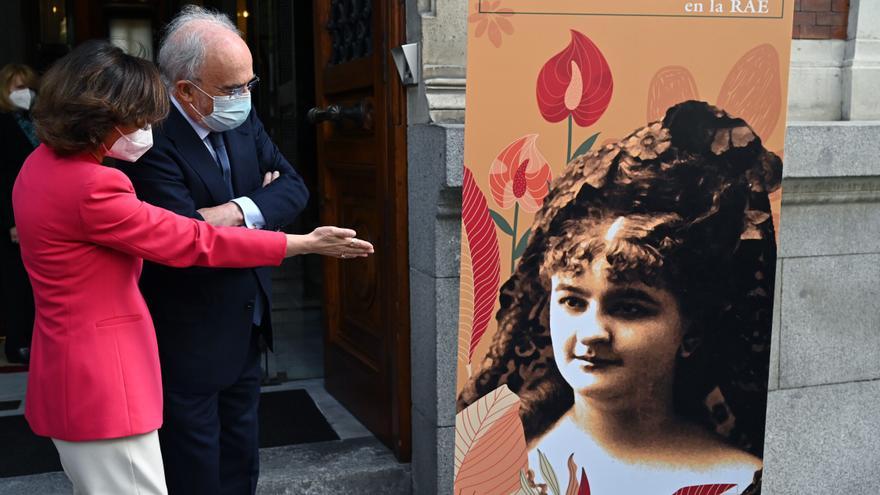 The Royal Spanish Academy (RAE) he regretted this Thursday the “damage” he did to the writer, journalist and feminist Emilia Pardo Bazán by not allowing her to be an academic just because she is a woman, in a tribute act held in this institution where she has been “seated” in her nonexistent chair 47.

One day after the centenary of his death, the director of the RAE, Santiago Muñoz Machado, has recognized that Pardo Bazán (La Coruña, 1851- Madrid, 1921) “suffered a lot” by the rejection of the Royal Academy and has indicated that, although you cannot “amend history”, the writer should sit in her symbolic 47 chair (there are only 46 academics in number).

Muñoz Machado has immediately read a letter that Pardo Bazán addressed to the RAE in March 1914, written in his own handwriting, requesting his admission to it, a letter in which he explained his literary and institutional merits, the books he had published and the positions he had held.

An “unusual” way, since the statutes require that three academics in number sign the admission proposal, although it was not an “extravagance” because in the 19th century individual petitions were also allowed, the director of the RAE recalled.

In response to the letter, there is a document that is not signed, Muñoz-Machado has said, in which it was stated that the petition was not going to be processed because it did not meet the objective conditions, that is, that it was not a man.

After the death of Pardo Bazán, the Marchioness of San Luis asked the RAE in 1921 to appoint her an honorary academic to repair the damage that was done to her, but the Language Academy did not accept the request, although its then president, Antonio Maura explained that she had not been admitted for processing for reasons of an objective nature.

“Emilia Pardo Bazán suffered a lot with the RAE”, said the director, who recalled that he was one of the most relevant and worthy figures to be in the symbolic chair 47.

“We look with sorrow, but we cannot amend the story,” although “we regret that a situation like that of Doña Emilia occurred,” he added.

Before Pardo Bazán, in the 19th century the Spanish-Cuban writer Gertrudis Gómez de Avellaneda was also rejected from entering the RAE because she was a woman. And we had to wait until 1977 for Carmen Conde to enter as the first academic.

The First Vice President of the Government and Minister of the Presidency, Relations with the Courts and Democratic Memory, Carmen Calvo, thanked the Royal Academy for the act of tribute and its director for his “sincere and courageous words” recognizing the damage that the institution did to Pardo Bazán.

“How interesting it would be to hear Pardo Bazán’s comments about this act, they would not have any waste! “, Said the vice president, who has indicated that, although history cannot be rectified, he trusts that “the symbolic chair 47 is a formula for recognizing the literary value of Emilia Pardo Bazán and the injustices that women know so much about”.

Calvo has highlighted the importance for Spanish letters of the validity of the work of Pardo Bazán and also for women: “One of the few women in history who wear the doña”, which shows the security and capacity she had in adverse circumstances to be herself and her “immensity”.

“He knew how to see in advance what the evolution of women was going to be; could be a feminist being a conservative “, has stressed the vice president, who recalled that the writer gave “an extraordinary push” to freedoms, to hers, to that of women and, therefore, to that of the country as a whole.

The former director of the RAE and expert on the figure of Pardo Bazán Darío Villanueva has considered that “the biggest mistake that the RAE has made in its 300 long years” was in 1853 responding to Gertrudis Gómez de Avellaneda that she could not enter the academy because the statutes did not allow it and to repeat it in 1914 with the Galician writer.

It was an “interested error”, in the opinion of Darío Villanueva, to close the door, although he recalled that not all academics thought the same and eight voted in favor of it: “If it had entered the RAE, the Academy would have been different from what it was,” he said.

The literary day held was coordinated by Carme Riera and eight academics (Soledad Puértolas, Miguel Sáenz, Luis Mateo Díez, Manuel Gutiérrez Aragón, Juan Mayorga, José María Merino, Darío Villanueva and Riera herself) spoke about the feminist cosmopolitanism of the writer, her relationship with Madrid and Catalonia, her narrative (from the beginning and on specific passages), her theatrical side and the cinematographic universe she has inspired.