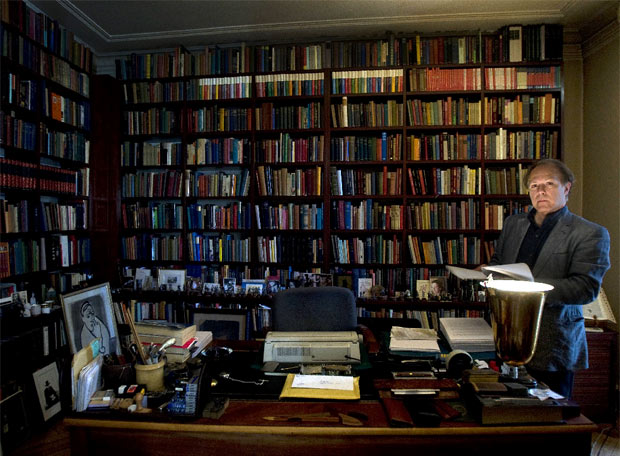 Javier Marias returns to the novel with ‘Tomás Nevinson’. And he does it with a story about the limits of good and evil that comes from his previous novel, Berta Isla. The new work of the Madrid writer sees the light, by the hand of Alfaguara, on March 11, simultaneously in Spain, Latin America and the United States. Here we publish the first pages of the book.

I was educated in the old-fashioned way, and I never believed that I would one day be ordered to kill a woman. Women are not touched, they are not beaten, they are not physically hurt and verbally they are avoided to the maximum, to the latter they do not correspond. What is more, they are protected and respected and given the way, they are protected and helped if they carry a child in their womb or in their arms or in a stroller, one offers them their seat on the bus and in the subway, even protects them when walking down the street away from traffic or from what was thrown from balconies in other times, and if a ship capsizes and threatens to sink, the boats are for them and their small offspring (which belong to them more than men), at least the first places. When they are going to be shot en masse, their lives are sometimes spared and put aside; They are left without husbands, without parents, without siblings and even without adolescent children or of course adults, but they are allowed to continue living maddened with pain like suffering specters, who nevertheless turn years and grow old, chained to the memory of the loss of his world. They become repositories of memory by force, they are the only ones who remain when it seems that no one remains, and the only ones who tell what has happened.

Well, they taught me all this as a child and all this was before, and not always to the letter. It was before and in theory, not in practice. After all, in 1793 a Queen of France was guillotined, and previously countless women accused of witchcraft and the soldier Joan of Arc were burned, just to name a couple of examples that everyone knows.

Yes, of course, women have always been killed, but it was something against the current and that on many occasions gave rise to objection, it is not certain if Ana Bolena was granted the privilege of succumbing to a sword and not to a crude and clumsy ax, nor at the stake, because she is a woman or because she is Queen, because she is young or because she is beautiful, beautiful for the time and according to the stories, and the stories are never reliable, not even those of direct witnesses, who see or hear dimly and they are wrong or lie. In the engravings of his execution, he appears on his knees as if he were praying, with his trunk upright and his head held high; had the ax been applied to him, he would have had to rest his chin or cheek on the cut and have adopted a more humiliating and more uncomfortable posture, have thrown himself on the ground, as they say, and have offered a more prominent view of his buttocks to those who from your angle you will find them head-on. Curious that the comfort or composure of his last moment in the world was taken into account, and even the panache and decorum, what else would all that give to someone who was already imminent corpse and was about to disappear from the earth under the earth, in two pieces. It is also seen, in these representations, the ‘sword’ of Calais, so called in the texts to differentiate it from a vulgar executioner – brought ex profeso due to his great skill and perhaps at the request of the Queen herself – always behind her and hidden from her sight, never in front, as if it had been remembered or decided that the woman would be spared seeing the blow coming, the trajectory of the heavy weapon that however, it moves fast and unstoppable, like a whistle once it is emitted or like a strong gust of wind (in a couple of images she is blindfolded, but not in most of them); that she ignored the precise moment when her head would be cut off with a single clean blow, and fell on the platform face up or face down or side, standing or crown, who knew, of course she would never know; that the movement should catch her by surprise, if there can be a surprise when one knows what she has come for and why she is on her knees and without a cloak at eight in the morning on an English day in still cold May. He is on his knees, precisely, to make it easier for the executioner and not to jeopardize his ability: he had done the favor of crossing the Channel and lending himself, and perhaps he was not very tall. Apparently, Anne Boleyn had insisted that a sword was enough, since her neck was thin. She must have put her hands around it more than once, as a test.

In any case, she was looked at more closely than Marie Antoinette two and a half centuries later, who was told that she was treated worse in her October than her husband Louis XVI in his January, he had preceded her in the guillotine about nine months. That she was a woman did not count for the revolutionaries, or perhaps it is that the consideration of sex seemed anti-revolutionary in itself. A lieutenant named De Busne, who showed him some respect during previous custody, was arrested and promptly relieved by another, more surly guard. The King’s hands were tied behind his back only when he reached the foot of the gallows; the journey there he did in a covered, closed car, that of the mayor of Paris I believe; and he was able to choose the priest who assisted him (one who was not sworn, that is, one who had not sworn allegiance to the Constitution and to the new order that changed daily and condemned him). His Austrian widow, on the contrary, had her hands tied before the paseo, which had to be carried out in a wagon, more vulnerable and exposed to the hatred unleashed on their faces and the expletives of the crowd; and they offered only the services of a sworn priest, which she politely declined. The chronicles say that the education that he lacked during his reign was dispensed in the last moments: he climbed the steps with such agility that he tripped and stepped on the executioner’s foot, with whom he immediately apologized as if he had that custom (‘Excusez -moi, Monsieur ‘, he said).

The guillotine has its preambles of obliged disgrace: the condemned not only had their hands tied behind them, but once they were up, their arms were tied around their torso with a tight rope, a premonition of being shrouded; stiff and clumsy, almost immobilized and unable to fend for themselves, two assistants had to lift them up like a bundle (or as was done later with dwarfs who were fired from a cannon in circuses) and slide or push them face down, completely horizontal, lying down, until his neck fit in the assigned hole. In that, Marie Antoinette did match her husband: the two were thus reified at the last moment, handled like bundles or bullets of wool or like torpedoes from an archaic submarine, like bundles whose head poked out before rolling off in an unpredictable way, without direction or meaning until someone grabbed her by the hair, in full view of the crowd. In any case, it happened to none of them what happened to Saint Dionysius, according to a French cardinal who was amazed that, after his martyrdom and beheading during the persecutions of the Emperor Valerian, he had walked with his severed head under his arm from Montmartre to the place of his burial (considerably lightening the work of the porters), where the abbey or church of his name was later erected: a distance of nine kilometers. The portent left the cardinal speechless, he claimed, but in fact it inflamed his verb, so that an ingenious lady who was listening interrupted him, reducing the feat with a single sentence: ‘Ah, sir! -Told him-. In that situation, only the first step costs. ‘

Only the first step costs. Perhaps that could be said of everything, or of most of the efforts and of what is done with displeasure or disgust or reservations, very little is undertaken without any reservation, there is almost always something that induces us not to act anymore. not taking that step, not leaving home and not moving, not addressing anyone and preventing others from talking to us, looking at us, telling us. Sometimes I think that our entire lives – even those of ambitious and restless souls and the impatient and voracious, eager to intervene in the world and even to rule it – are nothing more than the long and postponed yearning to be undetectable again as when we had never been before. born, invisible, without giving off heat, inaudible; to be silent and be still, to retrace the journey and undo what has already been done that can never be undone, at the most forget it if there is luck and if no one tells about it; to erase all the traces that testify to our past existence and unfortunately still present and future for a time. And yet we are not capable of trying to fulfill that longing that we do not even recognize ourselves, or only very brave and strong, almost inhuman spirits are: those who commit suicide, those who withdraw and wait, those who disappear without say goodbye, those who really hide, that is, those who really try to never be found; the anchorites and remote hermits, the impersonators who shake off their identity (‘I’m no longer my old self’) and acquire another to which they unhesitatingly abide (‘Idiot, don’t think you know me’). The deserters, the exiles, the usurpers and the forgetful, those who do not really remember who they were and are convinced that they were who they were not when they were children or even young, and even less at birth. Those who do not return.