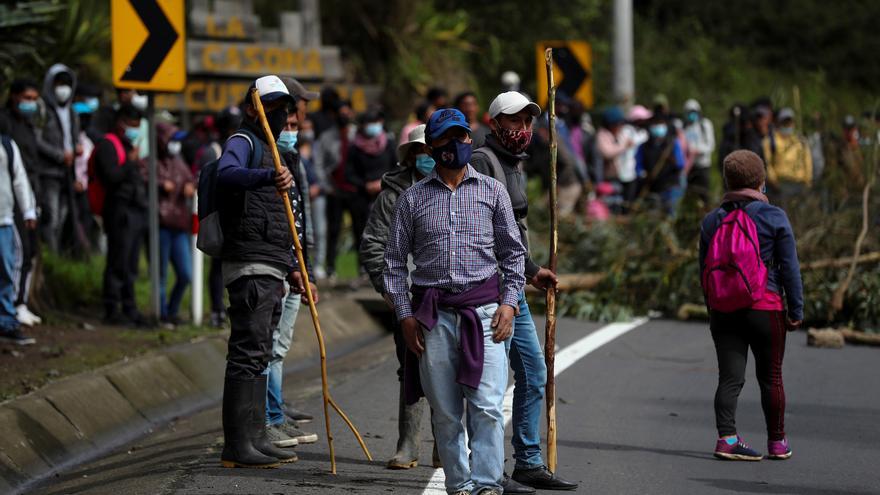 a violent clash between protesters and officers of Police in Quito, in the vicinity of the Presidency, marked the day of social protests in Ecuador, which left about 37 detainees, at least five injured, and had several epicenters but none like the one in the capital. The setting was the historic Plaza de Santo Domingo, the place where the protesters converged after a peaceful march of less than two kilometers that had been summoned by unions, unions and social groups. “In all parts of Ecuador the demonstrations have been peaceful. This is the only outbreak of violence all day, “said the Minister of Government (Interior), Alexandra Vela, in a press conference in which the Government took stock of the day. He accused the outbreak of” vandalism “to a group that he called a “Guevarista group”, about “50 young people dressed in black with green backpacks” who were going to the end of the march.

Upon entering the square, according to the minister, the group began to provoke the police and throw stones to the agents, while the main union leaders took the floor from the monument in the center of the compound. Despite the large group of riot police stationed on the other side, the protesters managed to tear off the barriers of one of the streets that gives access to the neighboring Plaza Grande, where the Presidency is located. Agents on foot responded with tear gas while other motorized and on horseback drove the protesters away from the historic center, which they achieved in less than an hour. Meanwhile, large cobblestones were stripped from the pavement to be used as throwing weapons against officers, five of whom were injured. In total, Vela said, 37 people have been arrested throughout the day, some at the demonstration and others for cutting and blocking roads in various provinces of the country.

Videos on social networks showed, from the morning, pickets and blockades with branches, stones and fire, as well as less intense clashes, in provinces such as Imbabura, Cotopaxi and Azuay, in the Andean Sierra, and Guayas on the coast. Human rights groups have denounced some cases of alleged excessive use of force by police officers, in one of the cases against a journalist, while a case of sexual abuse of a woman has also been reported.

In another episode, north of Quito, Defense Minister Luis Hernández confirmed that two soldiers were being held in the Atahualpa area, north of Quito, by members of a community. “The two soldiers are fine. They were in civilian clothes in logistics activities,” he confirmed without revealing the status of the negotiations to release them.

The demonstration in Quito was the corollary to a series of mobilizations to protest reforms that President Guillermo Lasso intends to carry out and against the progressive rise in fuel prices in recent months. On Friday, in an attempt to curb the outrage of a part of the citizenry, the president announced the freezing of prices, which did not persuade either the unions or the social groups most affected by the crisis in the country. “The Ecuadorian people have expressed themselves today demonstrating once again their disagreement with the president’s liberal policies,” complained José Villavicencio, president of the UGTE, when he appealed to the Government to make the “freeze” based on the prices of the June and not September, much higher. “Lasso has not listened, and part of today’s mobilization is the issue of fuels, among other aspects,” he said. The scandal of the Pandora papers also weighed in the concentrations, in which the properties of the president appeared in tax havens until 2017.

Work, do not manifest

In a message on social networks, the president asked citizens to say “No” to the protests, considering that they affect the economy: “The paralysis represents economic losses for small businesses, which are the livelihood of thousands of families and homes. Ecuadorians “. Lasso remained in the Palace throughout the day, where he held meetings and work encounters, sources from the Ministry of Communication confirmed to EFE.

Since the morning the forces of order had blocked all accesses to the Plaza Grande to prevent a possible break-in at the Government Palace, with two security rings, one external to the Police and the other internal to the Armed Forces. “This is a day without winners or losers. When anarchist groups try to destroy the desire to produce and work, Ecuador loses,” the Defense Minister valued the episodes, recalling the Executive’s willingness to “dialogue, dialogue and dialogue” with all the groups.

Tonight, after a virtual meeting of its leaders, the indigenous movement decreed a second day of “resistance” for this Wednesday, in which he said that they will take to the streets again to demand a reduction in the price of fuel at the rates of June 11. This was stated by the president of the Confederation of Indigenous Nationalities of Ecuador (Conaie), Leonidas Iza, who set seven conditions to return to calm. Among them, also those of “demanding from the Government the immediate freedom of all comrades detained arbitrarily, unjustly and violently”, and “comprehensive reparation” for all the “brothers and sisters attacked” in “the police and military repression of the public force “this Tuesday.