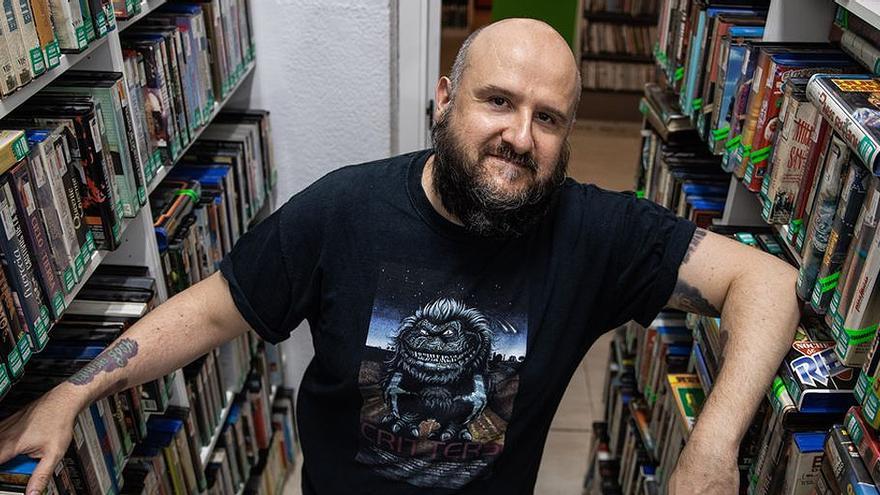 The phenomenon, today almost forgotten by the digitization of audiovisual content and the overwhelming supply of the internet and streaming platforms, was accompanied by a series of elements and rituals that have become part of pop mythology (The exalted covers, the devices to rewind the tapes, the fear of the surcharge for not meeting the return deadline, the curtain that delimited the space dedicated to adult cinema …) and altered the rules of the game in the film industry, forging new ways of making movies and consuming and appreciating them.

The journalist deals with all this with the erudition of a wise man and the passion of a collector. Xavi Sánchez Pons in ‘The video almanac’ (Males Herbes publishing house), a joyous evocation of the video store era that reviews the rise and fall of home video. To do this he uses abundant graphic material of the time and personal testimonies of film directors, producers, owners and dependents of video stores, film distributors and collectors. The result is a story embedded in the sentimental memory of several generations of Spaniards that is based on three main pillars: the apparatus, the movies and the club. With a final warning: “The revolution will be on VHS or it won’t be!”

The device: a video in each house

After some pioneering attempts at short-lived life, the first truly popular home video recorder and player, Sony’s Betamax, went on sale in May 1975. After 17 months, the JVC company launched the VHS format, which made up for its lower picture quality with a more affordable price, longer tapes and lighter players than its competitor. The battle between Beta and VHS systems (which was joined in 1979 by the Video 2000 developed by Philips and Grundig) marked the first decade of the video era, until JVC’s strategy of granting patents for its format to other manufacturers ended up tipping the scales in its favor and VHS took over the market.

The arrival of the first video players in homes lit the fuse of a revolution of stratospheric scope. “Watching home cinema now seems to us the most normal thing in the world, but before video the only possibility to do it were super 8 projectors, or more professional things, to which very few had access – underlines Sánchez Pons- . At first, meeting someone who had a video player was the bomb, because the experience was also shared. In my block, the first to have him was the neighbor of the 7th 2nd and I remember that we would go up to his apartment to watch movies ”.

The video soon entered practically every house. VHS reigned with ease in the last 15 years of the millennium until ending up being ousted by the irruption of the DVD. In 2016, Funai Electric, the only company in the world still making VHS players, abandoned the format. Sánchez Pons is “convinced” that they will soon be re-manufactured to meet the demand of old and new collectors, although for now amateurs have to turn to the second-hand market. “I myself recently bought a Firstline player through Wallapop from a family in Santa Eulàlia. It cost me 20 euros. When I went to look for him, they looked at me a little strange ”.

The movies: a voracious demand

The ‘underground’ filmmaker and collector Creeky Man points out in ‘The Video Almanac’ a rather astonishing fact: “Only 10% of the titles that were released on VHS have come out on DVD or Blu-ray”. Sánchez Pons puts the figure in context by recalling that in the second half of the 1980s “there was a beastly demand; Customers constantly demanded new titles from their video stores, and an inhuman number of films were being produced to cater for this voracity. In fact, plays by Andrés Pajares and Fernando Esteso filmed with a tripod were edited and people consumed them. Or genre films recorded between four friends with a domestic camera and blood made with ketchup that were published on video because there was a market for them ”.

Choosing some rare title among the VHS of Video Instan. ZOWY FEET

At the end of the same decade, the production companies they were already making more money with their video releases than with theatrical releases and they did not hesitate to invest large amounts to advertise their news. Sánchez Pons recalls the paradigmatic case of ‘Champion of champions’ (Robert Radler, 1989), a discreet martial arts film that was released directly on video in Spain and that “had a brutal promotional campaign, with television ads, ‘displays’ and all the paraphernalia. It was a ‘hit’ ”.

Another way to single out the films in the midst of such an avalanche were the covers, who, in their eagerness to attract attention, reached very memorable extremes of delirium. “The cover was everything,” confirms the author of ‘The video almanac’. Now, before watching a movie you have a thousand ways to find out, but at that time you were going blind, so you chose a title for the cover, which often featured images and slogans that had nothing to do with the actual content. The result was that you were very disappointed but also, from time to time, you had great epiphanies ”.

At first, Sánchez Pons points out, the video store business was something “very rudimentary” because “the border between legal and illegal was not at all clear.” Instant Videos, for example, the first video store that operated in Barcelona (and today one of the last survivors), it worked with a model similar to barter, in which the partners contributed one or more films (which in those pioneering days could cost between 15,000 and 20,000 pesetas and were almost always pirates) and exchanged them for others. In a short time the sector was regularized, the practice of renting tapes spread and there was a ‘boom’ spurred by rapid profits.

Each video store was a small temple of popular culture, with its officiant – that clerk who, as Sánchez Pons warns, had the same authority in the neighborhood “as a village apothecary” -, his congregation, his commandments (“return the rewound tapes ”), Its rituals and its ecstasies. “What is most romanticized in the book is the moment of entering the video store and walking through the corridors choosing the movies we were going to catch on the weekend; we could spend two hours looking at the shelves ”.

Aurora Depares, in Video Instan, the business that her parents founded and that today survives on Viladomat street. ALVARO MONK

On those shelves no distinctions were made between supposedly quality cinema and pure exploitation by-products destined directly for video; there Mariano Ozores looked Ingmar Bergman in the eye and that freed movie consumption from any possible elitist tic. “As it says [el director] Paco Plaza in the book, in the video store the taste was completely democratized. You watched ‘1997: Rescue in New York’ [John Carpenter, 1981] and ‘1990: Warriors of the Bronx’ [Enzo G. Castellari, 1982] and they seemed the same to you. That led to a whole generation of filmmakers being trained by mixing genres and B-series and big-budget products without having any hobbies. ”

The end (and the resistance)

The neighborhood video stores survived the peculiar competition of the so-called community videos (savvy entrepreneurs who wired the farm to offer a cinema program to the neighbors) and, with more difficulties, to the irruption of private televisions, but they ended up capitulating to the fiercest capitalism embodied in the irruption of the multinational chain Blockbuster, with its aggressive pricing policy. “The Blockbusters devastated and took the entire business,” says Sánchez Pons. They forced many neighborhood video stores to close and they increased the supply so much that later, when demand fell, they collapsed very quickly. His arrival was the beginning of the end ”.

With the definitive replacement of VHS by DVD the video-store era entered an agonizing phase. Today only a small number of surviving heroic establishments remain (just over 200 in all of Spain) and, yes, a small but growing core of collectors willing to overlook image imperfections in exchange for treasuring films on the same medium in which they were known decades ago. “Spain is an important collecting center, very focused on terror, fantasy and ‘bizarre’ – explains the author of ‘El almanaque del video’-. It is a very cult niche in which it is not strange that 2,000 or 3,000 euros are paid for a rare tape”.

Sánchez Pons insists on the need to ensure the preservation of the physical format – “there are thousands of films that only exist on VHS, Beta or 2,000 and that run the risk of being lost”, he warns – but points out that there are other ways to awaken the interest of new generations in the video era. “Making ‘stories’ of Instagram or Tik Tok with the VHS filter is already a way to keep alive the memory of what all that meant.”