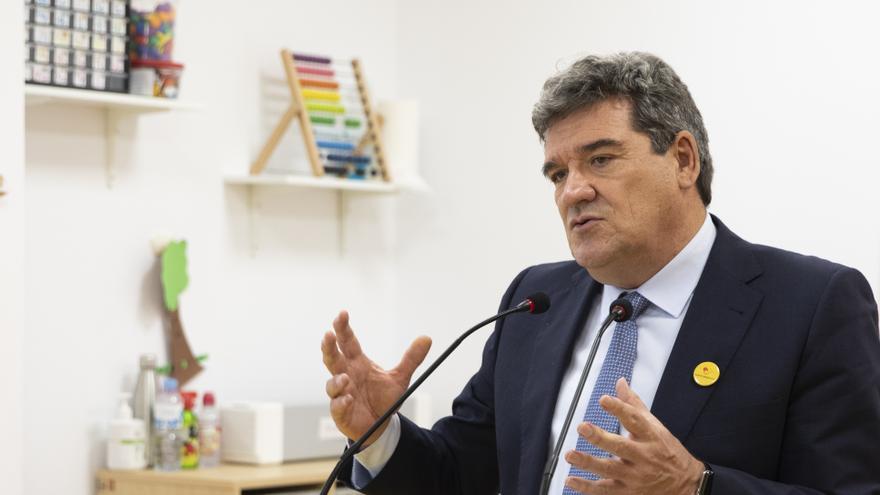 The Intergenerational Equity Mechanism (MEI) agreed last Monday by the Ministry of Inclusion, CCOO and UGT, will consist of a 0.6 percentage point rise in Social Security contributions over 10 years, with which they will end up getting for the pension piggy bank – according to Minister José Luis Escrivá – 50,000 million euros that will be used for weather the retirement of the large baby boom generation for the next 25 years. But the increase in contributions to the fund of the Social Security It was not the only possibility that was considered for the MEI: at the time, a (temporary) decrease in pensions or a (also temporary) increase in the retirement age was contemplated to make the system sustainable in the crucial decades that they come. If these clipping mechanisms have been chosen, the snip could have reached a decrease of 1.7% of annual pension spending over 10 years, based on calculations you have made for El Periódico de España the professor at the University of Valencia and researcher at the Valencian Institute for Economic Research (IVIE) Enrique Devesa.

That the cuts were on the table is evidenced by the explosive interview that Escrivá gave on television on July 1, two hours before the Prime Minister and union and employer leaders signed the first major pension agreement in a decade. Asked about how the Intergenerational Equity Mechanism (MEI) was going to be, which still had to be negotiated with the social agents, José Luis Escrivá assured then that it could consist of “a small adjustment in the pension, which would be very moderate, or alternatively, to work a little more. “These statements soured the signing of the agreement, casting the shadow of future cuts in a reform that until then had avoided them, and caused perplexity among social agents and great anger within the Executive. After a few hours of confusion, the episode ended up being resolved with a public retraction by Escrivá: the next day he assured that his words were “reflections aloud” on a mechanism “yet to be defined”, and added: “I didn’t have my best day yesterday.”

Doubts about the figures

Three and a half months later, the MEI that has finally been agreed with the UGT and Commissions only includes increases in spending and not cuts, something that has explicitly held unions: “The doomsayers, those who do not dare to tell pensioners what they would do (which is to increase the retirement age and lower pensions) have seen that there is another formula,” summarized Pepe Álvarez, from UGT; “We have changed the logic of the cut to improve revenues,” said Unai Sordo, from CCOO. According to the calculations that the Ministry of Inclusion sent during the negotiation to the social agents, the 0.6 percentage point rise in prices would amount to 2,800 million euros in 2023 and a little more in each of the subsequent years until 2032; That money, plus the interest that it would generate for being invested in public debt, would add up to 45,000 million, and to all that we would have to add the money that is already in the pension box (2,138 million) and its returns over 10 years ( 2,677 million): in total about 50,000 million with which to prop up the system for decades to come.

To reach the results that are now going to be achieved with new income via pension cuts, the adjustment would have to be hard: 2.8 billion a year for ten years They could only be achieved with a 1.7% annual reduction in pension spending, calculates Devesa (budgeted pension spending in 2021 is 163,297 million euros). Devesa, yes, questions both the forecasts of Inclusion for which the rise in contributions will contribute those 2,800 million annually (he believes that it will be more about 2,000 million a year) and the ministry’s estimate that these revenues, plus interest they generate, end up adding 50,000 million (in their calculations, the final result would be more of about 26.1 billion).

The income forecast of Escrivá also seems excessive to Ignacio Conde Ruiz, Professor of Economic Analysis at the Complutense University of Madrid and deputy director of the FEDEA think tank: according to his calculations, a 10-year rise in prices like the one approved by the MEI would bring about 20,000 million euros, and to achieve savings similar via cuts would not require pension cuts: it would be enough to not raise them as much as prices for a year. Thus, according to the estimates of Conde Ruiz, if the CPI this year ended on average at 2.8%, and instead of that amount the pensions were raised by 1.5% next year, the amount saved would reach 1,950 million in the first year, and after ten years it would have been avoided to pay 23,729 million euros that, otherwise, would have been dedicated to pensions. For this academic, this calculation shows that the agreed increase in contributions is very insufficient: “if the pension problem could be fixed by raising pensions a little below prices one year, it would be very easy to solve, we would not have this debate on its sustainability “, he emphasizes.