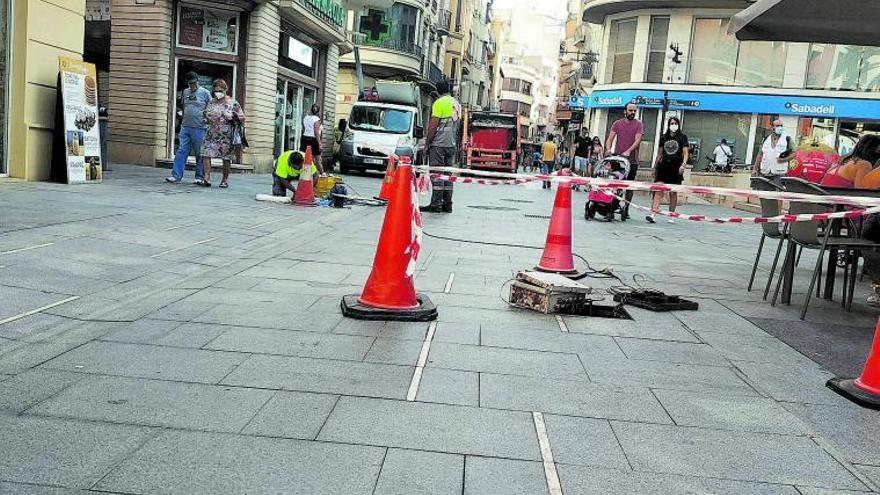 The street pedestrianization works Runner and of the Plaza de Baix has had hardly any criticism in the ten months they have elapsed since its execution. On the other hand, there have been many praises that it has received, mainly, among those who have seen in them a possible engine for the resurgence of the old town, with an open urban and commercial center (or restoration), which, if we attend to the amount of new rents it is generating, it seems to be on the right track. The City Council of Elche decided to bet on this remodeling for an ambitious project for what it meant in a city in which a large part of its neighbors travel everywhere by car, but at the same time it was cheap if we take into account that, running in the most noble part, the sidewalks were not going to be reformed. You just have to verify that it was not an expensive work, comparing it with others (there is Virgen de la Cabeza unfinished), if we look at the pastiche of soils that coexist today. You can see the old one, its patches and / or repairs and the one that has been put on. Of course, all crowned with a spectacular mosaic in the Plaça de Baix, which means that, in reality, it is visualized as two different works and not one, since there is no connection between the two. But there is, I insist, no one dissatisfied because it fulfills its primary function: the pedestrianization of the whole.

Now, if this government team (like the previous one) characterized by difficulties To carry out short-term projects (this week an elevator in a school was inaugurated by the mayor after years of vindication), it is striking that the most important auction of this pedestrianization is still pending, which is that part of the project that It does not go out to competition because it depends on the work of the councils that have to be involved in its execution. The pedestrianization of the Corridor and the Plaza de Baix it went much further because the traffic cut that it entailed was going to generate a series of added problems in a city divided by the bridges that cross the Vinalopó river bed and that should have been solved in unison with the project. We talked about the traffic that had to be diverted and how to solve it or who, when and how was it going to be possible to access that reserved area that is created in the entire historical axis of Elche. And this is one of those questions that has not been solved by far. And although the city ​​Hall He insists that, for example, Ángel Street has been pacified after turning it into the natural detour to downtown traffic (which should stop being so), the neighbors are throwing their teeth.

And yes, it must not be easy to educate drivers and delivery men of all kinds and around the clock because of e-commerce in such a drastic change, but as the months go by it seems that everything languishes. And, in the meantime, we have already gotten into the first major repairs, as happens with the renewal of all the LED lights that, if you go to other Spanish cities that have already installed similar ones, you will verify that either they worked there. In other words, we still don’t know when the Runner will look like that idyllic Runner they promised us.

In fact, to this day to park in it they park even the police vehicles or those of the municipal brigades and, if necessary, in the middle of the Glorieta. Trucks of all types and defects are seen every day (the proof is the many already broken tiles) that park for hours, as well as repair or delivery vans and pseudo-vans. That is without taking into account the fact that it is still a place where electric scooters and many bicycles pass at full speed, something that has become a constant complaint from users who seem to fall on a deaf ear, perhaps because of the lack of a patrol police or mobility agents reporting from day one, which has not been done because it should not be a priority.

The Corredora has needed for ten months a rational management of the loading and unloading, entry of taxis and private vehicles for residents or citizens with special needs and trucks and vans, but no one knows when it will take place despite the constant promises that it is being worked on. And this is something that was known from the first day that it was going to happen.

There is another important question. The Plaza de Baix It has remained like a very hard square due to the lack of shadows and in Elche the months of heat and sun There are many, but here we opted more for a spectacular design, which nobody disputes, than for practicality. And this generates that for many hours there is hardly any pedestrian traffic. In any case, note should be taken of another transformation -which our grandchildren will see- of the Plaça de las Flores and the old Central Market which, adding both spaces, seems to me as much more complex -it must be taken into account the safeguard of the ruins or the enhancement of the refuge from the Civil War – and the result of which the mayor trusted months ago to a contest of ideas.