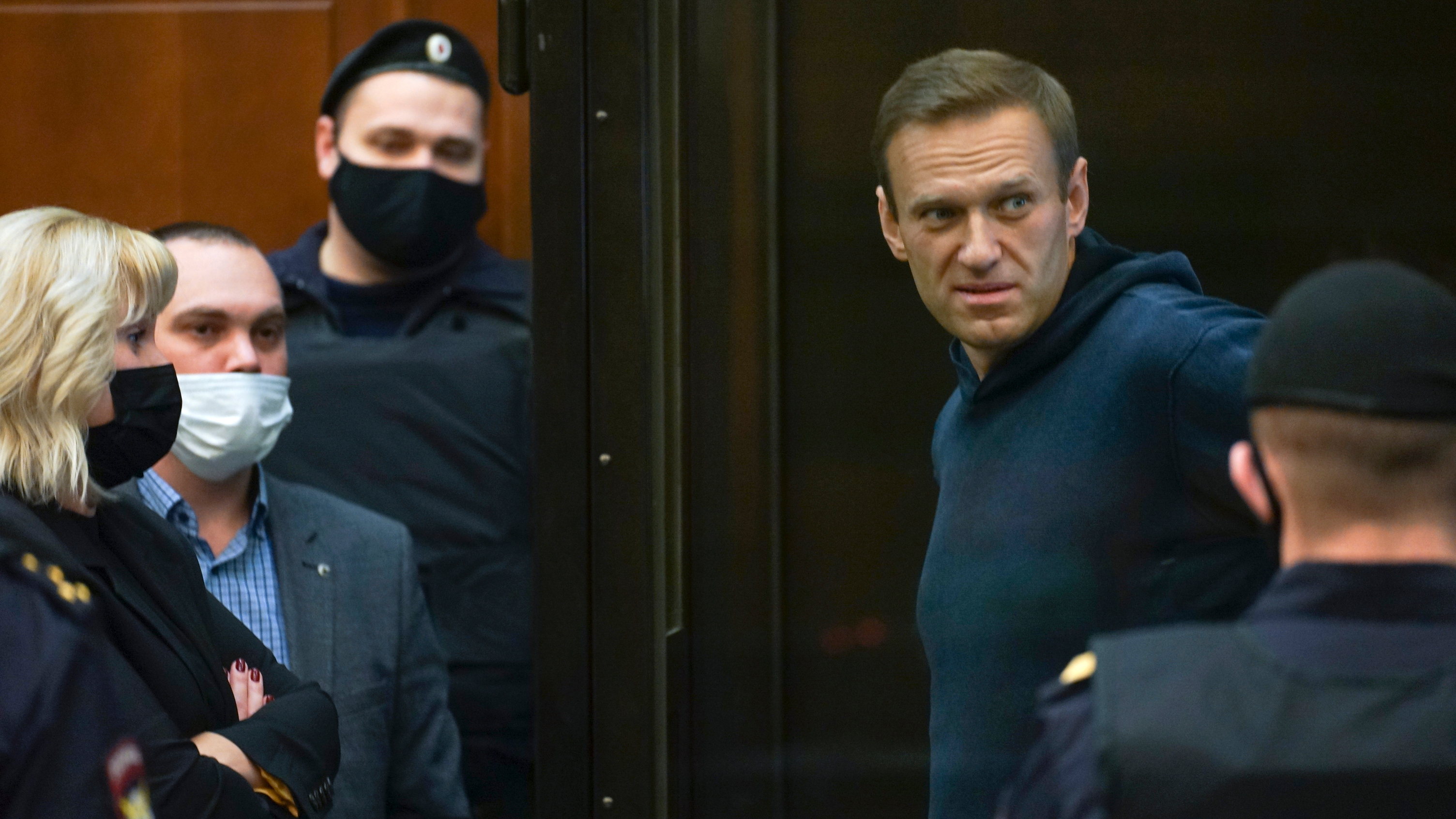 Alexéi Navalni has been sentenced to jail time. A Moscow court on Tuesday sentenced the prominent Russian opponent to enter a penal colony (a prison where people work) for repeatedly violating the terms of a 2014 fraud sentence and the probation imposed at the time for failing to appear for judicial reviews. The judge has deducted almost a year from that sentence for the 12 months in prison arrest that he served at the time. The effective penalty stays like this in two years and eight months. The ruling may inflame the already high tension between the Kremlin and the anti-corruption activist’s supporters. The authorities have deployed a large number of riot police in the center of Moscow and Saint Petersburg, in anticipation of new demonstrations in support of Navalni.

The prominent 44-year-old opponent, who was arrested after returning to Moscow from Germany, where he recovered from a serious poisoning suffered this summer in Siberia for which he directly blamed Russian President Vladimir Putin, has made an impetuous political speech during the court hearing. From the glass booth where the defendants traditionally sit, the dissident has assured that he will continue to fight and has charged against Putin: “As much as he pretends to be a great geopolitician, his main bitterness is that he will go down in history as a poisoner.”

Mass protests in support of the opposition leader in recent weeks have not achieved their goal. Nor was the criticism and pressure from Western countries that had demanded the release of Navalni, who has become the most visible critic against the Russian president and the man who has managed to promote the largest mobilizations of the last decade. The Russian authorities, who have also prosecuted their main allies, had already indicated that they would not be swayed by public pressure. And they have fulfilled it. Navalni is now cut off not only from politics – he was already vetoed in the 2018 presidential elections – but also from the streets. The sentence can make the social mobilizations deflate, but also give even more height to the opposition and promote protests.

“I really hope that this process is not perceived by people as a sign that they should be afraid,” he insisted before Judge Navalni, dressed in a navy blue sweater with a hood. The anti-corruption activist has praised the tens of thousands of people who have taken to the streets in numerous Russian cities, despite threats from the authorities and harsh arrests, and has assured that the political struggle will not stop. This Tuesday, dozens of his followers have come to support him on a crucial day in the vicinity of the Moscow Municipal Court, which has dawned completely surrounded by riot police and the police. They have arrested more than 300 people, according to the specialized organization Ovd-Info.

Navalni has responded with some irony to the accusations of the Prosecutor’s Office, which defended that there is no justification for the opponent not to go to the judicial reviews on his case and has tried to argue not only that he already failed to comply before leaving the country but also that he had no way of knowing that the activist was away in Germany, where he was unknowingly transferred on a medicalized plane. “He was in a coma,” Navalni remarked. “Could you explain to me how I could have fulfilled my obligations better? First I was unconscious, then conscious, later I had to learn to walk again “, said the prominent opponent, who has stressed that even the Russian president – who has sometimes referred to him as” the Berlin patient “for his hospitalization there – knew he was in Germany.

Navalni’s lawyers have argued that they were not notified that the activist was wanted until a few hours before he was placed on the list of people wanted by the Russian authorities. Since he regained consciousness, the opponent had always assured that he intended to return to Russia. And he did so despite the assurance that he would be arrested as soon as he set foot in Moscow and that the probability of being convicted was immense.

In the armored hearing on Tuesday, the judge has attended to the proposal of the prosecutor, who had demanded that the original sentence of three and a half years in prison regime that was suspended in 2014 be restored, although the time that the opponent served under house arrest.

The fact that the case behind the charges against the prominent opponent was declared “unfair and arbitrary” by the European Court of Human Rights in 2017 has further increased the unrest among Russian citizens. The Strasbourg-based court convicted Russia of violating the right to a fair trial of Alexei Navalni and his brother, Oleg. Both were convicted in the same process for embezzlement (about 500,000 euros) in two Russian firms, including the branch in the Eurasian country of the French cosmetics giant Yves Rocher.

Strasbourg ruled that Russia should pay each of the Navalni brothers 10,000 euros in damages and reimburse their legal costs: 45,000 euros for Alexei Navalni and 18,000 euros for Oleg. Navalni did not have to go to prison, but received what is called a “suspended sentence”; his brother Oleg did serve the full sentence: three and a half years in a penal colony. The same that the Russian Prosecutor’s Office is now demanding that it be reinstated for Alexei Navalni.

Despite the antiquity of the process and the ruling of the European Court of Human Rights, the case continued to remain there, like a bullet in the bedroom against the opponent. The ruling stated that Navalni should remain cleansed for six years after the verdict for the sentence to be definitively overturned, but the opponent has since accumulated other crimes in his file, especially related to his participation and organization of anti-Kremlin protests. So the case called Yves Rocher never stopped being on the fridge. Until the end of last year, when the process was resurrected and led to a new court case against the opponent.

The outrage over the new Navalni trial, who has been serving 30 days in preventive detention since January 18, added to public discontent over corruption, inequality and a difficult economic situation, have ignited protests against the Kremlin, which have shook Russia the last two weekends. On Sunday, an unprecedented police deployment in the main cities of Russia and the harsh repression of the security forces did not manage, however, to reduce the demonstrations, which ended with more than 5,100 detainees throughout the country, some under heavy violence, the use of batons and electric guns.

Among those arrested is Yulia Naválnaya, the wife of the opponent, who was fined 20,000 rubles (220 euros) for participating in the demonstration, and who was present this Tuesday at the trial against her husband. “I saw you on television in my cell. They say you are constantly violating public order. Bad girl! But I’m proud of you ”, Navalni has told him from the Aquarium on one side of the courtroom, lined with wood panels, where the opponent has remained throughout the trial.

The Russian government, which for years has tried to ignore the existence of Navalni, has defended the process against the opponent and has warned the West not to interfere in internal Russian politics. Kremlin spokesman Dmitri Peskov has insisted that he will not admit “sermons” on the subject. A spokeswoman for the Russian Foreign Ministry, María Zajárova, has charged against the fifteen Western diplomats who have attended the trial against the activist as observers, and has accused them of interference and of trying to “exert psychological pressure” on the judge in the case .

Navalni, who has become known for his revelations of the corruption of Russia’s political and economic elite, has become Vladimir Putin’s most visible critic. To him and to his supposed multimillionaire palace he dedicated precisely his latest report published on YouTube, which has spurred the protests.

The European Union and the United States have criticized Russia’s repression of peaceful protests and have called for the release of Navalni, whose main allies have also been prosecuted and are under house arrest, incommunicado. On Monday, on the eve of the visit to Moscow of the EU’s high representative for Foreign Policy, Josep Borrell, Martina Fietz, the deputy spokesperson for the German Chancellor, Angela Merkel, called for an end to “disproportionate actions against political protesters” and condemned the use of violence. “The detainees must be released immediately,” he claimed.

US Secretary of State Antony Blinken also charged against the Russian reaction. “The arrests, the violence used by the police is deeply disturbing,” he said Sunday in an interview with MSNBC. The protests caused by the arrest of Navalni reflect “the frustration that the Russian people have with corruption, with the autocracy,” he said.