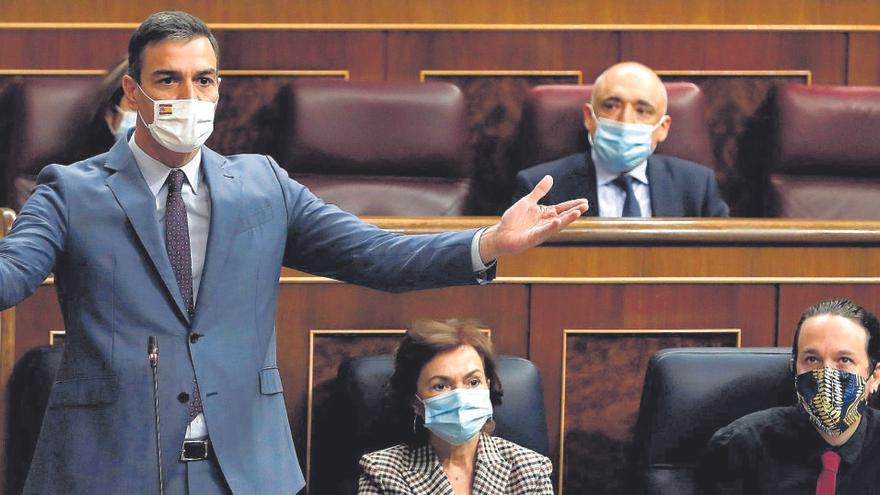 The pandemic that changed everything this year It also made a dent in the life of the Congress of Deputies, which despite the coldness of the vacuum in the seats, the masks of the parliamentarians or the restricted areas, once again became the center of the political debate. With more noise and tension than ever.

A 2020 that began with the investiture of Pedro Sánchez thanks to an apparently unstable majority that ends, after the approval of the budgets, with said majority reinforced and ready to set the agenda.

The most terrible year that Spanish society remembers due to the coronavirus leaves behind in the Lower House a string of bitter debates around states of alarm and their extensions or the management of the pandemic and with a legislative activity marked by the decisions that this crisis urged to take at every step.

But above all, let sad and unpublished images of a hemicycle that has not been filled again since the pandemic broke out or has not been able to host celebrations such as the celebration of the anniversary of the Constitution, and that nevertheless has witnessed the increasingly growing polarization of Spanish politics.

On January 7, Congress invested Pedro Sánchez and nothing foreshadowed the year that awaited both the first coalition government that was about to conform as to the most plural hemicycle of democracy, with ten parliamentary groups and nineteen parties.

At that time, on the contrary, it seemed that a long-awaited normality was coming to Congress after a year of interim and two general elections.

But only two months later the irruption of the pandemic turned the country and also the Chamber. On March 10, the first known contagion of a deputy -Javier Ortega Smith, of Vox- caused the suspension, at least momentary, of the activity.

The alarm and its extensions

On March 14, the Government decreed a state of alarm and Pedro Sánchez went to Congress four days later to explain the seriousness of the health crisis and the need for such a constitutional instrument. It was the first of seven long and intense debates in which the management of the coronavirus was discussed and the six successive extensions of the alarm were voted on.

If at first the entire parliamentary arch agreed on the alarm to face the unstoppable virus, that Fuenteovejuna did not last long. After a first extension supported by all, the second already had abstentions from sovereign parties and the third the first votes against, from Vox and the CUP.

It was from the fourth when the PP began to distance itself from the consensus with its abstention in that vote and its vote against in the two subsequent extensions.

But the Government was able to carry out the last two extensions. Thanks to the variable geometry and, above all, to agreements that overthrew preconceived alliances.

This was the case with Ciudadanos, who after the outbreak of the pandemic opted to support the Government and who took a 180 degree turn in their strategy by remaining alongside the Executive when the extensions were increasingly expensive to achieve, reaching agreements with conditions to support them.

Mirage of the new normal

On June 3, Congress approved the sixth and last extension of that state of alarm that lasted until 21 of that same. The de-escalation in restrictions first and the new normal later would not last long.

Because the virus never finished leaving and with the arrival of autumn the pandemic struck again with force.

That led the government to approve a new alarm state very different from the previous one, with the regional presidents as competent authorities and fewer restrictions than on the first occasion.

But this time, in addition, Sánchez wanted to ensure greater stability and after intense negotiations on October 29, Congress supported with a comfortable majority a six-month extension, until May 9, 2021, for this state of alarm.

Budgets of the new majority

If the Government has shown something in this parliamentary year, it has been its ability to find sufficient support in all crucial votes, playing on both sides of the board.

But for the most important vote of all, the balance definitely tipped. And the first General State Budgets of the coalition went ahead thanks to a majority that seems to have come to stay.

It is a majority much looser than that made possible by the investiture, because on this occasion ERC and Bildu – who then abstained – have opted for the “yes”.

And while all the alarms have gone off on the right -which believes that with these alliances the entire democratic system is shaken- the Government breathes calmly having some accounts on the table while the minority partner of the coalition, United We Can, rubs the hands because it has managed to get Ciudadanos out of the equation.

Because budgets have been the clearer example of the pressure that Podemos has not stopped exercising within the Government of coalition so that many of its promises were carried out and so that the balance of support would definitely tilt towards the left and the sovereignist parties.

Congress has witnessed much of this pressure, which came in all kinds of formats, from speeches by spokespersons to budget amendments signed with Esquerra and Bildu to stop evictions.

The PSOE, for its part, has had the upper hand in the negotiations with the other parties and has silently endured a good part of the stakes of its partner, despite the discomfort that they have caused on many occasions.

Another tension that has gone from latent to patent in this parliamentary year cannot be forgotten, the one experienced between the PP and Vox.

The coexistence in the bench on the right -Never peaceful at all- it was broken when during the debate on the motion of censure presented by Vox, the leader of the ‘popular’, Pablo Casado, struck out and said “enough” to the party of Santiago Abascal.

With one of the most applauded speeches of the year with which repositioned the PP in more moderate positions, Casado claimed not only the leadership of the opposition that his party already holds, but also the ability to be the only alternative to the progressive government.

A turn to the center with which the PP seeks to expand its electoral base, aware that it has time for it. Because there is, after the approval of the budgets, an election in sight.

Although it seems that everything has been noise in this parliamentary year, the legislative activity has also been intense, although with the pandemic as a priority and the royal decrees of the Government as the most used norm -more than thirty, compared to eight laws-.

Though Congress validated those decrees, at least nine of them should have been processed as bills – it was the condition of some groups to support them- but they are still in force without the original text because said processing is stopped. In many cases it takes months like this.

In an interview with EFE this week, the PP spokesperson, Cuca Gamarra, put that lack of processing as one of the examples of the way in which the Executive is “gagging” the Chamber.

But in the PSOE they do not see it that way, they explain that there are pending procedures for decrees that had to be approved because they contained urgent measures. And they deny that they are unemployed, while remembering that the budgets had priority or citing other important laws passed in these months, such as education and euthanasia.

In January – which will not be entirely unskilled – the parties will return to Congress and already have issues on the table such as the investigation commission of the Kitchen case to reform the General Council of the Judiciary to limit its functions while it is not renewed. Issues that with the new year can raise the already high tone of the House.