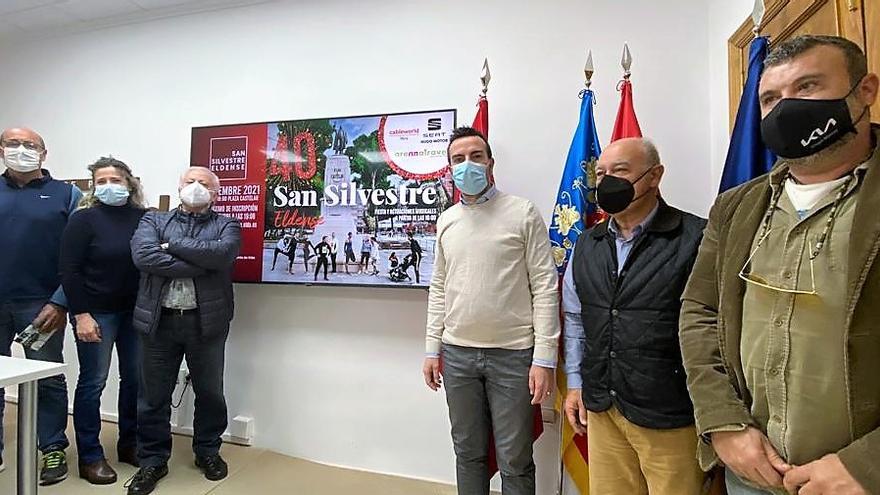 The City Council of Elda, through the Department of Sports, has opened the registration period for the San Silvestre Eldense, which this year will be in its 40th edition. The Councilor for Sports, Fernando Gomez, accompanied by the promoter of the first edition of the test, Ramon Gonzalez, in addition to the first winners, Felipe Miralles and María Teresa Bona, has explained that “Last year we could not celebrate this 40th birthday and, as you can imagine, this time the image of the test has focused on what happened and, of course, on the return of the test”.

The mayor of Sports has indicated that “We must boast of our last sporting event of the year, a sporting event, but mainly a festive and family event, of which we can be very proud. For this reason, I once again emphasize that it is the oldest in the province and the second oldest in the Valencian Community. The San Silvestre Eldense is more than consolidated with this 40th birthday and we are going to try to celebrate it in style but with the maximum possible security “. Gomez recalled that “Since we acceded to the local government, all the records have been improving year after year and we have turned the San Silvestre Eldense into one of the most participatory, giving an even more festive atmosphere, with more color, more sound and lighting. But I repeat that we are not looking for any record, and this year even less so, the objective of the organization that it be celebrated, that citizens enjoy it, and that we be an example of good work and solidarity among neighbors “.

For this, in addition to the Safety Plan that has been carried out in recent years, this time a Contingency Plan is incorporated against covid-19 that includes cleaning reinforcement, hydrogel, masks and the obligation to present a Covid Certificate, among other issues. The use of a mask will be mandatory at all times, except at the time the race begins and until the time the finish line is reached, although the organization recommends that it be used throughout the course.

Another novelty will be the incorporation of the number-chip for the arrival control, “Which will allow us to have more freedom after crossing the finish line and more access to Plaza Castelar and escape routes once the runners finish the race. In addition to the usual cash prizes in the different categories, this year we are adding a cumulative prize for those who beat the record time of the event. Both boys and girls will start with a cash prize of 150 euros, and if the record is not broken, they will be accumulated for the next edition “, has indicated the Councilor for Sports. Registration is still free and another novelty is that it will only be done online, a formula that has gained acceptance year after year and is more than consolidated. It will be through a renewed website: www.deportes.elda.es, where all the necessary information is available. Among all those who have not registered, a trip for two to the Caribbean will be raffled thanks to Arenna Travel.

The collection of numbers will take place in the Central Market, will begin on December 20 and will conclude on the day of the race. It will be done in a staggered manner depending on the day on which the registration is made. “Our San Silvestre -Gómez has indicated- It has become an event of enormous magnitude, as those who accompany me today can corroborate, and for the City of Elda its organization is not easy. Of course, it would not be possible without the collaboration of all the associations and groups that make it possible, such as the School Sports Council, FAVE, AMFI, Local Police, Civil Protection, Red Cross, Central Market merchants associations and Pablo Iglesias and Adjacent, the Enforma gym, a large number of sports clubs, and the support of many companies and businesses that provide prizes and gifts, especially for the most popular, with special thanks to the main sponsors: SEAT Hugo Motor, Cableworld and Arenna Travel that I have named before “.

Regarding the costume section, Fernando Gómez has stated that “This year it may be more complicated, but they are the essence of fun and offer us a lot of color. The best three will have outstanding prizes: a trip to Granada for the whole group that is considered the best costume, a dinner for the whole group that achieved second place and Christmas packages for the components of the third group”.

Among all those who remain to deliver the trophies, and who on this occasion must have crossed the finish line, gifts will be raffled off such as a BMX bike to use in our PumpTrack, a SEAT electric skateboard, a 55-inch television, an Ipad, and a video camera and a tracksuit from a First Division soccer team, among other gifts.

The 3,800-meter route will be the same and the circuit will run through the following streets: Exit at the intersection of Joaquín Coronel and Juan Carlos I streets, from there the runners will head towards Gran Avenida, towards Petrer until La Paz street, to go down Pablo Iglesias where the flying goal will be installed at the height of Cura Abad street . The race continues through Reina Victoria, Hernán Cortés, Avenida de Chapí, Antonio Maura, Calle Nueva, Ortega y Gasset, Dahellos, Hilarión Eslava, Cura Navarro, Padre Manjón, Antonino Vera, José María Pemán, Poeta Zorrilla and Juan Carlos I, until reach the goal located at the door of the Central Market.

The Plaza Castelar will be the nerve center, with the start, finish line and trophy delivery stage, where the party will begin with live music at 4:00 p.m. with the Superhits group. This year 5,000 running caps commemorating the 40th Anniversary will be distributed to the first 5,000 runners who arrive at Plaza Castelar.

Runners will once again have cloakroom service at the Enforma gym, and will have free parking in the Mercado Central, Gran Avenida, and Plaza FICIA car parks, thanks to AMFI. As in the last editions, there will be different setting areas, music in Plaza Castelar, a batucada at the flying goal located in Pablo Iglesias and music in Plaza de la Ficia.

Fernando Gómez has recommended that the registration not be left for the last day “And we ask those who run the San Silvestre to come well in advance to the starting line, following all the indications and precautions set by the organization”. Regarding the prizes, the first three classified in the different categories will receive a trophy and gifts: in the absolute category, both male and female, the first and first will also obtain a cash prize of 300 euros, the second 150 and the third out of 100. The first man and the first woman to cross the flying finish line will be rewarded with 100 euros and gifts.