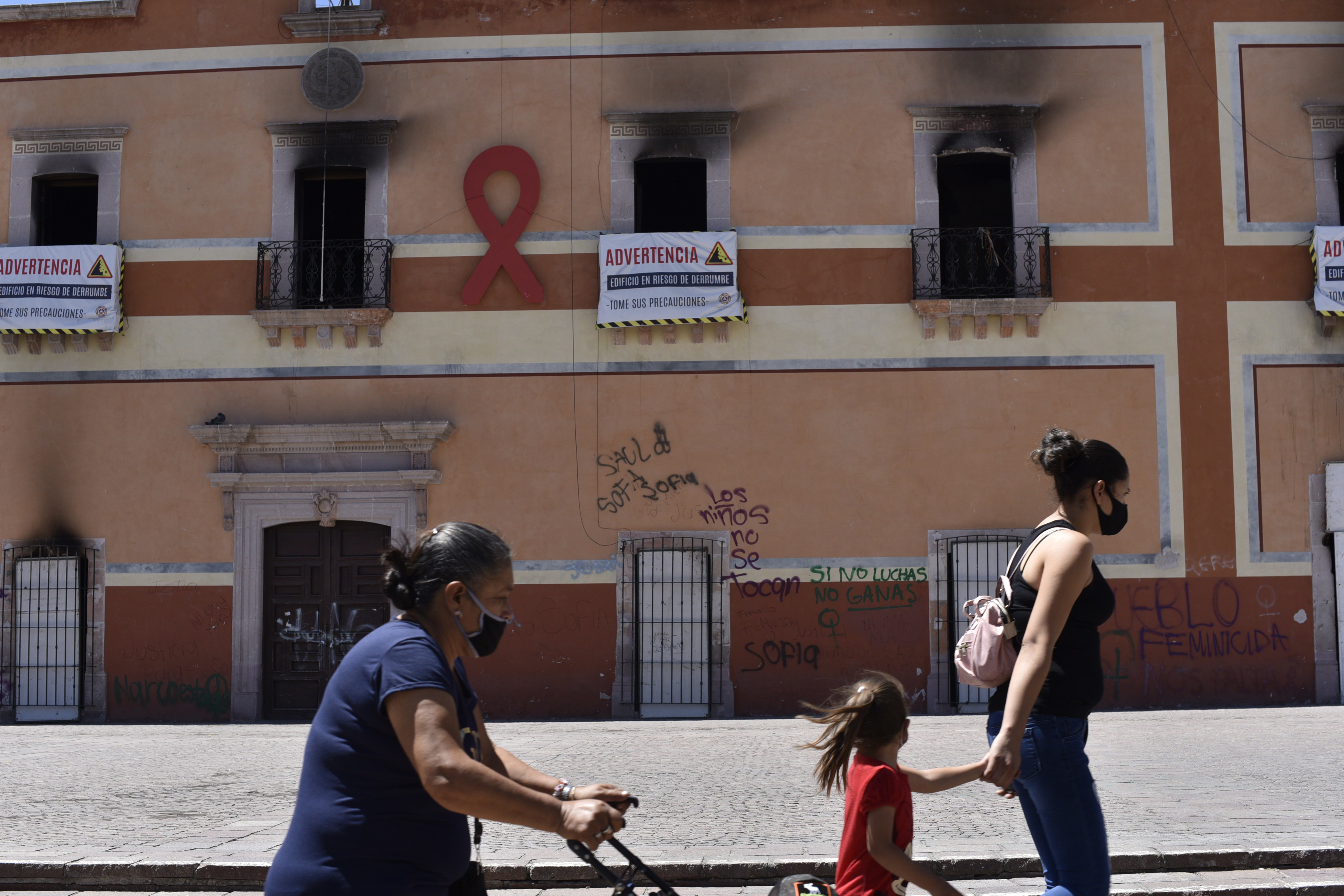 There are times when they have time to lower the metal grill of the store and lock themselves in the cellar. But when the bullets sound very close, Mariano and Carmen only get to hide at the end of the hall, between the French fries and the Doritos. Three weeks ago there were more than 10 shots right across the street. A group of hitmen had just assassinated the City Council’s deputy director of Urban Development at the door of his house. A few days earlier, a lawyer was shot dead on the same street as he was leaving his law firm. And last week, three other neighbors were shot a couple of blocks down.

In his 12 years at the helm of the grocery store, Mariano Rosales does not remember a worse time in Fresnillo, a municipality in the state of Zacatecas. “They have us very scarers. We are all day with Jesus in our mouth ”. The street of the shootings, less than five minutes walk from the city center, is called Tamaulipas. A macabre nod of chance to one of the most violent states in the country. The neighbors are scared – “We went out to the street entrusting ourselves to our father God,” says the upholsterer – due to the growth of murders and extortion, but even so they retain the proverbial Mexican black humor: the street has already been officially renamed Mataulipas.

On the day the City Council official was shot dead, another 14 people were killed in the city. With almost 250,000 inhabitants, the most populated of Zacatecas and one of its economic engines, Fresnillo leads the list of the national survey of perception of urban public safety, published quarterly by the statistical institute, Inegi. 95% of the inhabitants of Fresnillo consider that living in their city is not safe. Above hot spots like Ecatepec, in the State of Mexico, or Coatzacoalcos, in Veracruz.

The extreme situation in Fresnillo illustrates the wave of violence that is hitting the rural states of central Mexico, relatively quiet until a few years ago, far from both the gateways and drug production – the coasts and mountains – and the gates. exit through the northern border. But in recent years the map of organized crime has been getting wider and wider. Like Guanajuato, San Luis Potosí or Aguascalientes, Zacatecas has registered a vertiginous increase in the records of violence. In the last year, homicides grew more than 60%.

Its geographic location has made it the new object of desire for the Jalisco Nueva Generación Cartel (CJNG). Considered the most powerful mafia in Mexico, its networks have expanded in search of control of distribution routes to the United States through the east. And there, Zacatecas, and in particular Fresnillo, located literally in the center of the Mexican territory, plays a crucial role as one of the largest and most industrialized cities in the corridor that connects the Pacific ports with the exits to Coahuila, Nuevo León and Tamaulipas. . On that same route north, a few kilometers from Fresnillo, four state police officers guarding the highway were ambushed and burned to death in the patrol car last week.

Defying the desert plain that surrounds the city, giant wineries and metal warehouses stand on the banks that house maquilas, assembly plants for the automobile industry and three mines. Since colonial times, the area has been a vein of gold and silver. Fresnillo PLC It is the only Mexican company listed on the London Stock Exchange. With deposits also in Sonora and Durango, the jewel in the crown, its main deposit of unrefined silver is in the city, generating more than 10,000 direct jobs.

The climate of violence has also engulfed the mining company, with attacks on workers attributed to disputes between unions. “It’s a fucking riot everything. They say it’s the unions, but who knows? ”Says Miguel Macías, 32, before entering the mine. Orange helmet and fluorescent vest, he also says that two days ago, when he was taking his dog for a walk in the morning, he saw how two guys on a motorcycle shot a “guy who was washing the car outside his house.” And that in the afternoon “they found another dead man on the soccer field.”

The mayor of Fresnillo, Saúl Monreal, openly acknowledges the dimension of the problem: “The city has become an all-out war between organized crime,” he affirms in a Morena office in the old town. The Municipal Palace of Fresnillo, a couple of blocks away, has been closed since months ago a protest for the femicide of a minor ended with people storming the City Hall and burning several rooms. “It was an expression of anger,” sums up the mayor, who also acknowledges the existence of at least three mafias —Jalisco, Sinaloa and Noreste, the remnants of the Gulf cartel— but highlights one in particular: “For a year now the Jalisco Nueva Generación’s presence was what exacerbated the violence ”.

Fresnillo already lived a first black period. In the late 2000s, in President Felipe Calderón’s so-called drug war, the city was taken over by the Zetas. The regional boss, Iván Velázquez, known as Z-50, had his home in Fresnillo, where the Z-40, the boss of the mafia, Miguel Angel Treviño, was also a regular. The arrest of both, in 2012 and 2013 respectively, calmed the waters until the new current peak, with more drug trafficking actors involved and a new phenomenon: methamphetamine use is skyrocketing in the city, more than 50% in the last year, according to data from the Fresnillo Youth Integration Center (CIJ).

The wave of violence will be one of the central axes for the June 6 elections, which will renew the Chamber of Deputies and the governorships of 15 states. Among them Zacatecas, in the hands of the PRI, and which starts the campaign on April 4. In electoral terms, Monreal insistently emphasizes that the problem of insecurity transcends his municipality. “The situation is very serious, but not only in Fresnillo, throughout the State. People know that the issue of organized crime goes beyond our competence. It is state and federal. So I have made it known to the president ”. On February 27, the day that 15 murders were recorded in the city, Andrés Manuel López Obrador visited Fresnillo on one of his endless tours. And he ordered the reinforcement of security in the State with more than 300 members of the Army and the National Guard.

“To end monrealism is to end society”

Fresnillo is the cradle of the Monreal family. 14 brothers and almost half dedicated to politics. The sons of a leader of the PRI peasant union, the eldest, Ricardo Monreal (60 years old), is one of Morena’s heavyweights and one of his top gunners as head of the party’s bench in the Senate. His long career began here in the ranks of the PRI, covering Zacatecas inch by inch. Until its rupture to sweep in the state elections of 1998 in the ranks of the PRD.

“That’s where monrealism begins, which is a social movement, not a political one. Many subsequent governments have tried to end him, but to end monrealism is to end society, with the butcher, with the bolero, with the merchant. Monrealism is a doctrine, ”says Mayor Saúl. Another brother, David, is the gubernatorial candidate for Morena, having also served as mayor of Fresnillo.

The Monreal expansionism has been criticized inside and outside the party, divided today into two clear camps, as was staged in last year’s turbulent internal elections. The Morena elections in Zacatecas were also surrounded by controversy. The influential family raised Catalina Monreal, daughter of the Senator from Morena, as a candidate for state president. As in the national elections, the formation in Zacatecas was also unable to reach an agreement and for the moment it continues with an interim presidency. For the mayor of Fresnillo and Catalina’s uncle, “what has happened is normal. Morena emerges from different expressions. And who was in the presidency was not related to monrealism. They have their people, we have ours. We are trying to reconcile ”.

Before the creation of Morena, Benjamin Medrano was part of the Monreal team in Fresnillo, in the ranks then the Labor Party (PT). Today, a federal deputy for the PRI, and also a former mayor, he believes that “families as large as they have to make use of power.” But at the same time, he warns that “his brand is not the same as Morena’s. Monrealism is a movement disguised as a social movement, it is not genuine like that of López Obrador and has a history in the State associated with the chiefdom ”.

Medrano recognizes in any case that between the PRI and Morena, the Zacatecan electorate will vote in a majority for Morena. “But between David Monreal and Claudia Anaya (PRI candidate for the Going for Mexico coalition) it is something else. David has always lost and carries the image of having disappointed the ranchers ”. This will be the third time that Monreal is present to the assault of the governorship, after two defeats in front of the PT and Morena. The alleged fraud refers to the irregularities indicated by the Superior Audit of the Federation – about five million pesos – in a state cattle program in 2019, when the coordinator was the now candidate for governor for Morena.