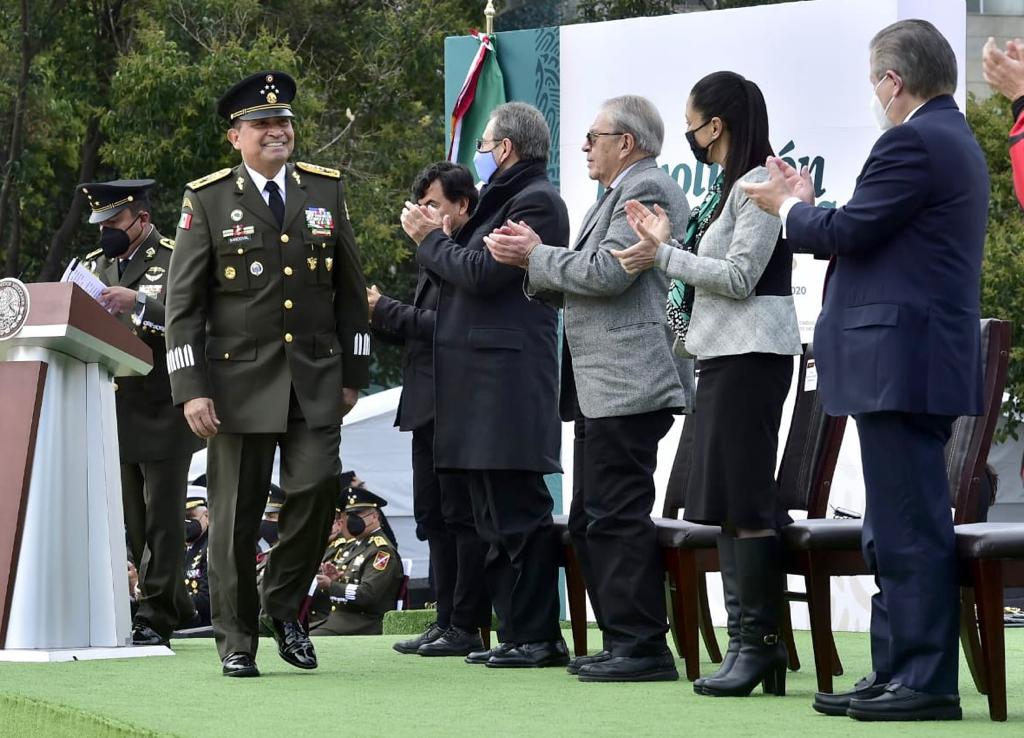 There were at least three novelties in the acts of celebration of the Mexican Revolution this year. The pandemic forced the crowds to reduce and just 400 soldiers paraded through the center of the capital with special masks. In addition, President Andrés Manuel López Obrador decided that the person in charge of the official speech would be Secretary of Defense Luis Cresencio Sandoval. A decision full of meaning when he arrived in full controversy over the transfer to Mexico of his predecessor, General Salvador Cienfuegos, after the charges of drug trafficking and money laundering in the United States had been dropped thanks to Mexican diplomatic pressure. Under these premises, the general’s speech, solemn and formal as required by the position and the date, inevitably acquired new readings. The usual formalities such as “the institutional loyalty of the Army is foolproof” or “it does not admit deviations” or “each one is forging his own way” sounded this time like the attempt to clear the blame from the entire military body.

López Obrador, always ready to capitalize on the legacy of historical figures of whom he proclaims himself heir – such as Francisco I. Madero, father of the Revolution that began 110 years ago – gave the pulpit to Sandoval in one of the most delicate moments for the Armed Forces . The serious charges imputed to Cienfuegos, beyond further eroding the six-year term and the figure of Enrique Peña Nieto, mean a torpedo for the credibility of the Army, which has become one of the fundamental pillars of López Obrador’s mandate, expanding as never his power and influence.

Mexico has managed to bring back the former Secretary of Defense after an unprecedented diplomatic campaign. Cienfuegos, incarcerated in a federal prison in New York, had already come to sit on the judge’s bench. However, Mexico interpreted from the outset the arrest and prosecution of what was one of its highest institutional authorities as a serious violation of bilateral security agreements. Cienfuegos had been under investigation for a decade by the federal drug agency (DEA). However, the Foreign Ministry was only notified of the operation on the day of the arrest, October 15. The reason for the agreement to withdraw the charges and send them to Mexico was reflected in the document that the Department of Justice presented this Monday before the judge to formalize the reversal: “the existence of delicate and important foreign policy considerations that weigh more than the government interest [de Estados Unidos] to prosecute and prosecute the accused ”.

Mexico now faces the enormous challenge of undertaking a rigorous and transparent investigation into the general, dispelling the doubts of partiality or favorable treatment that have hovered over Mexican public opinion since the agreement was known. The burden will fall on the Office of the Attorney General of the Republic (FGR), reformed just two years ago with the aspiration to gain autonomy from the Executive in the battle against corruption and impunity, but criticized for the final lukewarmness of the regulations, which does not it has contemplated constitutional reforms to shield said autonomy.

For now, López Obrador has continued to show his solid support for the Armed Forces. Since the day after Cienfuegos was arrested, the president has endeavored to defend the reputation of the Army and its Secretary of Defense. Sandoval was not directly recommended by Cienfuegos to succeed him, but he worked under the orders of the general arrested and released today and was promoted and decorated. During his speech, in addition to underlining the role of the Army as a pillar of the State, the “defense of the integrity, independence and sovereignty of the homeland”, Sandoval also staged a total closure of ranks with the Executive. ”We support the strategic projects of your Government. Obviously, we do not seek power, because we depend on the Executive and above all out of conviction, ”said the general.

The increase in military power during López Obrador’s mandate has not been limited only to the sphere of security, inaugurating a new body of military spirit such as the National Guard. During the last two years the military has taken on tasks as diverse as the distribution of medicines, the surveillance of pipelines and fuels of Pemex, the distribution of textbooks, the fight against sargassum or the transfer of money from social programs. The largest concession so far has been the confirmation, in March, that the construction and operation of the new Mexico City airport would fall into military hands. The Army will not only build the terminal, but will also operate civil and commercial operations through a company run by the military. The Army will also help build two sections of the Mayan Train, another public work that is the flag of the Administration.