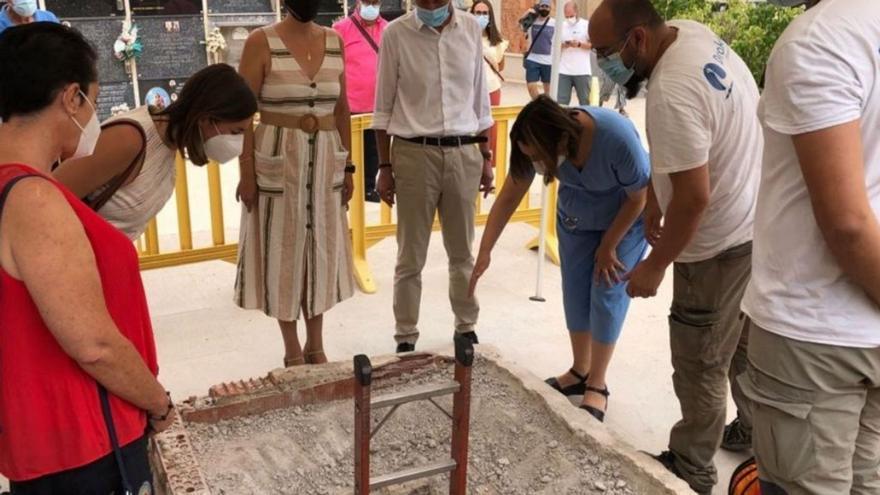 The municipal secretary has ratified in his report that the contract to carry out the exhumations of the Old Cemetery should have gone out to public tender. This is just one of the mistakes that the government team made when allowing a company to work for two months, without signing any contractual relationship with the City Council, in the cemetery to search for reprisals from the Franco regime. The local executive made public this Thursday the report of the municipal official commissioned by the mayor, Carlos González, to clarify the controversy, a letter in which administrative and criminal responsibilities and economic damage are ruled out, but it does confirm that there was an “irregularity administrative ».

The notary public reveals that the contract should have been put out to tender, which was managed as a minor procedure asking only three companies for a budget and that it should have been processed by the Contracting area, which is the one that had the powers for this.

«The initial classification of the contract as works, carried out initially by the municipal archaeologist, was not correct either, but, since the works are of a mixed nature, works and services, being that the amounts of the actions as services were superior to those of the actions of the nature of works, in accordance with what is established in the norm and also in jurisprudence, the contract should be considered services; which, in turn, by reason of the amount, higher than 15,000 euros, entailed its bidding through an open procedure, “says the municipal secretary. It was processed as a works contract, “without taking into account the polysemic nature of the word works and neither that the works involve different activities, work and services, being therefore of a mixed nature, and resulting in the service actions in this in case they are of a higher value than the works ”, explains the secretary.

Also Read  Bar code: 50 years of the invention that made the expansion of supermarkets possible

However, this mistake is the consequence of yet another one that municipal officials had not specified. The notary public detects an existing error in the drafting of the Budget Execution Bases, which led to a wrong processing also at that end, since these types of contracts are not delegated to the Councilor for Culture, but in the Contracting area, in the hands of Héctor Díez, whom the opposition asked to appear in plenary last week to clarify if he had something to do with the error. And that at the beginning of the mandate the powers of each area were distributed and the one directed by Marga Antón was allowed to take charge of minor contracts for supplies and services.

In any case, these failures are not the only ones that were committed, but there was, as the first mayor said, a concatenation of errors that led to the contract not being formalized. The secretary lists them. In the first place, it refers to the fact that the set of everything was induced and influenced by the call for a grant made by the Consell on December 23, 2020, which required having the work carried out and justified on November 2, 2022.

It also refers to the fact that the municipal archaeologist confuses the authorization of the Ministry of the works with which they could begin. It also points out that the failure at the time of processing the work as a minor contract and the error in the drafting of the Budget Execution Bases «have been decisive so that the hiring file was not substantiated and the work was undertaken by the company without contract”.

It concludes that the lack of experience of the technicians who were involved in the process, recently hired; the haste to carry out the works so as not to lose the subsidy and the errors in the document that defines the competences of each councilor were the causes of an “administrative irregularity that should not have been committed.”