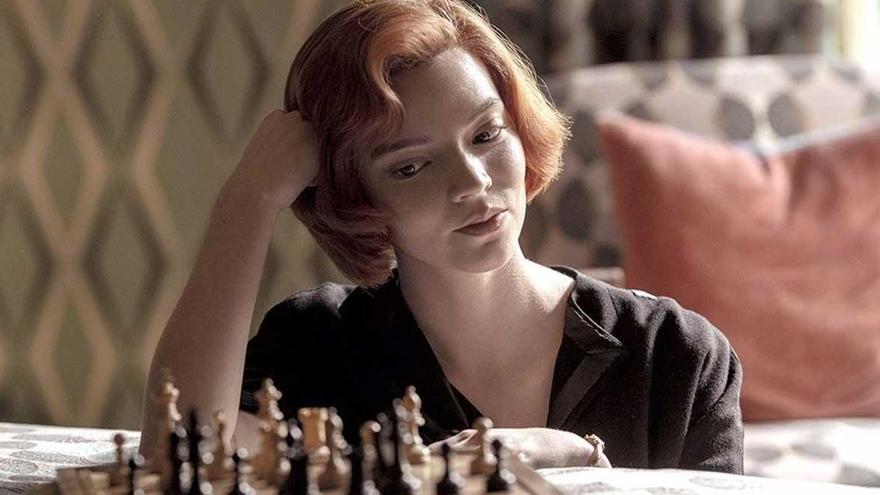 2020 has been the year of the definitive explosion of the series, with premieres that have shocked social and political life such as ‘Unorthodox’, ‘Colapso’ o ‘Mrs. America’; provocative, like ‘The Boys’ o ‘The Good Fight’, or capable of generating the desire to learn to play chess, such as ‘Lady’s gambit’.

Turned into an unexpected global phenomenon, it is one of the most watched series on Netflix this year. A seven-chapter story inspired by Walter Trevis’ novel of the same name, published in 1983, about Beth Harmon (Anya Taylor-Joy), a young orphan who stands as a world chess champion.

According to Trevis, to create the character he was inspired by players like Robert Fischer, Boris Spassky and Antoly Karpov, but above all by himself, having extensive experience playing professional chess and also with substance abuse.

After discovering Baby Yoda in the first season of ‘The Mandalorian’, the second has delved into the spell that this little green character causes in viewers who have become hooked on a series that is getting closer and closer to the original universe of ‘Star Wars’.

With the only problem of the short duration of its chapters, which always know little, ‘The Mandalorian’ has emerged as the great attraction of Disney +, with perfectly measured, spectacular stories that have been giving gifts to fans, such as the appearance of Boba Fett or seeing, for the first time, the face of Pedro Pascal as Mando.

Based on the true experiences of Deborah Feldman, who wrote her story in a book published in 2012, ‘Unorthodox’ tells the flight of a 19-year-old girl from a Hasidic community in Brooklyn to Berlin in search of her own identity.

The series was one of the most watched and talked about during the confinement of the first wave of the pandemic and made known on a large scale the customs and way of life of the ultra-Orthodox Jews of New York.

Cate Blanchet surprised many with her portrayal of Phyllis Schafly, a conservative and anti-feminist activist in this FX series premiered in Spain by HBO and which narrated the history of the movement to ratify the equal rights amendment in the United States and the backlash headed by this woman also known as “the bride of the silent majority”.

As the chapters progress, the main figures of the feminist movement, from Gloria Steinem (Rose Byrne) to Jill Ruckelshaus (Elizabeth Banks), their personal struggles and contradictions are revealed. The series also allows us to analyze the origin of the rhetoric of “Trumpism”.

Now in its fourth season, the series about the British royal family manages to remain among the most appreciated by critics and audiences each year. An idea of ​​its influence may be given by the fact that the British government recently asked Netflix to include a warning that the series is “fiction.”

The story has already reached the 80s and with it new characters such as Margaret Thatcher (Gillian Anderson) and a young Princess Diana (Emma Corrin) have been introduced, who bring a good dose of intrigue and change in Buckingham Palace.

Long before the COVID-19 radically impacted the world, the French collective Les Parasites (Jérémy Bernard, Guillaume Desjardins and Bastien Ughetto) began to fantasize about the idea of ​​total collapse, what would happen if the system collapses down suddenly.

The series, eight episodes of just 20 minutes shot in sequence, is a hyper-realistic dystopia that the pandemic has made even more disturbing and shows the fragility of the system based on infinite growth.

Written and produced by Michelle and Robert King, the creator couple also of their predecessor ‘The Good Wife’, where Christine Baranski already played the role of lawyer Diane Lockhart, this fourth season of ‘The Good Fight’, which was reduced to seven chapters due to the pandemic, it has been surpassed to become a cultural icon.

Few series so close to the current situation of a country like this to the politics of theirs, the US, whose plots immediately incorporated the triumph of Donald Trump, the feminist movement #MeeToo or the explicit rejection of Harvey Weinstein, with dreamlike illusions with which Diane wakes up every day, even as an attorney for a first lady who wants a divorce.

Based on the comic of the same name by Garth Ennis and Darick Robertson, ‘The Boys’ is the most irreverent and gore superhero series on television, with men and women who abuse their abilities, arrogant and corrupt, who shamelessly manipulate an infantilized, puritanical and conservative population.

The series follows in the footsteps of the Seven, a group of superheroes who work for the Vought International corporation, which has made them a trademark, who are faced by ‘The Boys’, led by Billy Butcher, who despises those with superpowers and They seek to kill them, above all, their leader, Patriota.

‘Could Destroy You’, HBO

The director, screenwriter and actress British Michaela Coel was working on the second season of the series ‘Chewing gum’ when she decided to take a break and go out for a drink. The next morning she begins to remember: someone had drugged her and abused her.

It took him more than two years to write about it and the result is this series that explores trauma, the question of sexual consent, non-committal relationships, and also friendship. Coel also assumes the main role, a casual and hedonistic girl, typical of her generation.

Based on the successful novel by Sally Rooney, there was much anticipation for the television adaptation of the Marianne and Connell story. Especially for the choice of actors to give life to these two young lovers from very different social classes.

The chosen ones were Daisy Edgar-Jones and Paul Mescal, two unknown faces who have become two of the great emerging stars thanks to a series that has managed to perfectly capture the atmosphere of the novel and the delicacy of a complex relationship that begins in high school and continues intermittently throughout college.