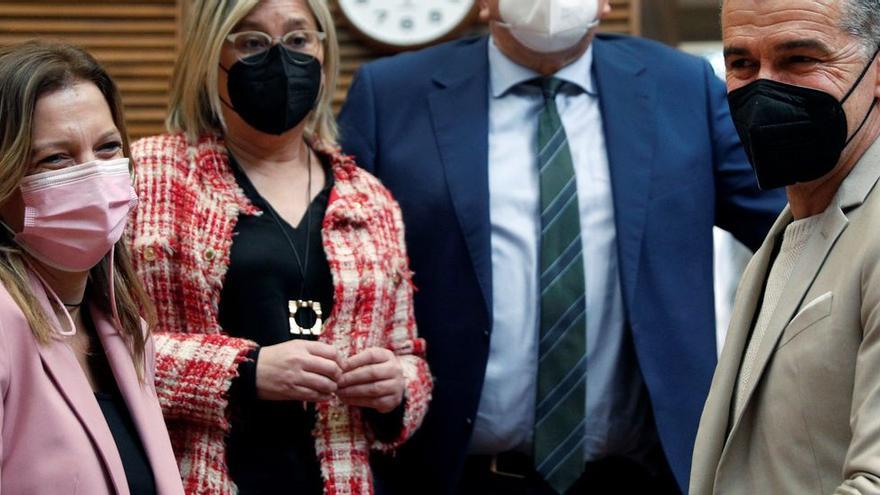 “Body to earth, ours are coming.” In the only sentence of the morning that Toni Cantó seemed not to have prepared and that he launched during his intervention in the control session in the Valencian Corts to the president, Ximo Puig, but it was addressed to the popular leader, Isabel Bonig, you can glimpse a part of the position in which the autonomous leader of Ciudadanos remains after the open clash with the national leadership of his party led by Inés Arrimadas.

A confrontation that puts Cantó to champion as a figure already of state relevance the internal discrepancy with Arrimadas after the new turn, now to the left after the alliance with the Murcian Socialists and what seems like a long-term break in relations at the national level with the PP.

A shock that can be of such magnitude that Cantó has already probed in internal meetings of his group in the Corts the support he has among the 18 parliamentarians for the hypothetical case that the internal conflict became entrenched and leaders of his party in Madrid with whom he is confronted, such as Carlos Cuadrado or José María Espejo, those closest to Arrimadas, could consider his replacement as parliamentary spokesperson.

And those “ours” in the opening sentence are the PP. The expression was made famous by the former Francoist minister Pío Cabanillas during the transition to refer to the fact that in politics the most dangerous are always the party colleagues. It is not that Toni Cantó and the popular Valencians are party companions. They are not, yet, but with the PP putting a lifeboat on whoever wants to jump from the Citizens’ ship about to capsize and the precedents of Cantó nothing can be ruled out.

The damage that “companions” can inflict is the definitive collapse of Ciudadanos if it ends up hitting bottom in the elections that, except for surprise, will be held in the Community of Madrid on May 4.

In this context, the process of approaching Cs, which Isabel Bonig wants to be without public exposure, Madrid speeds it up without any discretion. Yesterday, the popular Javier Maroto put Cantó as an example of charges of Citizens unhappy with the new swerve of his party that has led him to break alliances with the PP.

Maroto finished off that the popular ones do not close the doors to anyone, although Cantó denied in the Corts having evidence that officials from his party have discreetly contacted to go to the PP as the popular assures.

Cantó’s clash is not so much with Arrimadas as with the two leaders closest to the leader, the aforementioned Cuadrado and Espejo. The first, Cantó blames the failed strategy in Catalonia. But the Valencian leader of Cs is especially upset with the neglect to which the leadership of his party has subjected him.

He sang is part of the executive but no one had told him what was going to happen in Murcia. Contrary to other references with which he wove internal alliances like Juan Marín, the Andalusian vice-president, who yesterday responded to Cantó that the party was aware of the difficulties through which the PP-Cs coalition was going through in Murcia and he assured that it was announced to him from Madrid hours before.

Also Read  Afghanistan: The Taliban Strengthen Their Rapid Advance With The Taking Of Kandahar, The Second Largest City In The Country | International

In reference to the situation that his party is going through, Cantó assured yesterday in the Corts that he is very worried and that he had not spoken with Arrimadas because he will give his arguments when the executive meets. He also said that in the Valencian institutions, where Citizens govern with the PP, Alicante City Council and Alicante Provincial Council, nothing will change. That was it.

Great expectation in the Corts

Despite the great expectation yesterday in the corridors of the Corts, the orange leader said that he will first tell the leadership what he thinks and then the media.

What he thinks is that the party has been completely wrong. That Murcia’s motion of censure does not come at the right time or, of course, in the right way because it has caused a tsunami that leaves the party expelled from the government of the Community of Madrid, until now the mirror in which Cantó looked and the benchmark of all the policies that he wanted to export to the Valencian Community, and leads to elections, in the ones that except for surprise, Cs can hit bottom.

Disappeared in Galicia, the Basque Country, Catalonia and with a residual force in Congress (ten deputies out of 350) the party will no longer be able to recover from a disaster in Madrid, in an opinion shared by several leaders.

What is among many deputies is concern because the bases do not understand so much steering. But the biggest upset is the feeling that some officials have that the party is between four and that they are the ones who have wanted to implode him from within to go to the PSOE, they say.

There are also those who think that Cs can have a future with a focused project that shows itself capable of negotiating left and right and they believe that if Cs disappears, politics will become even more polarized with extremisms incapable of reaching agreements.