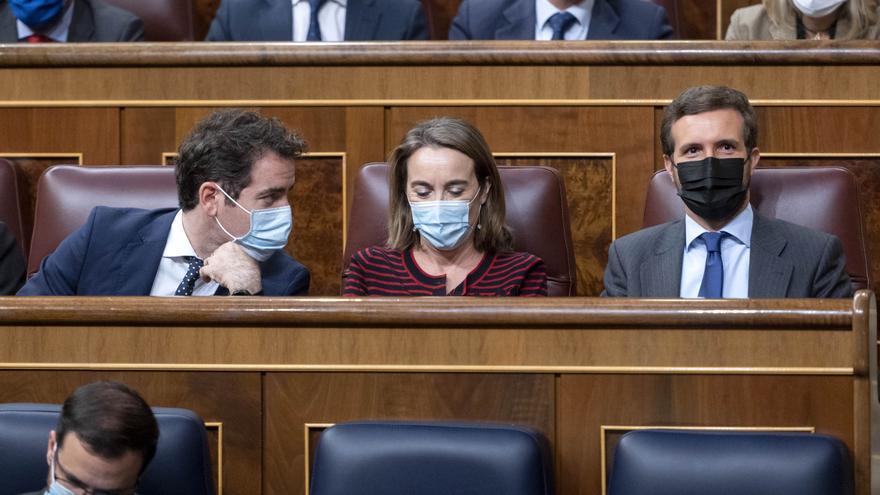 The PP has supported this year the approval of four laws with significant advances in the fight against sexist violence and has seconded the renewal of the State Pact Against Gender Violence. However, this willingness to agree on measures to combat violence against women contrasts with the minimal presence that this matter has in the discourse party audience.

The popular have voted in Parliament in favor of the law against violence in childhood, of the law that has ended with the judicial incapacitation of people with disabilities, of the law of urgent measures in terms of protection and assistance to victims of gender violence and, this same Tuesday, they have supported the bill that will improve the situation of minors orphaned by sexist violence. All these laws contain important measures against sexist abuse. In addition, on November 25 he signed the renewal of the State Pact together with the entire parliamentary arch (except the extreme right).

Is conciliatory attitude does not, however, have a reflection in his agenda, in their public demonstrations. The PP does not take heart of its role in the fight against gender violence, does not show understanding with the rest of the political forces in favor of the victims, but opts for discretion and adopts a low profile on these issues.

As an example, the day the Pact was signed – under the watchful eye of the Prime Minister and the Presidents of Congress and the Senate – the person in charge of sealing the agreement on behalf of the PP was Marga Prohens and not the spokesperson Cuca Gamarra , when the rest of the political forces sent their spokesmen to the event.

The space on the right has become more complex due to the presence of Vox, which systematically denies violence against women and harshly criticizes the PP with a tale of “soft right” by the position of the popular in matters like this.

Also Read  What stores and shopping centers open on December 31 and January 1?

Polarization and the fact of being in the opposition, and not in the Government, also influence when drawing up the roadmap of those issues to which the PP gives greater relevance.

What’s more, the power of the party is capitalized by Pablo Casado and its number two, Teodoro García Egea, who is characterized by an iron hand in almost all of his decisions. In the current leadership, Cuca Gamarra treasures the most relevant female role by occupying the parliamentary spokesperson (which is also convinced that the PP must fight for equality and has declared herself a feminist unlike many of her colleagues), although their powers do not interfere in party affairs. In the case of Ana Beltrán, Secretary of Organization, she shares many of the internal tasks with Egea himself, who in the end is the one who gives the green light to all important issues. Elvira Rodríguez is in charge of economic coordination and Ana Pastor was integrated into the management in 2020 as well. The conservative formation works in an absolutely hierarchical way and Casado delegates the day-to-day to his general secretary.

Gamarra defends in conversation with The newspaper of Spain that his party has an “unquestionable and unwavering commitment” to the fight against gender violence and he denies that it is absent from the popular discourse.

“We are coherent and we believe in the fight against gender violence and in the protection of women victims and their children. The PP will always be, not only supporting laws, but also in the drive for us to continue advancing. We are fully committed to it. proud of it and we say it over and over again, “he stresses.

The fight against all forms of violence against women and the defense of equal opportunities is a commitment of all for all.
Let us redouble our involvement to prevent and prosecute crime and protect, support and accompany victims.#NiUnaMenos pic.twitter.com/XiB1VlbFSe

However, sources linked to the party acknowledge that the PP “He does not know how to sell what he does and less on these issues“and they attribute the little significance of these issues to the philosophy of not using gender violence as an electoral tool or a weapon thrown between parties:” It is something for everyone, we have to be united. We will never vote against any measure that will improve this fight. ”

Gamarra emphasizes that the PP has played an active role in demanding that the Government comply fully with the State Pact, as well as demanding that they take seriously and investigate the sexual abuse of minors who are supervised by public administrations.

The laws with “yes” of the PP

This Tuesday, the PP supported the legal text that will prevent orphans of sexist violence from having to deal with a spiral of economic and bureaucratic difficulties after the loss of their mother. In addition to this law, that improve protection for the sons and daughters of murdered women In sexist crimes, the popular have backed three other initiatives this year with important measures against abuse.

The Law for the comprehensive protection of children and adolescents against violence has been very important, which prohibits the application of the so-called “parental alienation syndrome” (SAP) when determining custody of minors.

It also introduces, together with the Law to support people with disabilities in the exercise of their legal capacity -also supported by the PP- a paradigm shift in the regulation of the visitation regime for minors who live with victims of domestic and gender violence, a new legal approach in force since September.

Both norms include legal changes in the Criminal Procedure Law and the Civil Code to prevent visitation from being established in the context of a protection order for gender violence and to suspend it when the parent is involved in a criminal process for sexist violence or the judicial authority detects well-founded indications of abuse. In no case may there be visits when the parent is in prison or has been sentenced with a final judgment for abuse.

The popular also supported in March the law to ensure the protection and assistance to women and minors who are victims of gender violence and victims of trafficking for sexual exploitation in the context of the health emergency due to the coronavirus, which seeks to guarantee the operation of comprehensive assistance and protection services for these women in the context of the pandemic.

Abortion and ‘only yes is yes’

However, the provision to agree on issues related to gender violence in the sphere of the partner or ex-partner does not extend to other initiatives promoted by the Ministry of Equality.

This is the case of the project law of comprehensive guarantee of sexual freedom, the law of only yes is yes, against which the PP defended an amendment to the entirety, despite the fact that Minister Irene Montero extended her hand to reach consensus in order to better protect women against sexual crimes.

They will not be found in the reform of the abortion law prepared by the department of Montero, nor in the socialist bill that seeks to penalize harassment suffered by women in pregnancy termination clinics.

The 016 serves the victims of all violence against women. It is a free and confidential telephone that provides service in 53 languages ​​and leaves no trace on the bill. Information is also offered via email [email protected] and counseling and psychosocial care through the WhatsApp number 600 000 016. In addition, minors can contact the ANAR telephone number 900202010. All resources against gender violence.