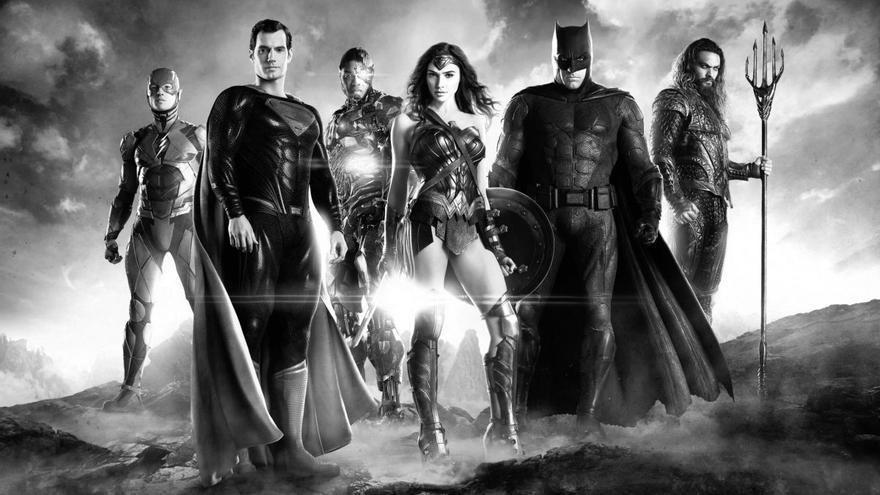 This weekend’s cinematic mega-event has exploded with great fanfare on digital platforms, rather than on the big screen. HBO brings us the four hours long of the hyperextended version of The Justice League of Zack Snyder. It is about the vision of the director’s film as he wanted to release it four years ago and that, after the changes that the studio made in its day, it became one of the louder failures who could have had a superhero movie. It was a time (and it still is) when the genre had proven to be more than just a fad and it was here to stay. The question is unavoidable, was the four hour duration necessary? Both versions are available on this platform, for those who want to compare them. Meanwhile, in the competition, Disney has released The Falcon and the Winter Soldier, waiting to reap the same or more success than Wandavision. The genre seems to be living a golden age of television, as much as its spectacular nature allows it to be one of the most enjoyed on the big screen. Online platforms against movie theaters, in a war in which the second every week that passes with the pandemic and the massive event restrictions they are losing ground. This mega event could have been worthy of its premiere on the big screen, but in current times Warner He no longer seems to be very much on the job and focuses more on the new platforms. It has already done so recently by simultaneously releasing the second installment of Wonder Woman of Patty Jenkins in theaters with HBO Max in the United States.

We were already used to the fact that, after a movie was released, the extended versions with added material came out on the domestic market, but never so much. It is twice the footage of one version compared to the other. For a title with a duration like this, on the online platform, we have the advantage that we can divide the time and even see it in pieces. But please, don’t see it on your mobile. The movie is told episodically, with six chapters and an epilogue. An author’s note or a concession to the seriéfilo viewer? Naturally, with all these additions, the film is much better than its predecessor, but what counts is the same and the plot burdens that it has, are also. It is not usual to see four-hour films, although since the series arrived we have become accustomed to these durations. After all, one season can be devoured into twelve. It would be better to enjoy the four hours of Justice League on a big screen with a big combo of popcorn and a giant soda glass, but the times we have had are what they are. The first three hours I got on well, but fatigue began to take hold of me in the fourth.

To the followers of DC and the work of the filmmaker, they will surely be passionate about the result. The rest will depend on the palates and demands that each one has. The Justice League movie is part of a saga that Zack Snyder started with his vision of the figure of Superman. In his resume, the filmmaker had the review he made of the zombie genre in The dawn of the Dead and other comic adaptations such as 300 Y Watchmen (Let’s see if HBO decides to bring it back to make comparisons with Damon Lindelof’s version). The director wanted to do with the superhero the same thing that he had already done Christopher Nolan with Batman. DC with these films leaned towards a superhero cinema with author’s stamp and for an adult audience, compared to adaptations of Marvel from Disney, designed for a more familiar audience.

A Man of steel in 2013, it was followed Batman vs Superman three years later and it was there that we began to glimpse that these films were preparing the large-scale landing of all DC characters for the big screen. The saga should have closed with two installments of The Justice League, the group that brings together all the heavyweights of the publisher, Batman, Superman, Wonder Woman, The Flash, Aquaman… characters with a long publishing career, icons in the world of comics and who began to be published when Marvel did not even exist. The Justice League should have been the great cinematic tribute to this group of superheroes. But it was not.

Disasters began to rage against this great production. The Warner chiefs were beginning to pressure Zack Snyder because his films were too serious. They wanted to introduce more humorous notes and to be more like what Marvel did, forcing changes in the script. In this context of struggles against studio executives, Snyder had to face a personal tragedy, the suicide of his daughter, which forced him to leave the film half finished. It was at that moment when the producers gave their blow of effect announcing the signing of Joss Whedon to finish it. Whedon, who had already built a reputation among the fandom with the Buffy the Vampire Slayer series, had been the architect of the success of the first film of The Avengers. His incorporation into the project was quite a coup, which could be similar to the impact of the fact that J. J. Abrams pasara de Star Trek a Star Wars,

Legend has it that the new director complied with the studio’s guidelines, re-shot some of the scenes and made his own montage, far removed from Snyder’s style. The film became a disappointment for critics and the public and garnered the worst grossing of the DC Extended Universe. To the point that other future adaptations of the publisher’s characters staggered. The anecdote that exemplifies how even the smallest details were complicated was put by the actor who plays Superman in these films, Henry Cavill, who at that time was also participating in the filming of a new installment of Mission Impossible and whose character in the franchise starring Tom Cruise he was contractually bound to wear a brand-new mustache and couldn’t shave it. Many of his shots in the Justice League movie are retouched to digitally erase that unwelcome mustache.

Also Read  The endless revolution of the Paris Commune | Culture

Whedon was supposed to have made some minor tweaks to Snyder’s work, but soon after the bump, rumors began to emerge that there was another cut by the director prior to his departure and that it put the film at the height of its two previous installments. Thus began a campaign, which culminated this weekend, for Snyder’s cut to see the light. The request had become a clamor. Even Whedon himself became persona non grata when some actors of the film began to appear accusing him of having created an unbreathable climate on the set. Situation that became uglier when part of the stars of Buffy, his magnum opus, also came to the fore making the same complaints. The director was finishing his new series for HBO, The nevers, whose production has ended up abandoning for personal reasons. The premiere is scheduled for April 11, but Whedon’s name has become a poison. The director’s fall from grace has only raised expectations for the Snyder Cut. The studio had given the director 70 million to be able to finish the movie he wanted, even shooting new scenes, and here we have it.

I think four hours is too long to finally tell us the same story they wanted to tell us. The short version is just that, a summary that on the editing table took away the flavor of many of the scenes. That choreography in the action moments so typical of Snyder’s cinema, with slowed down moments, which were essential for the atmosphere of the film. As well as all those scenes to give the necessary context to the secondary ones. The problem behind the new version of Snyder is that the enemy of the Justice League is still a second-rate character and, to tell us that, it does not take four hours. They promise us an arrival of Darkseid, the great villain who pulls the strings, but we do not know if one day we will get to see him, since this has become a cursed project. In Whedon’s version, Darkseid didn’t even appear

There are many sketches and crazy theories about where the shots will go in hypothetical future installments, but in the end the result is that we have swallowed four hours of film to see defeat a second-class enemy, no matter how many aesthetic adjustments that have been made to the character in the Snyder cut. Darkseid was a villain worthy of the title, capable of rubbing shoulders with the same Thanos from Marvel. Steppenwolf, do not. It was like the minions that were already making the Avengers sweat in Infinity war. Just a snack. Perhaps the grand prize of so many hours behind the couch is being able to have enjoyed a movie worthy of one of the most iconic superhero groups in history. So long it has served to show the epic and magic of seeing them all together on the big screen to save the world. But the plot leaves great cliffhangers that we do not know if they will be able to enjoy continuity. The uncertainties that still persist with the pandemic and whether one day we will be able to return to mass cinemas only increase those unknowns.

For now, Snyder is leaving and is no longer going to continue working on films in the DC Universe. His next project premieres in Netflix this same month of May. The army of the dead is the second part of the director’s first film, Dawn of the Dead, which in turn was a remake of the classic zombie film from George A. Romero. In the house that he has left, there are other projects underway for the DC universe and the latest hits have not completely buried the movies. New installments of Wonder Woman and Aquaman are in the pipeline, as well as a reboot of the Batman franchise featuring Robert pattinson like a bat man. DC character adaptations go their separate ways in film and on television. While in Marvel, movies and series are part of the same universe, in DC the plots of both media go separately. They even have different versions for each one, with different actors, as will happen with The Flash and as is already the case with the new Superman television series. If a few years ago, no one was confident that we would see that extended version of Justice League, perhaps the success of these new projects could make it a reality and remove the stigma of this blockbuster from being an unfinished film.