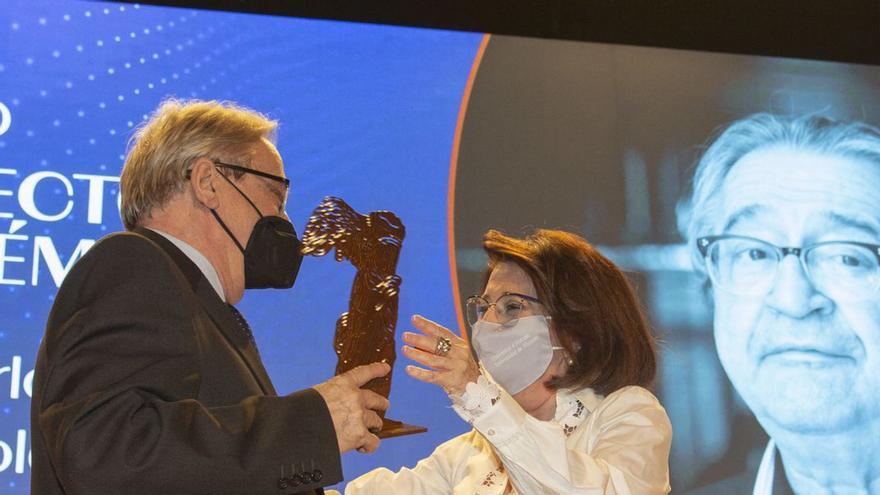 Utor stressed that a golden opportunity is being lost to change the governance of universities and to be able to place them in the excellence that we seek and have in other countries, so he concluded his intervention by urging the unity of those who represent citizens in any field to “work together in the amendment phase, for a law more consistent with the progress of society and sustainable development. You have to act to reform and not disappoint, “he said.

After his vindictive allegation, the Secretary of the Social Council, Aránzazu Calzada, gave way to the delivery of awards with an allegory to the statuette inspired by the Victory of Samothrace, because “there are people who deserve the Victory Award because they make the world more just and more humane, and on their way they trace the path of excellence.

These “common values”, the motto of the gala, identify all the winners as also highlighted in their speeches by both the Councilor for Universities, Carolina Pascual, and the rector, Amparo Navarro. The first supported Utor for his staging of “what university and society we want” and underlined the example given by the winners “to improve us all.”

The rector, for her part, emphasized the achievements of each and every one of the winners, again highlighting the merits that the Secretary of the Social Council had previously cited to proceed with the delivery of the statuettes and receive the applause and recognition of the attendees .

The president of the Red Cross, Francisco Galvañ, was the first to receive from the government sub-delegate in Alicante, Araceli Poblador, the work of the artist Toni Miró with which the Social Council applauds the involvement of the NGO in promoting volunteering.

Professionals from the UA Student Support Center, Patricia Soler, Joaquina Murcia, Irene Navas, Domingo Martínez, Tomás Ordóñez, María José Lucas Mañogil and Vanesa Moreno, went on stage as a group to receive the award given to them by the president of the Provincial Council, Carlos Mazón, for his social involvement towards students with special needs or those who suffer from some economic or social disadvantage.

Reyes Herce and Joaquín Manzano were handed over by the president of the Association of Entrepreneurs, Professionals and Directors of Alicante (AEPA), Marcela Fernández, for favoring the employability of students with Sprinter’s business practices.

The researcher Fernando Maestre, for his excellent career worldwide in the field of arid ecosystems, received the award from the Minister of Universities, Carolina Pascual; and the retired professor and now emeritus, José Carlos Rovira, at the hands of the rector herself, who merged in a heartfelt embrace with the professor who participated in the launch of the Virtual Library as vice rector, as well as the creation of the Center for Ibero-American Literary Studies Mario Benedetti.

Due to his outstanding career and professional involvement, the former student or UA Alumni, Juan Ramón Gil, general director of Contents of Alicante, Murcia and Andalusia at Prensa Ibérica, received the award from the president of the Committee on Relations with the Society of the UA, Cristina Rodes. The jury valued him as “one of the most influential voices in our journalism,” as Calzada pointed out. In turn, the territorial director of Hidraqua, Francisco Bartual, gave the statuette to the also Alumni Anabel García, who combines the musical group Mailers with teaching in Secondary and closed the gala with a highly applauded performance.

The award for their sporting merit was collected by Fernando Alarza and Iván Cano, who have led the UA to the Tokyo Olympic Games and to the top positions at the European level. The mayors of San Vicente, Jesús Villar, and of Alicante, Luis Barcala, presented them with their awards respectively.

One of the most emotional moments of the gala was starred by the members of the “Volunteering UA Collective Social Emergency” project, to whom the vice-rector for Equality, Eva Espinar, presented the award. With María José Rodríguez at the helm, they managed to mobilize a thousand volunteers during the pandemic to minimize its effects.

In the chapter on patronage, María Muñoz Blanco, general director for the Fight against the Digital Divide, received from the general secretary of the UA, Esther Algarra, the award for the Generational Digital Divide Chair, which investigates and trains for the good use of ICT to the elderly population.

The ASV Group received the Research patronage, for its active collaboration with the UA for more than six years on issues related to medical transport; and that of Artistic and Cultural patronage was collected by Julia Parra, first vice president of the Provincial Council, for the continued support of culture at the UA, especially at the MUA and the Classic Theater Festival of l’Alcúdia.

Finally, the Social Council has awarded Banco Santander in this fifth gala for its scholarship policy with UA students. The support of the entity to university education and its commitment to access to a quality university education led its territorial director in the Valencian Community and Murcia, Luis Rodríguez de la Fuente, to the stage of the Paraninfo, in which the president himself from the social organization, Adolfo Utor, presented him with the prize for patronage in training.

The performance of the Alicante Mailers put the end to an act that despite the masks, recovered the kisses and hugs.