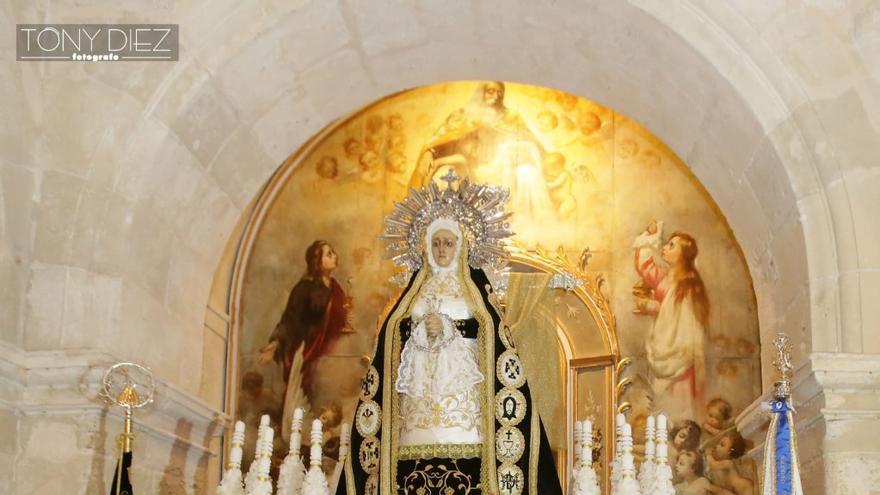 After almost twenty five years, the restoration of the ancient cloak of Our Lady of Solitude returns the light to a unique piece of brotherhood art. The image with canonical seat in the Basilica of Santa Maria look until next time Easter Sundayn the artistic mantle of procession recognized as “the mantle of Alicante and its Holy Week” or also called the cloak of shields, informs the brotherhood.

The image of the Soledad de Santa María, which historically closes the Official Procession of Good Friday and accompanied by the main ecclesiastical, civil and military authorities of the city, this piece shows in its chapel holder which has been adorned in a altar like the artistic monuments that were raised in the Parish of Santa María during the XIX century.

The date chosen for its replacement coincides with the celebration of the solemn act of worship and veneration that will be held on Holy Friday in the Basilica Santa María during the Holy Offices of the Lord’s Passion. Replacing the Official Procession, what has remained suspended because of covid-19, the main act will bring together in the basilica the brother brothers and main authorities around the venerated image of Our Lady of Solitude, one of the dedications that arouses the greatest devotion among the people of Alicante.

A mantle with Alicante flavor

The mantle of shields is a jewel of textile heritage belonging to the artistic treasure owned by the brotherhood of the Soledad de Santa María. The old image, which has presided over the altar of its chapel since the 19th century, wore the mantle without interruption from the eighties to 1999, the date on which the brotherhood commissioned in Lorca the imposing gala mantle that currently bears the Marian invocation in the Official Procession.

The AAncient mantle was paid for at the expense of the donations of his brother brothers and the preparation was due to the hands of the waitress Antonia López, under the direction of José Patricio Carrión. For a little over a year, the embroidery and sewing work of this mantle was carried out, which has the coat of arms of Alicante in its central part.

The three-and-a-half meter long piece of art is embroidered in gold thread on black velvet, and it has rhinestone applications in the floral motifs and in the embroidered butterflies that surround the central composition represented by the city’s coat of arms. On the front and bordering the workmanship, the embroidered emblems of the 16 brotherhoods and brotherhoods that made up the Semana Mayor at that time stand out.

The elder sister president Balbina Oncina has thanked the brothers and, especially, the waitress Maria de la Concepción Torregrosa the bet to recover the splendor of the mantle of the shields. It is a work that, as he highlighted, “brings together the exceptionality of being a piece of embroidery that, in addition to its artistic imprint, has sentimental significance for all the confreres and devotees of La Soledad and for the entire Holy Week in Alicante.

The altar of worship erected in honor of Soledad during this Holy Week. Tony Diez

Coinciding last year with the suspension of the Holy Week processions, the brotherhood decided to undertake the project for the realization of the Casa Cofrade “Soledad de Santa María” with the purpose of showing and preserving in good condition the rich processional heritage that the brotherhood has treasured since its bicentennial foundation. The inauguration took place on December 3 and featured the blessing of Bishop Jesús Murgui, who discovered together with the older sisters of La Soledad and San Pedro, Balbina Oncina and Carmen Iborra, the commemorative plaque of the event.

Once the artistic belongings were installed in the new brotherhood dependencies, the governing board decided to embark on the campaign to preserve their processional heritage. “The famous coat of shields has been the first piece chosen given the emotional meaning that it has for the confreres, since it was the mantle that the Virgin wore in the eighties ”, declared the older sister Balbina Oncina.

The cleaning and conservation work has been carried out entirely by the courtesy of the waitress María de la Concepción Torregrosa, who has spared no means or efforts to carry out this brotherhood campaign. “The intervention consisted of cleaning the metallic thread and embroidery, the alignment of the folds and deformations that some areas presented, and the reintegration and sewn with gold thread of the detached pieces on the base fabric. Despite the years, the mantle is in a perfect state of preservation ”, said its senior waitress.

The actions undertaken have guaranteed the material conservation and symbolic values ​​of this mantle that stands out for showing the Alicante coat of arms in the center of its composition, not in vain is the brotherhood that closes the Official Procession on Good Friday, the title image being guarded by City Hall Grand Gala Escortto and by the bishop of the diocese and the main civil and military authorities of the city. “The operational work has been carried out in the Casa Cofrade, since we have the infrastructure and the necessary equipment to undertake the performance of this unique large-format work”.

Members of the Governing Board at the official opening of the Chapel of La Soledad. Tony Diez

The brotherhood will once again star in the re-premiere of the mantle of the Virgen de la Soledad in Holy Week and, especially, on the night of Good Friday. It will be in the course of Solemn Act of Worship and Veneration in honor of the Blessed Virgin, to be held at 6:00 p.m. in the basilica of Alicante, when the image again wears the mantle with the shields of the brotherhoods and brotherhoods of Holy Week.

“The cloak will include inscribed inside the names of all the brotherhoods and brotherhoods that currently make up Holy Week, in addition to the names of the bishop, the dean of the Co-Cathedral, the rector of the Basilica of Santa María and the chaplain of the Junta Mayor. It is the personal tribute of our corporation to the sister entities and to the representatives of the diocesan Church in the city of Alicante ”, said President Balbina Oncina.