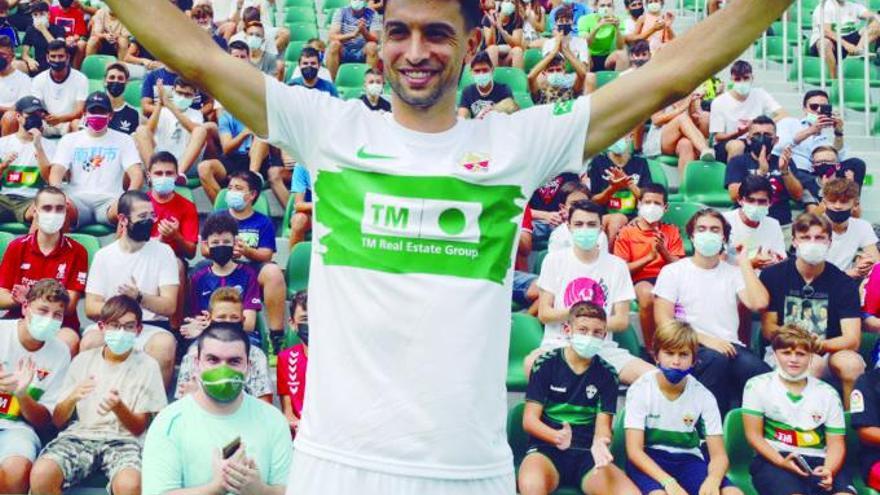 The forward is taking part and, practically, since his arrival he has been a fixture in Escribá’s starting eleven. Just three days after landing in Elche, as he came with a good preparation after doing the preseason with Olympique de Marseille, he entered the squad for the match of the second day against Atlético de Madrid. In the Metropolitan Wanda he made his debut in the last minutes and, from there, he has started in all the games, except in Villarreal, played on a week-long day, in which the Elche coach decided to make rotations.

Benedetto has played a total of eight games, six as a starter and accumulates 493 minutes, with an average of 62 per stake. He has made three shots on goal, seven away and has scored a goal. It debuted in the clash two days ago against Celta and that target seemed like it was going to be its final takeoff. However, last Sunday in Vallecas he played a fairly discreet game again.

The Argentine international recognized that his adaptation to Spanish football and the game of Elche, in which he needs to run and sacrifice more in defense than in his previous teams Boca Juniors and Olympique de Marsella, in which he stepped on more area, was not being easy and that he needed a process that he presumed to be long.

Benedetto shows his quality and when he comes into contact with the ball he gives the feeling that something could happen and, usually, he plays it with discretion. But be it because of the play of the Elche group or because it has not yet gotten used to its new setting, “El Pipa” does not finish showing its great qualities with which it shone in France and, above all, in Argentina.

Another different case is that of Javier Pastore. The midfielder arrived at Elche on September 6, with the summer transfer market already closed, after leaving Roma. “El Flaco” accumulated a year and a half without playing after an ordeal of injuries and needed a period of adaptation, recovery and tuning.

After a week training under Escribá, he made his debut on September 18 against Levante (1-1). He played the last 29 minutes and, although the lack of rhythm was noticed, he already left flashes of his enormous quality. Four days later in Villarreal he had a chance again and played 26 minutes. It seemed that, little by little, he was going to join the team and that Escribá was carrying out a progressive integration process.

But since the El Madrigal match, his role has faded. In San Sebastián, against Real Sociedad, he came out in the last three minutes, in desperation and after Oyarzabal’s goal, which gave the Donostiarras victory.

The October selection break also seemed like it was going to be the final and propitious one to finish getting in shape. However, in the last two games, against Celta and Rayo Vallecano, he has not played. Escribá excused his absence against the Galicians saying that the game was not for Pastore. That they were winning and that he needed another player profile in midfield like Gumbau. Last Sunday in Vallecas, despite being behind on the scoreboard and that Elche lacked football in the center of the field, Pastore did not appear either.

The Elche coach commented last Friday at the press conference prior to the crash against Rayo: “He is physically well, but, logically, he lacks rhythm because we must not forget that he had not played for a year and a half. With El Flaco you have to have peace of mind ». Escribá did not hesitate to affirm that “he will surely have his chance and will be the protagonist, because he has come for it.”

Despite those good words, for the moment, Pastore has no place in Escribá’s puzzle.

The other two signings this season of the so-called “stars”, such as Omar Mascarell and Lucas Pérez, are having more prominence and much more influence in the game than Benedetto and Pastore.

Mascarell has become a starter and an indisputable piece as a pivot ahead of the defense. The canary is performing remarkably and, right now, it is essential for the Elche group.

Lucas Pérez started strong scoring in his first two games and, although in the last stakes, he has not finished shining as in his beginnings, when he is on the field it shows and he is a dynamic footballer who contributes things in attack. Last Sunday he was a substitute against Rayo. Escribá opted for Benedetto and, now, the Elche coach has to decide on one or the other for Saturday’s game against Espanyol, because Lucas Boyé is immovable like the other forward.