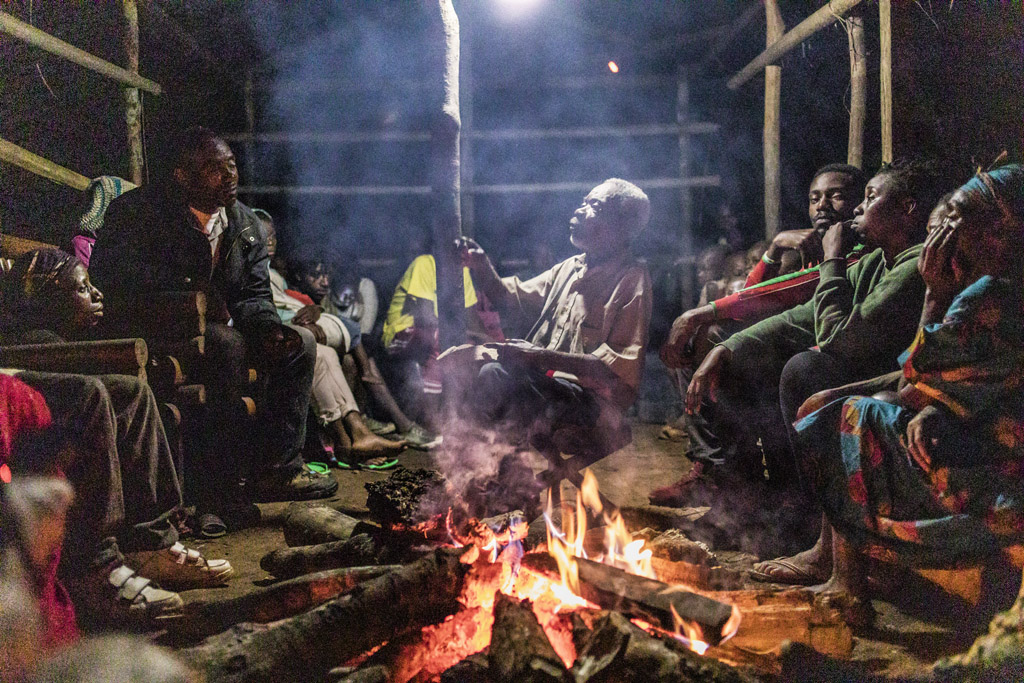 In November 2019, for 15 days, Ana Cristina Herreros (editor of Bad Company Books), Daniel Tornero (illustrator) and Kike Carbajal (photographer) traveled with the association Zerca and Far to the Baka Pygmy communities of Assok, Bemba II and Doum, which are located in southern Cameroon, with the intention of collecting stories from their oral tradition and later making a book with them.

The Baka are a minority people in danger of extinction. Expelled from their lands due to the economic anxiety of the extractive companies, their situation is further aggravated by not being recognized as an indigenous community by the Government and being treated in a discriminatory way by other groups, such as the Bantu, as indicated by the association. Thus, racist attitudes towards them and marginalization are maintained, “illnesses, alcoholism, rejection and exploitation are just some of the problems they have to face every day, along with the loss of their cultural identity”, they conclude.

To try to reverse the previous situation in Zerca y Lejos, they have been betting on inclusive education as a fundamental right for 20 years. Thus, the idea of ​​collecting old stories, tales or advice (likanó, in Baka), with the collaboration of Libros de las Malas Compañías, appeared as an opportunity to ensure that all this cultural heritage was not lost. The likanó, They explain to us from the association, “they speak of the importance of living together, of taking care of each other, of respecting the elderly, of loving people as they are, and, above all, of listening to everyone, also to children” .

Undoubtedly, when an activity of this type is carried out, it is vital to have the trust of the one who counts. Xavi Rodrigo, who participated in the collection of voices by Zerca y Lejos, explains how this first task was carried out thanks to the local part that was preparing the ground before the arrival of the team in charge of recording, collecting, photographing, drawing, translate and transcribe. One of the most surprising phenomena, he recounts with emotion when recalling it, was that a person was expressly counted for said work as a storyteller and, however, in the end it was the entire town, the elderly, adults and children who ended up narrating in community .

In the end it was the entire town, the elderly, adults and children who ended up narrating in community

In the heat of the bonfire, in their Baka language, they were unraveling threads of orality that transmitted their stories, their tales, their traditional advice. “Which have much more depth than what appears at first glance,” says Rodrigo. After the recording of the likanó, a Baka woman, Suzanne Abolo, was in charge of interpreting and transcribing them into French. Abolo, facilitator of the Zerca y Lejos Human Rights program, has been a key piece both for being a bridge between the community and the team, stimulating the participation of the population (especially women), and for helping the team to better understand the context. Later, Herreros closed the cycle by making the final translation into Spanish.

The result of all this work is The Jungle Book of the Baka Pygmies It is striking due to its large size, perhaps with the intention of emphasizing the importance of what it contains. Illustrated with drawings of Baka boys and girls, later treated by Tornero, it illuminates with the green that appears everywhere, a symbol of what they really are: the jungle itself. The work can be opened in both parts as the word “baka” is highlighted in the title in red, to read people’s stories or the word “jungle”, to delight ourselves by immersing ourselves in their habitat.

In the prologue that can be read online, Chema Caballero, great connoisseur of this reality and also author of the title Edjengui has fallen asleep, highlights that “the book reflects that ideal world that was the Baka paradise before its members were expelled from it by laws they do not understand. A world where Komba, the supreme god, lives with human beings and listens to them and that is why they lack nothing, where men and animals live in harmony and where the values ​​of friendship, sharing, mutual help and respect prevail. to the elderly above all ”.

The book thus becomes a double gift. It is a way of showing us other ways of being and being, at the same time that it brings us closer to another culture and invites us to notice what is truly important. For the Baka communities, as Rodrigo tells us, “it is a way for the boys and girls not to lose their identity, their origins and their tradition, a reinforcement against the danger of assimilation by other Bantu peoples”. In this sense, a return book is being planned, a simpler version in French.

Herreros tells us in this regard that “at the same time there is a project with Zerca y Lejos and the University of Burgos to train teachers who are in the Baka communities to create learning communities and that grandparents and grandmothers are included in education for let them not forget who they are and not be ashamed of it ”. With the purchase of this book, you are collaborating with the NGO and its commitment to education that they are carrying out in southern Cameroon.