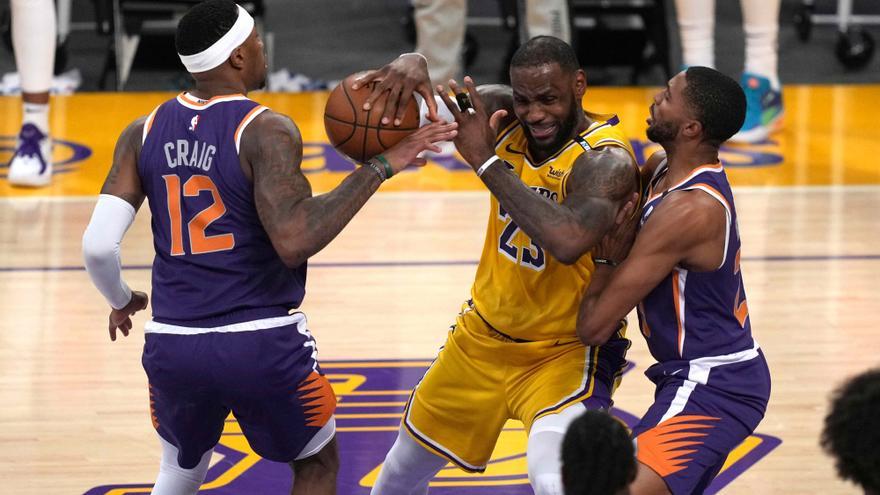 Devin Booker, with an impressive 47-point performance, struck down Los Angeles Lakers of LeBron James and Marc Gasol (100-113), which will not revalidate the ring obtained in the “bubble” after the Phoenix Suns will ring the bell and eliminated from the playoffs in the first round (2-4).

The tremendous failure of the Los Angeles team took shape in a night to be forgotten at the Staples Center in the Californian city. Booker slaughtered the reigning NBA champions with a heavenly first half in which he scored 33 points (7 of 8 from 3-pointers), just 8 less than the entire home team in the first half (41-62).

The Suns went on to win by 29 points in the second quarter and mercilessly shook a dejected LakersI know that, despite everything, they tried until the last moment a comeback that was impossible. In a fantastic collective performance by the Suns (51% shooting from fields and 3s), Booker was accompanied by a precise Jae Crowder who added 18 points, all of them in hot moments of the duel.

In the Lakers, LeBron James was the most outstanding with 29 points, 9 rebounds and 7 assists. Marc Gasol started and did not contribute points but did 7 assists and 3 rebounds in 17 minutes. Anthony Davis, who missed Game 5 with a groin injury, started for the Lakers but had to retire after playing just five minutes.

Although the Suns appeared throughout the series as a much stronger team, the collapse of the Lakers is still a huge surprise. Those in purple and gold were the great contender for the ring at the beginning of the season and their favoritism was only threatened when the Brooklyn Nets announced the signing of James Harden to accompany Kevin Durant and Kyrie Irving.

After proclaiming themselves champions last year, the Lakers moved boldly in the market and were reinforced with highly contrasted players such as Marc Gasol, Montrezl Harrell, Dennis Schroder and Wesley Matthews.

But the season has been an ordeal for the Lakers. Anthony Davis and LeBron James were out for weeks due to injury, Marc Gasol was infected with coronavirus, Andre Drummond arrived as a stellar signing in March but did not meet expectations, and a very irregular regular season finale sentenced them to the play-in after being seventh in the Western Conference.

The Lakers hoped to get a run, regain physical tone and sharpen their chemistry in the playoffs, butOr the Suns sent them home at the first exchange and in all fairness.

The Lakers had conspired to extend the series as it was until Game 7, but Devin Booker wasn’t for work. Lethal and totally unstoppable, the guard scored all six triples he tried in the first quarter, scored 22 points, scored the only 0-11 run for the Suns, and shattered both the Lakers’ defense and morale (14-36). The first quarter of the Phoenix team would have dreamed of any of their fans, since they shot to the basket with an amazing effectiveness (68% in field goals and 77% in triples).

The situation in the Lakers was the opposite. Marc Gasol came out as the starting center in place of Andre Drummond (he did not step on the court all night) and Anthony Davis gave hope of being recovered from the start. But Davis’ withdrawal, which was clearly not ready, was joined by a colossal lack of ideas and freshness in attack (29% in field shots).

Also Read  Can exercise have an effect similar to acetaminophen or ibuprofen?

Luck was not on the Angelenos’ side and their misfortune continued into the second quarter. Shots that came out of the inside, failures in easy shots, split plays that were going to stop the Suns … James tried to make war on his own, but a triple by Cameron Johnson after a new retaliation from the Suns took the game to a scandalous difference (18-45 in the absence of 8.31).

Clingy and without a trace of inspiration, the Lakers tried to hold on to any sign of hope in a miserable evening, so much so that their fans almost celebrated when the difference fell to 20 points (36-55 with 3.12 to be played). But little was asked to ask the Lakers in front of them had a Booker in their sauce and the Suns with a fabulous offense that dominated the first half at will (41-62).

To defeat a franchise with a streak of champions like the Lakers requires effort until the last second, and the Lakers turned to faith and pride to seek the miracle. For lack of desire it was not.

The third quarter started with Dennis Schroder and Kentavious Caldwell-Pope attacking the area, with Gasol distributing four consecutive assists, and with a fireproof James devising a hypothetical and still distant comeback. With basketball much more agile and intense than that of the first half, the Lakers gradually smoothed out the difference and a triple from a fighter Wesley Matthews made them believe in the machado (58-73 with 7.18 to be played).

It was time for the Suns to keep a cool head and nerves of steel, since, between a Schroder wasting effort and a tremendous dunk from James, the Lakers were already knocking at the door (64-77 with 4.42 missing). But those of Phoenix remained calm and from the free throws they kept a distance so as not to lose their heads (76-89).

The Lakers continued in the last quarter with the low five that with aggressiveness, physical work and multiple changes in defense had turned the game around, at least in terms of sensations. And there were moments when they believed in a magical night like when Caldwell-Pope placed the match within reach (84-94 with 8.06 to go).

However, at that moment the veteran Chris Paul appeared to lower the decibels with a partial of 0-7. In desperation, Talen Horton-Tucker scored three consecutive baskets for the hosts, including a great dunk after an offensive rebound. But Crowder, perhaps the most hated rival by Los Angeles fans in this series, appeared as the perfect enemy to score two 3-pointers in the final stretch that shattered the Lakers’ dreams.