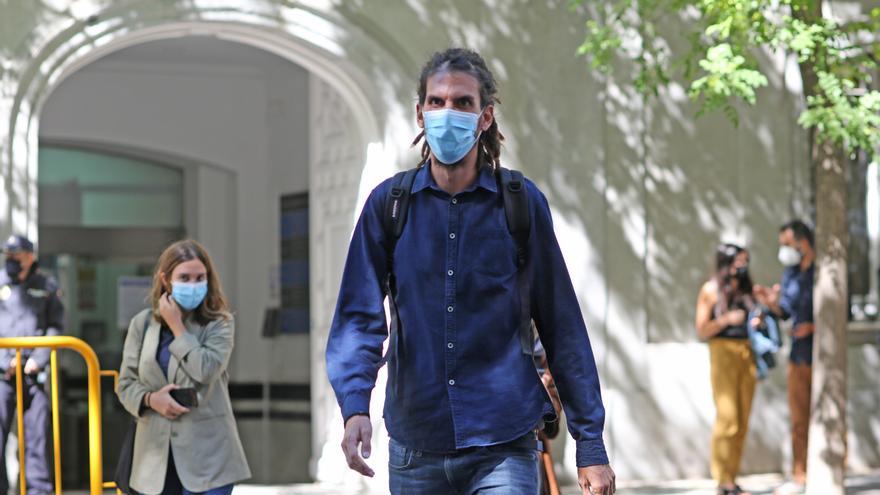 The Supreme Court has sentenced the deputy of United we can Alberto Rodríguez as the author of a crime of attack on agents of the authority, with the highly qualified extenuating circumstance of undue delay, at the penalty of one month and 15 days in prison, with the accessory of special disqualification for the right to passive suffrage during the time of the sentence, which supposed to lose his seat. The prison sentence is replaced by a fine of 90 days with a daily fee of 6 euros, which adds up to a total of 540 euros.

Rodríguez is acquitted of a minor offense of injuries, as a result of the decriminalization of misdemeanors in 2015, although he will have to pay 50 euros as compensation for civil liability to policeman who, according to proven facts, kicked him in a demonstration in 2014 in La Laguna (Tenerife). The ruling adds that the sentence be notified to the Central Electoral Board for appropriate purposes, since it includes disqualification from public office and implies that Rodríguez must leave Congress.

The sentence has the private vote of two of the seven magistrates, Susana Polo and Leopoldo Puente, who made up the court, who consider that he should also have been acquitted of the crime of attack, understanding that the evidence practiced in the oral proceedings “was far” from being sufficient to enervate the presumption of innocence.

The sentence declares proven that on January 25, 2014, in the town of La Laguna, on the occasion of the reopening of the cathedral, various events were organized that the then Minister of Education and Culture, José Ignacio Wert, was scheduled to attend. , which led to the call for a demonstration with the slogan “Rejection of the LOMCE”.

Around 11.00 in the morning, after the braided fence placed by the police as protection in the vicinity of the cathedral, the a group of about 500 people that “they began to shout and insult the agents and the aforementioned minister.”

“At a certain moment, the congregation began to attack the fence, throwing the fences against the agents, as well as various objects such as stones, water bottles and others”, Says the sentence, which indicates that this“ motivated a police unit that was prepared as a reaction, to stand between the fence and those gathered, trying to maintain the line of protection, and assisting the agents who proceeded to arrest those whom they had seen develop a more aggressive attitude ”.

The account adds that “in the course of the physical confrontations that, as a consequence of the violent attitude of some of those gathered, had place between them and police officers, the defendant Alberto Rodríguez (…), who at that time was among the first, kicked an officer in the knee who, duly uniformed, was fulfilling the functions of his position as a member of the aforementioned police unit, who As a result of that, he suffered a contusion from which he cured in one day without impediment to his usual activities.

The Supreme Court argues that, in order to determine the assault on the agent and its authorship, the evidence it has taken into account is, fundamentally, the statement of the affected police officer, who “in his statements did not express any doubt that the accused was who voluntarily kicked him in his left knee, in the course of the incidents that took place ”.