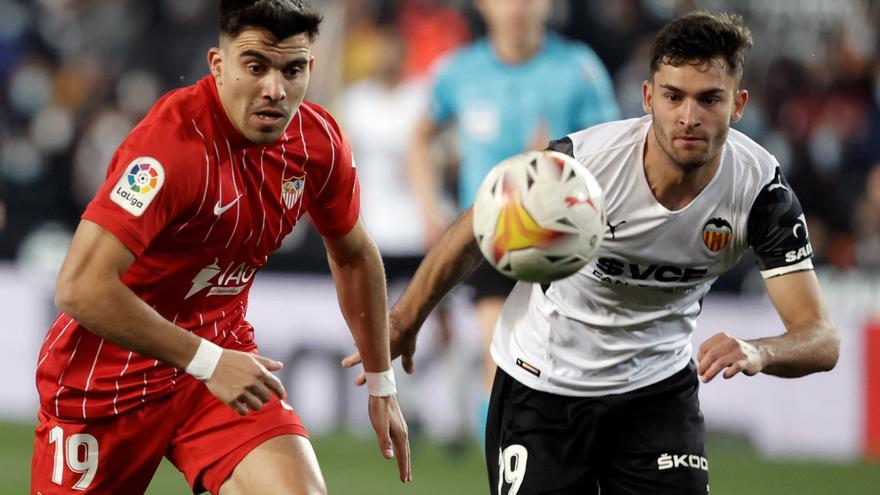 The Sevilla could only equalize one goal on his visit to Valencia after an intense duel, in which the goals came in the first half, after a early both at Diakhaby’s own doorstep and the local draw through Guedes shortly before the break.

The Andalusians enjoyed the clearest chances of the game, especially in the first half, while in the second the match was more physical, the chances were fewer although the Mexican debutant Tecatito was able to give Sevilla the victory in the final stretch of the match

The game soon went awry for Valencia and on Sevilla’s first approach to goal Diakhaby scored an own goal trying to keep Montiel’s pass from reaching the far post where Rafa Mir was already ready for the shot.

But the misfortunes did not end there for the local team, the referee annulled Gayà’s goal for offside and a minute later the Dutch goalkeeper Jasper Cillessen retired injured, who shortly before had avoided Sevilla’s second header from Ocampos.

The Andalusian team did a lot of damage against, especially on the right wing, and Bordalás decided to reinforce his atypical spinal line by advancing the position of the central defender Diakhaby. The tactical movement was effective, since Valencia became the owner of the game and launched with a push in search of the tie.

But it was still Sevilla was the one that gave the most sense of danger and in the final stretch of the first half, Mir beat the young debutant Christian Mosquera in a melee and his shot was repelled by the post. They went from a possible 0-2 to a draw, after a great assist from Gayá that Guedes headed from close range, to sign his eighth goal of the season.

After the draw, the game got dirty after a scuffle between Gayà and Montiel, which revved up the shock in the final minutes of the first act.

The passage through the changing rooms was used by Sevilla to replace the revolutionized Acuña with Joan Jordan, while Bordalás recomposed his team by bringing on Lato and also doubling the winger on the left flank and returning Diakhaby to the center of the defence.

Valencia exhibited a suffocating high pressure which greatly complicated the departure of the Sevilla team, unable to appear with the controlled ball in the vicinity of the Valencian field until the halfway point of the second act was passed, the locals began to feel the physical effort.

In the last quarter of an hour, both technicians gave a offensive message to his team, giving entrance to Tecatito Corona, who made his debut in LaLiga, in the Seville ranks and the Brazilian striker Marcos André for the ‘chés’.

Precisely the Mexican was able to give his team the victory in the 85th minute, but his shot over the goalkeeper Domenech’s exit went wide. The Valencian captain Gayá was sent off for a double warning in the 88th minute, which caused Sevilla to turn in search of a triumph ‘in extremis’, to get within two points of the leader Real Madrid, who finally did not arrive.

Also Read  Volcanoes and the Moon, between Heaven and Hell | Cosmic Void

Referee: César Soto Grande (C. Riojano). He admonished Lato for Valencia and expelled Gayà, due to a double warning (m.89), and Acuña, Óliver and Montiel for Sevilla.

Incidents: Match corresponding to matchday 21 of LaLiga played at Mestalla before 26,049 spectators.

Incidents: A minute of silence was observed and the Valencia players wore a black armband in memory of Cayetana and Vera, the two girls who died in a tragic accident at a Christmas fair in the Valencian town of Mislata.