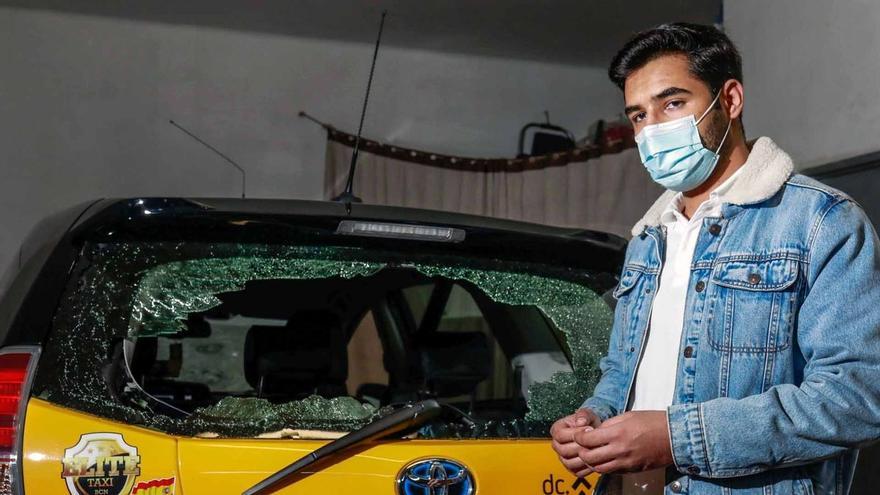 Ahsan was driving the taxi that he shares with his brother during the night shift from Saturday to Sunday. When there were just a few minutes to one in the morning, on the edge of the curfew that empties the streets to try to contain the virulent spread of the omicron variant by order of the health authorities, a couple requested their services as they passed through the square Mare de Déu del Pilar, in Hospitalet de Llobregat. He stopped the car, but the one who first got into his back seat was a big man he hadn’t seen yet. The man carried in his hand a crystal glass, I did not use a mask and it seemed to be under the influence of alcohol. “I asked him to put on the mask and throw the glass away because I couldn’t put it in”, Ahsan explains to El Periódico de Catalunya, newspaper of the same group, Prensa Ibérica, as this newspaper. The man did not want to put on the mask, nor did he want to throw away the glass.

His refusal started an argument between him and one of his friends, the male who was part of the couple who had called Ahsan’s attention to stop the taxi. “They started screaming and all of a sudden the glass cup broke inside the car,” he recalls. The bursting of the glass prompted the customer to strike out at Ahsan. “He punched me in the forehead and I wanted to run away,” he details. But, due to nervousness, he did not manage to unbuckle his seat belt until the second attempt. And when he got out of the taxi to flee, the customer caught up with him again outside and, with an extension bar deployed, according to the taxi driver’s version, hit him on the arm. Next, the assailant’s friend grabbed Ahsan to immobilize him, grabbing him by the chest.

After these first two blows, the customer went to the rear window and smashed it with a punch. Then he returned to Ahsan, who was still immobilized by his friend. Between the two of them, they threw the taxi driver to the ground and kicked and punched him in the back area. Neither Ahsan knows how many blows he received nor is he very sure how long the attack lasted. Yes you remember clearly that no one came to help him even though there were more people at that time in that place. “While it lasted, no one came to help me,” he remarks sadly. Before ending the beating, the attackers They grabbed his cell phone and smashed it on the ground. Then they left.

The only help Ahsan received came after the attack. One of those present approached him to tell him that he had recognized one of the assailants: he was the owner of a bar in L’Hospitalet. And another taxi driver, a civilian from Ahsan, who was born in Pakistan, gave him the phone.

At four in the morning, Ahsan went to the CAP of El Prat de Llobregat, the municipality in which he resides, to be treated. From there he came out with a report of injuries that he delivered to the police station of the Mossos d’Esquadra of that locality. His statement, collected in a complaint that Ahsan has shown to this newspaper, has an audiovisual evidence: the recording of a video camera – also contributed to this newspaper – that the victim had installed for security in the car cabin for ten days, specifically since another taxi driver was attacked by a knife in the center of Barcelona.

The events have outraged the taxi community, which is studying protest mobilizations. They have also reactivated the need to legislate the use of video cameras in taxis, a measure that is not yet properly authorized.

“The worst was not the blows but the fear that you have left. Fear of being attacked another night ”, explains Ahsan, who, like so many other taxi drivers, removed the screen in summer because it prevented the air conditioning from reaching customers and they protested. The car, which received more damage than the attackers caused with a belt buckle, will be operational again at the end of the week if the replacement windows arrive. Having it parked means leaving Ahsan’s family, who has a son, and his brother, who has three children, without income. A punishment added to the beating that is not covered by insurance. The Mossos have opened an investigation but there are still no arrests.