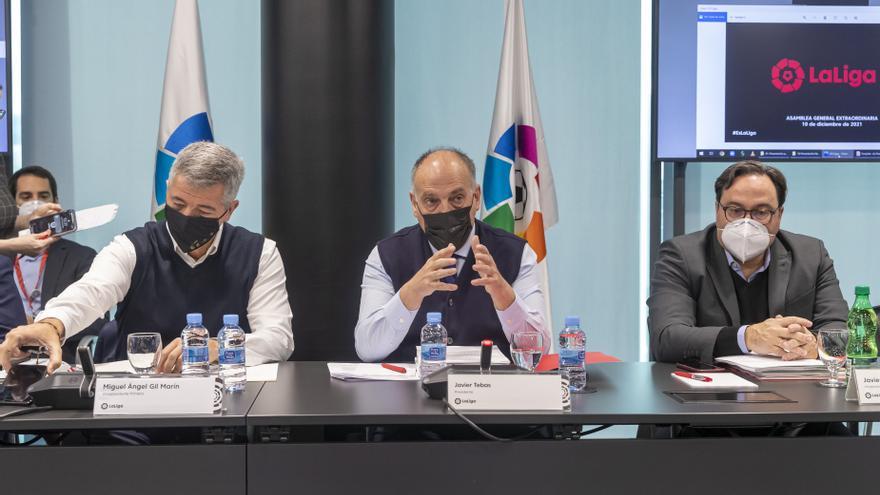 Javier Tebas He had prepared thoroughly for these last two weeks, key in the future of LaLiga for the next few years and also for his own future. Since in 2015 he managed to get the Government of Mariano Rajoy approve by law the centralized sale of rights audiovisuals of the competition, and apart from the pandemic, the Aragonese leader had not faced two revalidations of the current entity, held within four days, between Friday 10 and Monday 13.

On the one hand, the ratification of the agreement with CVC. On the other, the sale of audiovisual rights for the next five years. The two were completed with a great success rate for its promoter, the president of LaLiga.

Each one has its small nuances, but they do not cloud the victory (always partial, since the war never ends) of Thebes against its opponents, reinforced by the endorsement of Justice for its action in the Deportivo-Fuenlabrada Case, relative to the outbreak. of covid of the Madrilenians in the last day of Segunda in the summer of 2020.

“We are doing well”

“People think that small clubs support them for some kind of obscure reason or because they have us trapped down there. But the reality, in most cases, is much simpler: we support you because we are doing well with what it does. And the day we go wrong, we will withdraw our support. It’s that simple ”, they synthesize from the offices of a Second Division club.

This same Thursday, Tebas received another accolade, after the dismissal by the Justice of a lawsuit against LaLiga de 23 million euros by Real Madrid. The courts, yes, they have also served a defeat this December: the endorsement of the Provincial Court of Madrid to the action of the RFEF at the time of prevent Primera matches from being played outside of Spanish territory, in this specific case, in Miami.

The balance, in any case, is positive for Tebas, a leader who was always clear that in a democratic institution like LaLiga, in which the vote of the champion of First is worth the same as that of the newly promoted to Second, the strategy should be be next to the small clubs.

There are simply many more and he is still an employee, the highest ranking, of LaLiga, chosen by majority for all of them. And it also serves as a parapet for fans against complex decisions backed by the clubs, such as football on Mondays. The blows that should go to the clubs are received by him and it is something that he assumes and accepts as part of his job and his generous salary.

This line of work has always collided with the legitimate and logical wishes of Real Madrid and Barcelona, ​​which have seen their economic power in the national championship recede, even if it is little, as well as those of Athletic, whose particular philosophy loses strength the lesser it is. economic distance from your local competitors (Real Sociedad, Osasuna, Alavés…). Hence the war that is now being waged and that was made visible like never before with the agreement with CVC.

Carrying out the agreement with the investment fund was an obsession for him, convinced for years of the need for clubs to grow in infrastructure to be able to approach the now unattainable strength of the Premier League. Depending on who you ask, Thebes was either very nervous or not at all in the days leading up to the Assembly.

The truth is that that week the calls from the LaLiga headquarters to clubs throughout Spain multiplied to dissuade them from the temptation to join the counter offer in the form of credit that Real Madrid, Barcelona and Athletic raised. Finally, the block of 39 suffered the loss of Ibiza and the partial, in the form of abstention, of the Real Oviedo, but it is not an outcome that worries at the headquarters of the association.

In many clubs, the main concern was to know the horizon that could be drawn if, as has happened, Madrid, Barça and Athletic took the agreement before the courts and they decree in the future the suspension, precautionary or definitive, of the agreement with CVC . Thebes’ reaction was to cover their backs, agreeing with the investment fund a parallel loan of 400 million euros (the amount of the payment that will be made before the end of the year), which will only be activated if Justice knocks down the original project.

On a personal level, the ratification of the agreement with CVC is also important for Tebas, since it implies its continuity in LaLiga during, at least, the next seven years. Not necessarily as president, since that decision is in the hands of the clubs and his current mandate expires in 2024, but yes as an executive who ensures compliance with the agreement with the fund. There are clubs, in fact, that think that he will not be eligible for a new term when the current one ends.

And if the signing with CVC was important, the next chapter was even more so. Faced with all the negative forecasts, LaLiga managed on Monday to maintain identical levels of income in terms of audiovisual rights: 4,950 million euros for five seasons. Even a little higher, although it is true that this contest had the peculiarity that now the production expenses will be borne by the competition, which in practice will leave the net income slightly below the previous figure.

Thebes played his cards to raise the final price of the award or at least that is what many clubs think, most of them exulting with the result of the ‘tender’. For months, the leader was encouraging the possibility that Amazon prime enter with great force in the bid, something that nobody is clear if it happened or not and about which the company itself does not want to comment.

In addition, in recent days, from LaLiga an alleged offer of Relevent, your industrial partner in North America, from 5,000 million euros. Whether he entered the bid or not (in the sector it is suspected with apparent certainty that he did not even do so), the obvious thing is that Relevent did not put that amount on the table, as it would have been the winner. “Has gone bluffing and it has been good for him. We have done well, “they stand out in a First-class club.

The thorn in Thebes with this contest is that it has not managed to detach itself from the dependence on Telefónica and its strategy of marketing football through packages that include services such as fiber optics and fixed and mobile telephony and that, in practice, require a minimum investment in households 100 euros per month to be able to see LaLiga.

The ideal scenario for him and his team would have been that dazn or another OTT (such as Amazon itself) to keep all the packages, or even have a third party (Relevent?) to resell them to multiple platforms, but they assumed that this market still has to mature more in Spain to compete with a giant like Telefónica.

The way in which Telefónica (which is at the expense of the CNMC) and Dazn, co-winners of the competition for the next five years, agree on the way to share their rights will be key in Tebas’ desire to expand the number of LaLiga consumers in Spain . “In Spain there are 13 million users of OTTs that not even paying can watch football, “he lamented a few months ago in an interview in 2Playbook.

The agreement now maintained by both platforms includes an exchange of content, so that all of Dazn’s can be seen on Movistar and Formula 1 (owned by Telefónica) can also be seen on the OTT, without the need to contract more services with the operator Spanish. It seems difficult for that formula to be replicated with football, but it is still too early to predict how the negotiations will be resolved.

Orange, which now offers all the games thanks to an agreement with Telefónica, has already announced that it will open negotiations with both winners to broadcast the competition in the coming years. The other big conventional pay TV operator, Vodafone, does not seem interested in returning to the football business, which it abandoned a few years ago.

On the horizon, still distant, the project that LaLiga is capable of market your own rights Through its own OTT without the need for intermediaries to deal with distribution. For this, it has already existed for a few years LaLiga Sports TV, an online platform in which the club association broadcasts second-order competitions and minority sports matches. We will have to wait at least until 2027 for that to happen and who knows if by then Tebas will continue to lead LaLiga.