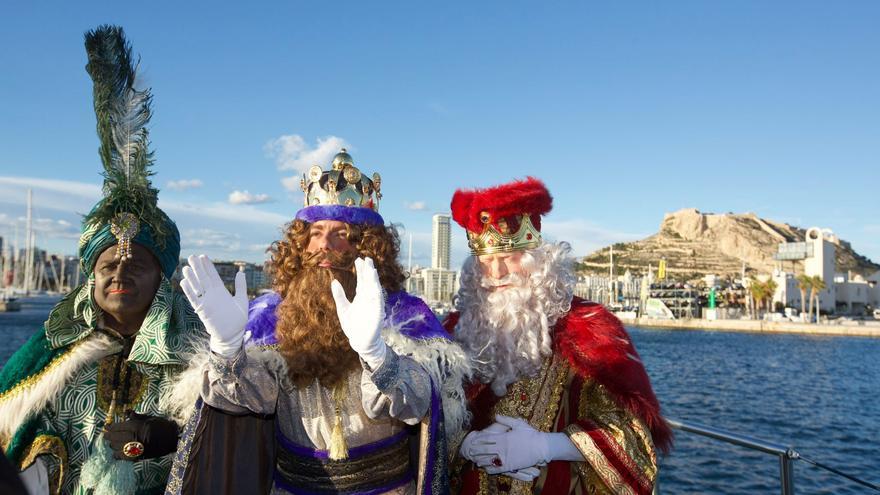 The long awaited day has arrived for thousands of little ones … and not so little ones. The Three Kings are already in the city of Alicante. Their Majesties have arrived with exquisite punctuality at the port of Alicante, aboard a Civil Guard patrol boat, which also included the main authorities of the city (such as the mayor and the deputy mayor), who did not hesitate to join in the greeting. .

After a ride on the boat along the dock to be seen by the boys and girls, they have landed on a jetty located in front of the Giant Nativity Scene, amid applause, chants and wishes thrown into the air. Although there could have been no direct contact, Melchor, Gaspar and Baltasar have received from the first moment of their arrival in Alicante the affection of dozens of children who have traveled to the surroundings of the Esplanade to be the first to receive the Three Wise Men, after the forced stoppage last year due to the covid pandemic.

Hence, Melchor, Gaspar and Baltasar, who tested negative in PCR tests this Tuesday to be able to enjoy today without a mask, have left in a caravan of six cars escorted by the Local Police to the bullring, where from first In the afternoon the show “La Estación de los Cuentos” is held with access only by invitation and with a limited capacity.

In the bullring, the Magi from the East will give the royal message, which was usually held at the City Hall and which this year it has been suspended to avoid crowds, as has happened with the Adoration and the subsequent reception in the Blue Room.

After passing through the bullring, their Majesties will head towards the head of the parade, which this year will start at 7 pm from Avenida de la Estación, where there will be seats for the public for the first time. The route, which is expected to be crowded, will end, also exceptionally, on the Rambla, to avoid crowds on Altamira street. Expect around 13 degrees and gusts of wind that do not exceed 20 kilometers per hour.

During the tour, there will be a lot of music, a lot of dancing and many of the little ones’ favorite characters. In total, a dozen musical and artistic groups will participate, including Nanos i Gegants and also a group of foguerers. On the other hand, boys and girls will be able to enjoy characters such as los Minions, Spiderman y Star Wars, along with luminous giants, among other attractions. The play train will be the prologue of the biblical train, which will have five representations (the star, Saint Joseph asking for shelter, the annunciation to the shepherds, the registration in the register and the birth of Jesus), in addition to the floats of the three Kings Magicians To finish, there will be eleven commercial floats.

On the occasion of the parade, the City Council has launched a device with a hundred policemen, who will have the support of fifty volunteers from Civil Protection and as many controllers from the company awarded the organization of the parade for control of the capacity in the chairs distributed by Avenida la Estación, Alfonso el Sabio and La Rambla. The Local Police of Alicante, according to the Alicante City Council, is in charge this Wednesday of regulating traffic cuts and coordinating access, as well as “ensuring that the measures for the use of masks that are mandatory and distances are respected”, and of monitoring and escort motorized the routes of the cavalcades and the arrival of the Magi.

Also Read  What life will be like when COVID becomes endemic, according to doctors

This Wednesday, January 5, on the occasion of the celebration of the official Cavalcade of the Three Wise Men of Alicante, traffic cuts will be made. As of 4:00 p.m., the official route from Plaza de Luceros has been closed to cars, Alfonso El Sabio avenue, Rambla de Méndez Núñez, Rafael Altamira street and Plaza del Ayuntamiento, and from 8 am parking was already prohibited in the itinerary. The entire route is fenced.

This Wednesday, the local Police will also monitor and coordinate the reception of the Three Wise Men, Living Nativity Scene and Chocolatada organized by the San Agustín Patronal Festivities Association, with a traffic cut to carry out the requested itinerary under the control and supervision of Ibi, Agustín Santonja streets and Tuberia, from 6:00 p.m. to 7:00 p.m., and the traffic cut and parking ban on Tubería Street, in the section between Ondara and La Nucía streets, from 5:00 p.m. to 12:00 p.m. 9:00 p.m.

By last, The Moors and Christians of San Blas have organized a Cavalcade from 7:00 p.m.. To allow the celebration of the event, the Local Police cuts traffic and prohibits parking on the streets of Presbítero Baltasar Carrasco, Poeta Garcilaso, Condes de Soto Ameno avenue, General Mancha square, Pintor Gisbert until Alcalá street.