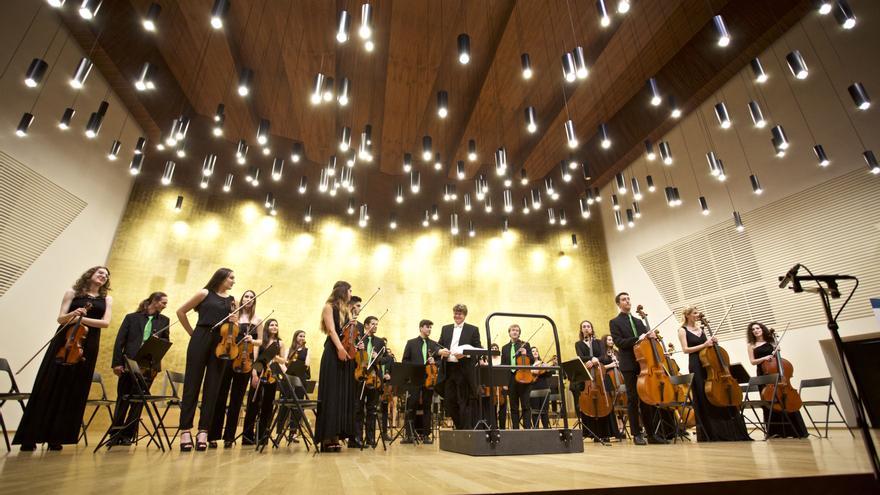 The University of Alicante and the Rotary Clubs of Alicante and Alicante Puerto organize, once again, their traditional Rotary-UA Christmas Concert, which will perform the Philharmonic Orchestra of the UA (OFUA) in ADDA the next Monday, December 21, at 20 hours. Under the direction of Tobias Gossmann, the concert, like the past editions, will have a solidarity character and the proceeds will go to the Network of Entities for the care of the homeless of Alicante (Acomar), with price / donation of 15 euros (already available in this link)

For those who cannot attend but wish to collaborate with this cause solidarity, has been enabled Zero Row. In addition to the specific sponsorship of Rotary clubs for this concert, OFUA has the support of its annual sponsors: the Manuel Peláez Foundation; Hidraqua, Vectalia and Cajamar Caja Rural.

As a novelty this year, University of Alicante will open the doors to the public to attend the OFUA General Rehearsal, on Sunday, December 20 at 12 noon, in the Auditorium. The attendance will be by invitation (available on Instanticket).

This General Rehearsal will offer the same repertoire as the ADDA concert, a more informal proposal on campus, aimed at teaching the university community and the general public how to work and how a university and training orchestra works from within.

During the months of confinement and restrictions of the pandemic, OFUA activity has not stopped, although for this Christmas production it has reduced the number of members due to limitations required by the current situation.

This year’s Rotary-UA Christmas Concert will include, as detailed by OFUA director Tobias Gossmann, two pieces: the Al-Laqant Suite and Schubert’s Symphony No. 5.

This concert includes in its program the world premiere of the “Suite Al-Laqant” by the German composer Marcel Noll. This musical work has been created by commission of the University of Alicante for the University Philharmonic Orchestra (OFUA) and is based on the music of the recently released ballet “El festí de les Bèsties” (Aula de Danza Contemporánea de la UA). Gossmann details that “the composer Marcel Noll tells us his own story and inspiration in this commission: A journey through the times of Alicante. In fact, the Suite could have been called Leukante, Lucentum, Medina Laqant, Alicante or Alacant, making reference and homage to the different eras and languages ​​of the city ”.

The concert program It is completed with the symphony no. 5, D 485 in Bb Major by Franz Schubert is one of the best known of the Austrian composer. Schubert created this symphony in 1816, at just 19 years old, at a decisive time in the composer’s life.

After leaving his job as a teacher’s assistant at his father’s school, he moved to the house of his friend Franz von Schober to dedicate himself exclusively to study and composition. The legacy of the first Viennese school and the influences of Mozart and Haydn are clearly recognizable in this symphony, both in form and content. Yet Schubert already expresses his own soul: his innovations, their beautiful melodies, sometimes so beautifully melancholic.

This year’s Rotary-UA Christmas Concert will include two pieces.

ACOMAR | Network of Entities for the Attention of the Homeless of Alicante (projectenred.org)

Salvador Silva Nuño, president of ACOMAR, explains that “in ACOMAR’s 31 years of life, we work daily alongside very, very poor people and we have never had the opportunity to share an event as beautiful and supportive as this one. We are one Poor, humble and simple association, with a volunteering young willing to stand up for these people in need who come to us from all over the world. We have few resources to attend to them. We serve an average of more than 100 people and families with minors daily. They not only have hungry physical, but also hunger to be loved. In these special moments that we are living, it is not time to turn our face to reality ”.

Tobias Gossmann was born in Siegen (Germany). He studied professionally at the University of Music and Performing Arts from Vienna, where he studied violin, piano and orchestral conducting. His professional career began as leader and concertmaster of the Viennese chamber orchestra. Maurice Ravel Ensemble. Later he held the position of associate concertmaster at the Symphony Orchestra of the Gran Teatro del Liceo from Barcelona for more than ten years.

The National Orchestra of Thailand lo invited to lead a gala evening in Bangkok to celebrate the Your Majesty’s 70th anniversary, Queen Sirikit of Thailand. In Japan he has directed the Super World Orchestra, with which he has traveled, between 2001 and 2007, most of the cities and halls of the country, and has participated in recordings and television productions for the “International Music Festival Tokyo”. In 2009 and 2013 he returned to Japan with the Camerata XXI Symphony Orchestra and in 2017 and 2019 with the International Orchestra of Italy. Between 2003 and 2016 he was Musical Director and Titular Director of the Camerata XXI Symphony Orchestra in Tarragona. In 2017 he was appointed Artistic Director and Head of the Philharmonic Orchestra of the University of Alicante.