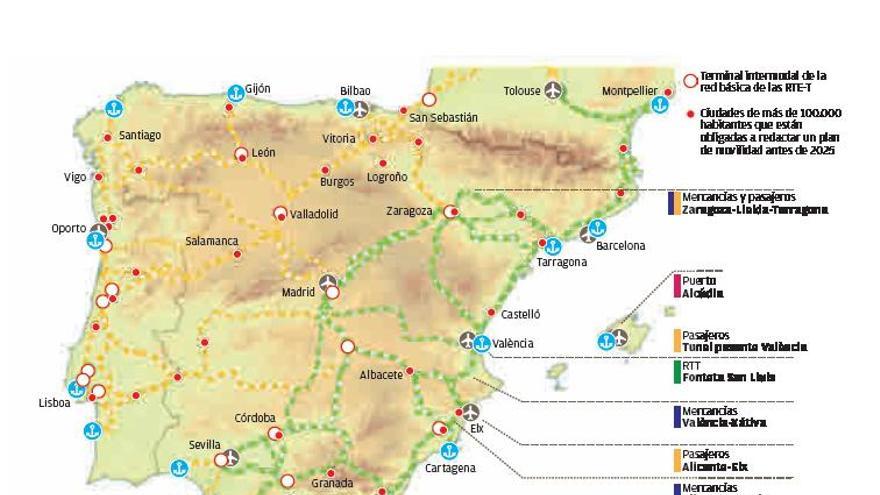 The European Commission has revised the regulation of the trans-European transport network (TEN-T), in which the Mediterranean axis, the Cantabrian-Mediterranean axis and the Atlantic corridor are included as priority corridors.

The regulation of the trans-European transport networks (TEN-T) has also made it possible to rise to the first division of the European priorities sections until now not included as the Xàtiva-València conventional railway route (the high-speed line between both cities, already built but not yet operational), the railway connection with Alicante airport (currently a single track without electrification) or the Iberian gauge railway line between the Encina junction and Alicante for freight.

The revision of the TEN-T also means the appearance for the first time of the València through tunnel [proyecto con el estudio informativo en información pública] and the multimodal station of the Font de Sant Lluís.

«The Valencia node is very well drawn: it includes as a basic European network the port, the city, the Font de Sant Lluís and the through tunnel, which means that they will be able to access European aid, such as the basic network of the trans-European transport networks », Points out Josep Vicent Boira, coordinator of the Government office for the Mediterranean corridor.

Access to European funding aid is, in fact, the main advantage for an infrastructure that becomes part of the basic network of the trans-European transport network (the TEN-T core network) .

Among the European financing that can be accessed is that regulated by the financing regulation 2021-2027 of the trans-European transport networks endowed with 25,800 million until 2027 (of which 12,000 are destined for cohesion funds that the Government no longer receives from Spain).

«You have to wake up and get your batteries started to know what can be financed with these grants because there are interesting options for Valencia such as changing the Castelló-Tarragona gauge (from Iberian to European) and the connection with Alicante airport so that the corridor Mediterranean is a reality.

Accelerating projects is the responsibility of each Member State, according to Boira recalls. Although the cities must also put the batteries. «The cities are going to have a more notable importance. That is why cities such as Valencia and Alicante should incorporate a broad-scale vision of where they are in the trans-European transport network in order to know the requirements and advantages of being in this network ”.

Among the requirements that Europe will demand for cities with more than 100,000 inhabitants included in the trans-European transport network will be the requirement of having a metropolitan mobility plan (Pmome) before 2025. There are 424 cities in the entire trans-European transport network. In the Valencian Community, the three provincial capitals and their metropolitan areas must have an approved mobility plan.

Routes on foot and by bike

The European guidelines are clear: public transport and journeys on foot and by bicycle must be promoted in large European cities and metropolitan areas to reduce car use.

With regard to public transport, Europe is committed to the railway, so that it is as versatile as the plane. For this reason, the VAT on transnational railway tickets will be reduced, among other measures. The European Commission aspires to create a “smart and sustainable network based on basic measures that the entire European network must comply with: speeds of 160 km / h or more, interoperable European security system ERTMS, freight lines suitable for 750-meter trains. and to adapt the terminals to the railroad truck transshipment to put the trucks on the train ».

The train connection with the airport may receive EU funding