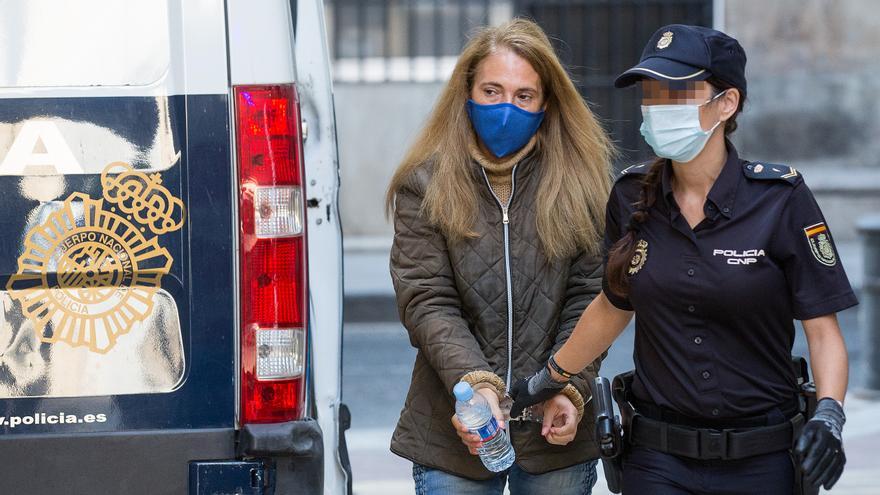 The Superior Court of Justice of the Community (TSJ) he has aggravated the sentences for the black widow of Alicante and her caretaker for him murder of husband of the first two weeks after the wedding, according to the sentence to which this newspaper has had access. The Civil and Criminal Chamber of the Supreme Court Raises the penalty for Conchi Martín in one year and Francisco Pérez in two and a half years when upholding the appeal of the private prosecution that requested that a disguise aggravating, that is, the accused altered their clothing to guarantee impunity. After this new ruling, The penalty is 23 years and six months in jail for Conchi and 22 years and six months for Paco. The sentence is not final and against it there is the possibility of a new appeal before the Supreme Court.

The victim, Jose Luis S. G., he died stabbed the night of August 22, 2018 in a Albufereta outdoor car park, in which the defendants had summoned him on the pretext of a romantic dinner. José Luis and Conchi had been married just two weeks before in Sax. Both were caught red-handed by an off-duty police officer who was walking with a friend in the area at the time. A popular jury found them guilty of the murder and the Court handed down a sentence in application of the verdict. The sentence was appealed to the Supreme Court both by the defenses, who insisted on the innocence of the accused, and by the private accusation, which is exercised by the lawyer Aitor Prieto on behalf of one of the children of the deceased and which demanded harsher penalties. Only the Prosecutor’s Office claimed that the sentence remain as it was.

The ruling condemned them for a crime of murder with the aggravations of treachery, cruelty and, in the case of Conchi, of kinship. The lawyer for the private prosecution stated that there were two other aggravations that the sentence did not apply: one, that of having taken advantage of the fact that the area was a lonely place, which has been rejected; and another of disguise, because the accused altered their appearance to avoid being recognized, the latter has been estimated.

The court ruling considered it proven that the two defendants had warned the victim that at the supposed romantic dinner they would be dressed in dark clothes, so that he would not be scared when he saw them. The popular jury considered it creditable that the two defendants attended the meeting “dressed in dark garments and headdresses in order to hide their facial features and disguise their usual appearance to facilitate the execution of their project.”

The ruling includes several sentences in which the criterion is established that in order to apply this aggravation it is sufficient “when in the abstract, the means used is objectively valid to prevent identification.” The judgment of the Hearing indicated that it was habitual the use of caps and of dark garments in the clothing, to reject the application of the aggravating factor. Some reasoning that the Supreme Court rules out, when assessing that said clothing constituted “A clever means of making identification difficult.”

Use of the place

On the other hand, the Supreme Court does not consider proven that the fact that the defendants took advantage of the circumstances of place and time to commit the murder is valued as an independent aggravation, it is decir, they summoned him in a secluded area with little traffic of people to guarantee impunity for the crime, according to the approach of the private prosecution. Some arguments that the court has rejected when considering that in this case those circumstances were already absorbed by the treachery, that is, the means used by the accused to prevent the victim from being able to protect himself. «The difference is not so clear when the treachery has consisted of stalking by attracting the victim to a certain place, because it seems clear that the choice of the pre-ordered location for the crime will fall on a suitable place where it is difficult to receive help and the probability of impunity is greater, alluding to the fact that a part of the betrayal consists in taking the victim to the place where they will be left defenseless.

The view was followed by videoconference from the Villena prison by the two defendants, who had a turn to last word. A technical error prevented them from being able to intervene in this phase of the trial and the court offered them the possibility to present their allegations in writing. Finally, they have not sent anything to the court, according to the ruling.