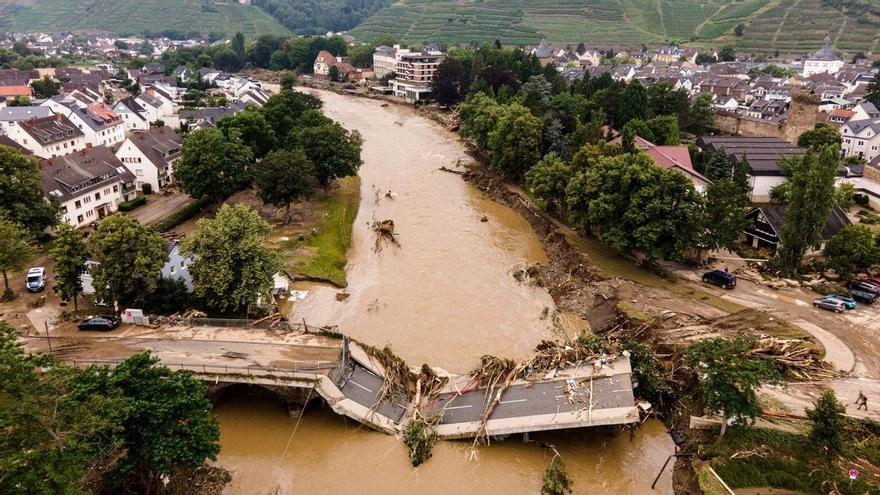 On the eve of the start of the Glasgow Climate Summit (COP26), a study by the Euro-Mediterranean Center on Climate Change describes how the progress of the climate crisis will affect the G20 countries; the richest in the world and those responsible for up to 75% of greenhouse gas emissions. As this analysis concludes, Europe could be exposed to extreme heat, an increase in the level of evil and great economic losses.

If the global rise in temperatures can be curbed, predictions suggest that the gross domestic product of Europe it will fall less than 1.5% in 2050 and 1.8% in 2100.

More losses than in the pandemic

In a world of climatic extremes, Europe could lose more than 2% of its GDP in 2050 and more than 5% by the end of the century. It is estimated that those most affected by these losses will be the southern countries, including Spain, where global warming is expected to become extreme and put all economic sectors in check. Of particular concern is the impact of extreme heat in the primary sector, such as agriculture, livestock and fishing.

In all G20 countries, an extreme climate crisis could cause annual losses of almost 5% of GDP in 2050 and higher than 8% by 2100; with twice as many losses as those caused by the pandemic of covid-19. It is estimated that the United States, India, Japan, South Africa and Canada will stand out as the most affected countries, with losses of between 10 and 13% of GDP.

Rising temperatures will aggravate droughts and put in agricultural production risk in all Europe. If the world manages to limit global warming, the risk of droughts will be limited to an 8% increase over current values.

More than seven million Europeans could be exposed to “a severe water shortage“If the planet exceeds 3 degrees of global warming. The lack of water resources could cause, in turn, losses of almost € 100 billion in the coming decades. It is also estimated that the increase in extreme heat will bring a 14% increase in the frequency of hydrological droughts and a 66% increase in agricultural droughts.

Meanwhile, everything indicates that by 2050 the water demand for farming will increase by 40% in the south of Europe. This scarcity of resources could jeopardize key crops for the continent. In Spain, for example, it is expected that the yield of maize crops in a large part of the Peninsula could plummet. In the south of the country, wheat production would also be seriously threatened by the climate crisis.

In the best case, in 2050 the average annual temperature in Europe will ‘only’ be 1.6 degrees above of the reference values ​​of the last decades. This will imply that both the highs and the lows will rise by about two degrees on average.

Deadliest and most extreme heat waves

Extreme global warming would raise the temperature by four to seven degrees in Europe before the end of the century. By 2050, the annual average temperature could add 2.5 degrees relative to current values. The maximums and minimums would also suffer increases of around three degrees, with winters less and less cold and increasingly scorching summers. Mediterranean countries, including Spain, will stand out as those most affected by extreme heat. There is also concern about the impact of high temperatures in urban environments, where ‘heat islands’ increase the phenomenon.

In a world of climatic extremes, the heat waves could be 84% more frequent and last an average of 1,247% longer than now. In Europe alone, deaths from extreme heat could total between 30,000 and 50,000 deaths annually by 2050 and beyond. 90,000 deaths a year before the end of the century. Deaths from extreme heat in the year 2100 could be equivalent to the total balance of the last two decades.

The intensity and frequency of extreme weather events it has already intensified over the last century. If the increase in temperatures remains below 1.5 degrees, everything indicates that these events will not vary much compared to what we have now.

In a world of climatic extremes there could be up to three times more storms, storms and extreme floods. Starting in 2050, it is estimated that extreme weather events that previously occurred once every 100 years will begin to occur every 30 years and will increase in frequency as the century progresses. Everything points to the Central European countries (like Austria, Hungary and Slovakia) would be the most affected by extreme storms. In the Mediterranean there is concern that torrential rains will extend beyond the usual seasons.

Projections suggest that, if the climate crisis progresses towards the worst-case scenario, in 2050 Germany will go from 28,000 to 150,000 affected annually by floods and extreme storms; France will raise its balance from 25,000 to 144,000 and Italy from 17,000 to 100,000. The impact of extreme weather events could increase by the end of the century.

Damage to the coast

If in the coming decades the advance of the climate crisis is halted, sea ​​level in Europe will have ‘only’ risen an average of 18 centimeters by 2050 and 38 centimeters for 2100. In the long term, this increase will cause damage in the areas most exposed to the sea.

Erosion of 10 meters per year

If the climate crisis is extreme, the sea level could rise up to one meter by the end of the century, thus increasing the risk of flooding in the coastal areas of Europe. The sea temperature could rise one degree in the Atlantic and up to three in the Mediterranean. Mediterranean coasts could suffer a erosion of up to 10 meters per year. By 2050, Europe could have lost up to 25 meters of sand and beaches. By then, coastal infrastructure could suffer annual damages of 776,000 million euros.

Meanwhile, in the waters, a decrease is also expected in the oxygen levels of the water (a key factor for life in seas and oceans) and a decrease in chlorophyll thresholds (which stand out as an indicator of the well-being of marine ecosystems. ). All of these factors could cause a drastic reduction in fishing. In fact, potential fish catches are estimated to decline by at least a quarter by 2050.

Fires on the rise

The Mediterranean fires have been on the rise for at least two decades. Spain, Italy, Portugal and Greece account for 90% of the burned area. If global warming can be limited, fire risk will ‘only’ increase by 5%.

If Europe is exposed to extreme heat and prolonged droughts, fire risk could skyrocket by more than 10% in the coming decades. The area burned in forest fires each year could increase by 1,659 square kilometers per year between now and 2050, the equivalent to burning the entire city of London every year. Large fires could spread across southern and eastern European countries, from Spain to the Balkans and Poland.

It is estimated that around 2070, the fire season will have already been lengthened by at least 10%. The rise of European fires will also bring an increase in greenhouse gases, which will further fuel the vicious cycle of global warming. In 2050 we could have up to 18% more suspended particles generated by fires and 15% of global carbon emissions.