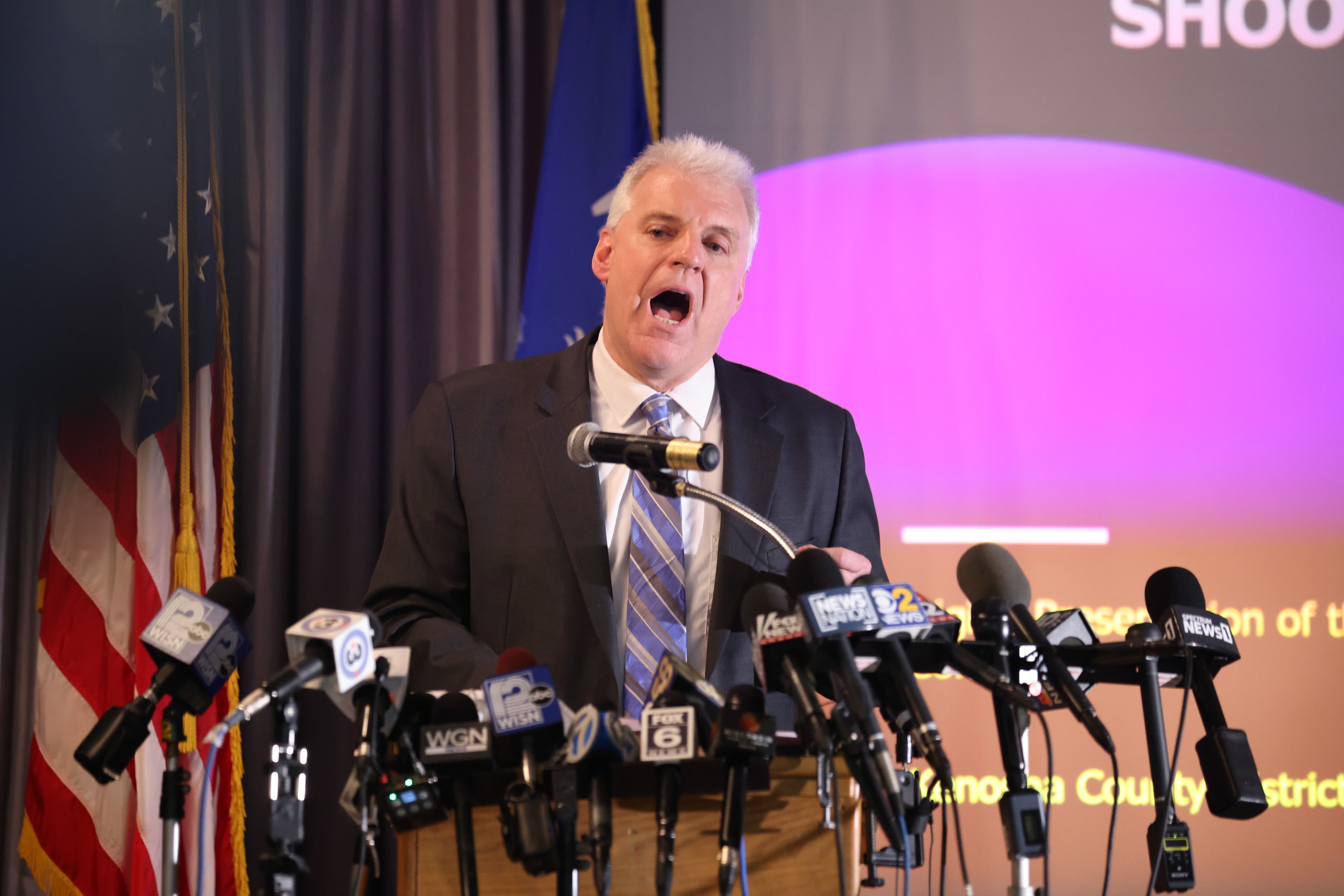 The plywood planks, which protect businesses in case the protests get out of hand, will be another symbol of this historic 2020 in the United States. The boards against looting, the masks against the coronavirus. The faces and windows covered in interchangeable streets of Minneapolis, Seattle, Des Moines, Houston, Louisville, Memphis, New York, Los Angeles, Portland, and now Kenosha. A city of 100,000 inhabitants in southeastern Wisconsin, on the edge of Lake Michigan, where last Sunday a white police officer fired seven bullets in the back at African-American Jacob Blake, leaving him prostrate in a hospital bed.

The event reignited the flame of protests for racial justice that have swept the country since, on May 25 in Minneapolis, 600 kilometers from Kenosha, another white policeman killed another African-American, George Floyd, drowning him with his knee in her neck as the victim told her she couldn’t breathe. The pattern repeats. People, furious, come out to protest peacefully. At night, a minority of violent people wreak havoc in the city. Graffiti, burning cars, looting and, the next morning, planks.

“I’m leaving, I’m going to a relative’s house,” explains Lynette, a worker in a plastics factory, whose house on 10th Street is surrounded by a dilapidated lot, a burned-out car dealership and a looted bank office. Your dog is already waiting in the car. “It will take me 40 minutes each day to go to work, but I can’t stay. It has been terrible. I just smelled the smoke and heard the explosions. We were without electricity from one in the morning until two thirty in the afternoon. I live alone and I couldn’t sleep all night. I thought they were going to burn down my house. What that cop did is horrible. But this is even worse. This has to stop. Everyone talks about our situation, they use us as a political weapon and all we want is for them to let us live in peace ”.

That’s a lot to ask 67 days into an election that both parties refer to as the most important in recent US history. “Your vote will decide whether we protect law-abiding Americans or unleash violent anarchists, agitators, and criminals who threaten our citizens,” said Donald Trump on Thursday, on the White House lawn, accepting the Republican Party nomination to officially fight for a second term on November 3. “These elections will decide if we defend the American way of life, or if we allow a radical movement to completely dismantle it and destroy it.”

Republicans, eager to divert attention from the management of a pandemic that continues to hit the country hard, have launched their campaign as a crusade for “law and order.” Democrats speak of these elections as “a battle for the soul of the nation.” And that soul was “pierced”, in the words of candidate Joe Biden, by the shots of that policeman. Two competing visions of the country and, caught between one and the other, Kenosha has placed herself at the very center of the national political battle.

It also happens that the way in which Kenosha residents decide to vote may not be negligible in the November elections. In 2016, Trump was the first Republican to win in this county in 44 years. And that contributed to the current president taking Wisconsin with a difference of just 23,000 votes over the Democrat Hillary Clinton, who did not even campaign in the state. Wisconsin, one of those swing states in which either party can win, was key to Trump’s victory. And four years later, the importance of a city like Kenosha is not lost on any political strategist. Biden himself, who unlike his rival said that he would not hold face-to-face meetings to avoid generating potential sources of contagion of the coronavirus, in recent days has left the door open to travel in person to some undecided states, including Wisconsin.

“I was praying that an event like this would bring people together, but I’m honestly afraid it’s going to divide us even more. And that in Wisconsin we are already divided from the start. It is clear to me that I value life more than property. But my friends and my family do not think like me, and in recent weeks the issue has been much more present, ”says Christina Oldani, a 44-year-old teacher. Around him, however, there is unity. Perhaps one could even speak of communion. A priest asks the congregation over the microphone to raise their arms together under the inclement sun. A young man wearing a shirt that says “socialist alternative” talks to another whose shirt says “Jesus.”

A mysterious Texan in a wide-brimmed hat tries to explain to three African Americans that the 50-square-meter American flag he is trying to place on the grass, with the red bars painted black and the legend “there is no black on our flag,” is not offensive but quite the opposite. A Portland collective cook called Riot Ribs cooks meat on a barbecue to give away for free to anyone. And on the floor of the square, the word “love” painted with color hippy.

This is the park of the Civic Center. Since last Sunday, it has become the epicenter of peaceful protests every day at four in the afternoon. “We need to find a way that the protests do not end up out of control, because the riots only benefit Trump,” says Isaac Wallner, a Kenosha neighbor, truck driver and veteran activist for racial justice. “The chaos we saw at the beginning of the week definitely doesn’t help, because it fits into Trump’s narrative that what we need is law and order.”

Heading into the final stretch of the campaign, nuances disappear, and Democrats find it more difficult to explain that they support the cause but condemn the violent component of the protests. Trump’s populism, on the other hand, moves wonderfully in untouched territory. The president is very clear to whom his simple message of “law and order” is addressing. Not to its bases, which it already has mobilized, but to those moderate voters who escape it. Those who reject Trump’s ways, but who realize that the cities and states where protests get out of control tend to be in Democratic hands.

The problem is that there are nuances. One, and very big, is that all this is happening under his mandate. “Trump says this is Joe Biden’s America. But wait, Trump: aren’t you the president now? This is your United States. Nobody has a crystal ball to know what it will be like with Biden, “says Tyler Stecen, a 25-year-old resident of the city.

Another no less important nuance is that the only two fatalities in Kenosha, so far, were killed by the shooting of a self-erected vigilante. A 17-year-old boy who wanted to enforce law and order on his own with an assault rifle and who was also an enthusiastic follower of the White House tenant. “Supporting Trump does not necessarily make him a bad person, but a dog is a dog and a cat is a cat,” defends Alex Simon, 22, who wears an anti-Trump T-shirt. “What is clear is that there are two different justices. On the one hand, a black man who did not have a gun in his hand was shot by a policeman not one, but seven shots in the back, with his children in front of him. If it hadn’t been for the citizens who recorded it, who knows what story they would have told us. On the other hand, you have a white boy walking down the street with an assault rifle in the middle of the protests, and the police are friendly with him. That is why we must remain active, to be heard. Police violence is political, of course it is. Everyone suffers from police violence, but we blacks are dramatically more brutalized. I wish violence was unnecessary, but sometimes it takes a little bit. It is bad that businesses are vandalized, but sometimes it is necessary to destroy. This will pass, but history shows that no revolution has come with a peaceful protest. Sometimes we forget that changes only come when we burn down the streets ”.

At seven o’clock on Friday afternoon, the curfew alert sounds on mobile phones, but there are hardly any people left in the park of the Civic Center. The uniforms of the National Guard agents, sent by Trump, are camouflaged against the skeleton of a dinosaur in the garden of the museum of paleontology. In another corner, exhausted, a rapper preacher who was rhyming loudly for the salvation of all has left the microphone and has put on a honeyed Christian pop song. The wax from the candles spills over the word love on the plaza floor. The skaters They take advantage of the closed streets to practice their tricks. An elderly man without a shirt and with a banner against the police complains because let’s see where the fuss is, “it’s the weekend.” And Eduard, with a mass of white hair over his black face and a T-shirt that says “old number one”, goes out to take a cigarette on the front stairs of his house.

He did not leave, unlike his neighbor on the street. He did not sleep either, he says, but it could have been worse. “I have a friend who lost her business, and I really feel sorry for her because I know how hard she worked to get it done,” she explains. “Violence clouds the message, because now the focus is not on the household items but on the reaction. But those who cause violence and destruction are a minority. When the fire goes out, the message must follow. When the smoke clears, I hope the protest continues. Because this president has fueled the racist discourse. You can be part of the solution or part of the problem, and he is part of the problem. I am 73 years old. I’ve seen good presidents, and not so good presidents. With each of them we have had some tragedy, be it a war or something else. We cannot judge a man’s heart, we cannot see what is inside. We can only see what comes out of his mouth. Every president for as long as I can remember has used words to try to bring people together. Trump is the first in my life to use rhetoric to separate people. “

Subscribe here to newsletter weekly on the elections in the United States.