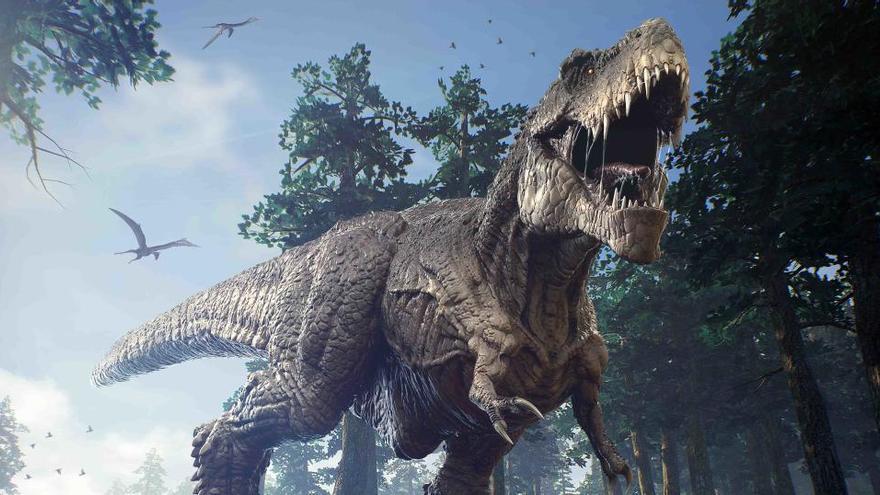 A cut analysis of dinosaur bones has revealed that The iconic Tyrannosaurus Rex was suddenly growing up as a teenager, while other species did it progressively during their life.

The T. Rex was one of the largest carnivorous dinosaurs of all time, which measured up to 13 meters long from snout to tail and weighed more than 7,000 kilos. Scientists have previously shown that he experienced a big growth spurt in adolescence, but they didn’t know if that was true only for tyrannosaurs, only for themselves and their close relatives, or perhaps for all large bipedal dinosaurs.

The study of the growth lines of their bones -published in the journal ‘Proceedings of the Royal Society B’- has shown that Both T. Rex and its closest relatives had an awkward adolescence during which they grew huge, while their more distant cousins ​​in the allosauroid group continued to grow a little each year.

“We wanted to look at a broad swath of different theropods, two-legged carnivorous dinosaurs, to understand broader patterns of growth and evolution in the group,” explains Tom Cullen, lead author of the new study.

Cullen, an affiliate scientist at the Field Museum in Chicago who worked on the study as a postdoctoral researcher at the Field with the museum’s then dinosaur curator, Pete Makovicky, explains that, “in particular, we wanted to understand how some of them got so big. “.

Makovicky, Field’s affiliate scientist and professor of geology at the University of Minnesota and lead author of the paper, notes: “We also wanted to see if we got the same growth record when we sampled a variety of different bones from the same skeleton.. All these questions about how theropods grew could affect our understanding of the evolution of the group, “he adds.

The researcher developed the idea for the project and also discovered several of the dinosaurs whose fossils were analyzed in the study.

The question of how an animal grows is surprisingly complicated. Mammals tend to go through an extreme growth period when we are young and then remain the same size once they reach adulthood, but in other groups of animals, that is not always the case.

“The rate of growth really varies, there is no one size fits all,” explains Cullen, now a postdoctoral researcher at the North Carolina Museum of Natural Sciences. Birds have a great accelerated growth and reach adult size very quicklyWhile reptiles such as alligators and various lizards and snakes have long growth. With them, a really big guy is probably very old. ”

Theropod dinosaurs like T. Rex are related to both modern birds and reptiles, in fact, birds are the only living theropods. Scientists didn’t know if theropod growth patterns were more like those of birds or reptiles, and those different growth patterns can make a big difference in how an animal fits into its ecosystem.

Getting big quickly can be a competitive advantage: it makes it easier for you to hunt other animals and more difficult for other animals to hunt you. But on the other hand, accelerated growth requires a lot of energy and resources, and it’s easier to grow a little each year throughout your life.

“Inside the bones as an animal grows, there are marks like tree rings that roughly record the age of the animal, how much it grows each year and a host of other factors. “To find these growth rings, he and his colleagues cut fossils of dozens of dinosaurs, from those the size of dogs and ostriches to T. rex.

“The first specimen the Field Museum let me study was the T. Rex,” Cullen recalls. “It was quite stressful, since it is such a famous fossil.” He used a diamond-tipped drill bit to remove a small cylinder from the femur. Back in the lab, he cut bone samples so thin that light could pass through them and examined them under a microscope.

“Most animals have a period each year in which they stop growing, traditionally suggested in times like winter when food is scarce. It appears in the bones as a line, like the ring of a tree, “explains Cullen.. By analyzing these growth lines and examining the bones for new growth regions, scientists can get a rough estimate of an animal’s age and how much it grew each year. There are also clues in bone structure.

You can see all the small areas where the bone cells have grown and the structure of the blood vessels that passed through the bone, Cullen says. “These vascular channels tell you roughly how fast the bone was growing. If the channels are more organized, the bone deposits more slowly, and if the structure is chaotic, it grows faster.”

Cullen discovered that the growth patterns of dinosaurs depended on their family. The T. rex and its relatives, the coelurosaurs, showed an extreme growth period during adolescence, then stopped once they reached adulthood. The T. Rex lived to be 33 years old, the oldest T. rex known today, but reached adult size in its 20s.

To reach this massive size, you probably gained 15-20 kilos per week as a teenager. Their more distant cousins, the allosauroids, could reach sizes almost as large as T. rex, but they grew slowly throughout their lives, with the oldest individuals reaching the largest sizes.

The discovery raises questions about how these predatory dinosaurs interacted with the animals around them. The herbivorous dinosaurs that lived alongside T. rex were ceratopsians such as triceratops and duck-billed hadrosaurs. They also grew extremely fast in adolescence.

Slow-growing allosauroid carnivores lived with large, long-necked sauropods that also grew rapidly, but appear to have taken a long time to reach full size. Those trends may be related.

“We can’t say for sure, but there could be some sort of selection pressure for the coelurosaurs to grow rapidly to keep up with their prey, or for the allosauroids to continue to grow in size, since their prey were also increasing in size – Cullen suggests, “But it’s pretty speculative.” It could be that even if sauropods continued to grow throughout their lives, they had so many young that there was always something small to eat.“.

But while the research hasn’t answered all the questions about why dinosaurs like T. rex grew up the way they did, Cullen notes: “I am very proud of this work. It is the culmination of many, many years of childhood. projects that are based on a kind of central objective of trying to understand the growth of these animals and understand the many factors that influence these patterns. This does not solve it, but it is a big step forward. ”