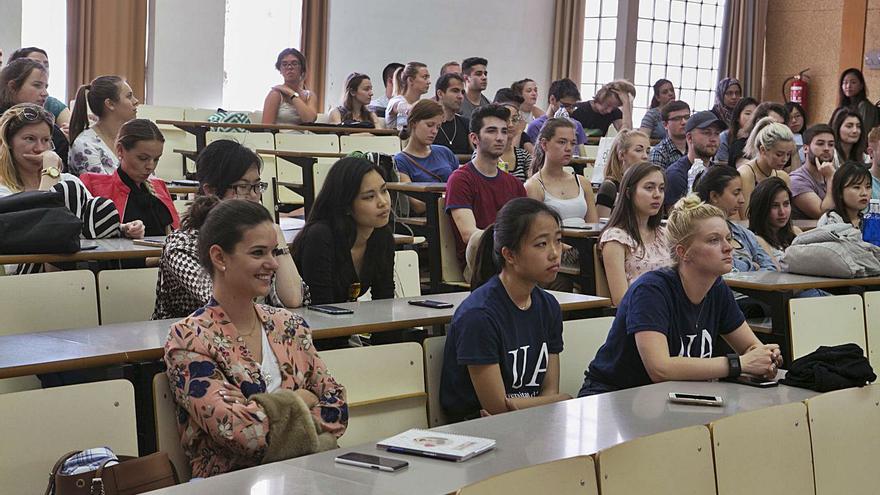 The volume of degrees implanted abroad and internships in other countries, place the University of Alicante above the Spanish average in its international opening, among the rest of higher education centers.

In the same way, in volume of tranches for research, spin off or business initiatives promoted from the campus, external funds for research or publications cited by patents, it is the Miguel Hernández de Elche University that exceeds the national average, at the level of the Carlos III of Madrid or Lleida and below the autonomous ones of Barcelona and Madrid, the Polytechnic of Valencia, and those of Compostela, Vigo, Granada, Girona, Cantabria, Valencia and Barcelona.

Erasmus reception at the University of Alicante, in file image. | RAFA ARJONES

The internationalization of the UA places it among the ten best centers in all of Spain in a parameter of which it does not present any negative percentage. Publications, thesis, teaching staff abroad and student mobility show intermediate value indexes in the Alicante center that are only surpassed by the autonomous ones of Barcelona and Madrid, the Carlos III and the universities of Navarra, Deusto, the Basque Country, Ramón Llull and Barcelona . The University of Lleida also obtains results similar to the international character of the Alicante campus.

Prepared from the data provided by the centers with respect to the year 2019, the latest report on the performance of the universities made public yesterday by the CRUE, Conference of Rectors of Spanish Universities, and the CYD Foundation of Banco Santander, emphasizes with regard to the future of higher education, both in the competition between centers to attract the best students -whether they are from their own country and foreigners-, as well as in the urgent need to obtain adequate financing in view of the «progressive reduction of public funding », As the authors specify.

The CRUPV itself or conference of regional rectors, chaired by the rector of the UMH, Juan José Ruiz Martínez, warned after his last meeting about the need for the Consell to address once and for all the financing plan that has not been executed , and that the universities yearn to be able to receive funds for objectives as highlighted in turn by the elected rector of Alicante, Amparo Navarro, in the exposition of her government program during the electoral campaign.

Among the 37 indicators that the annual report values ​​for all Spanish universities -academic, scientific and of external prestige-, the centers of the province stand out above the Spanish average in 7 of them the UA and in 9 the UMH.

To those already mentioned about its international character, the Alicante center adds the academic results of its graduates, with good graduation rates, as well as performance and graduation rates in the master’s degrees. It also has better rates than the average of universities in terms of income obtained from licenses and in the volume of research sections, although at this point in particular it is surpassed by neighboring Miguel Hernández, as shown in the graphs of the report that show by means of small green, yellow and red traffic lights the status of each center in each of the parameters analyzed together.

Those that in turn shine green for the University of Elche, and for which it stands out above the average are, together with those referred to in research, the graduation rates in the masters it teaches, the publications per professor and the publications with companies, in addition to post-doctorates and license income; while in publications that require work between several disciplines or interdisciplinary, it presents a value in red.

To regional development or the closest environment, which is another aspect that is measured in the global assessment of the universities, the Miguel Hernández contributes more than that of Alicante without any of them getting rid of the red lantern in what refers to performance, which in this case is measured based on the practices of students in companies in the province.

In the European context, the best results of Spanish universities, including Alicante, in terms of international orientation, highlights the indicator on student mobility in very good performing groups, with results that improve by 49% over the rest of European centers, according to data quantified by the authors in the report of the national campuses in comparison with other studies of European range.

The alert about the results is, however, in parameters of the degrees taught in other languages, an item in which Spanish universities are below European universities in general. In fact, from the UA in particular, there has been an emphasis year after year on the progressive increase in courses that can be taught in English.

The report emphasizes that in the long term, with a stagnant population, “the competition to recruit students is going to be increasingly high. Attracting the international student could be, in this context, an alternative ”. And the UA, according to its comparative results, is not on the wrong track.

Regarding the research level on which the Miguel Hernández University stands out, the authors of the CYD report emphasize that it competes at the national level with other countries whose scientific results, in terms of number of publications, “are growing at a higher rate”, although researchers linked to the university are 45.8% of the total in Spain and 36.5% in all these academic institutions in the European Union.