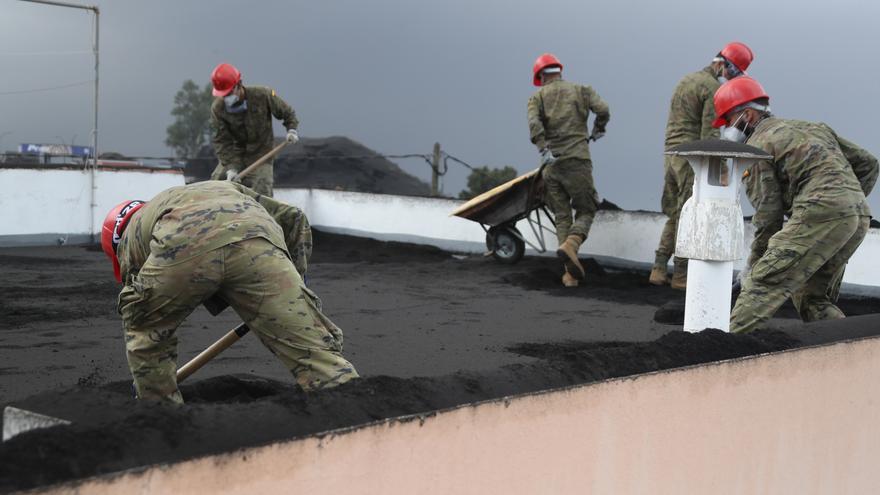 The emergency commander of the Military Emergency Unit (UME), José Alberto Gallego, has indicated this Thursday that the estimate of the end of the eruption in the La Palma volcano is “that it will not last more than a month, although the forecast is changing daily “.

Gallego has transferred to the Minister of Defense, Margarita Robles, that the volcano is in “downward trend” on a visit to the UME Headquarters to receive updated information on the operations that the Unit is carrying out on the island.

During this visit, the Defense Minister pointed out that this “type of mission” requires Psychological Support for the population and for the displaced contingent, while congratulating the UME for the work done.

Currently in this operation it has a total of 237 soldiers, 186 from the UME and 51 belonging to the Land Army, with a total of 77 media, including NBQR reconnaissance vehicles, drones and small loaders.

The Government will increase the material means necessary to detect toxic gases caused by the eruption of the La Palma volcano as it is one of the main concerns that is sometimes even conditioning the work of the Army and other emergency services.

To do this, the Council of Ministers plans to approve, predictably at its meeting this Friday, a game to provide equipment for detecting these gases to the troops deployed on La Palma, as announced by Robles.

The Chief of Staff of the UME, Pedro Aneiros, and the Chief Lieutenant General of the Unit, Luis Manuel Martínez Meijide, have explained to the minister that 232 soldiers are deployed in La Palma for the operation due to the eruption of the volcano, of them 183 from the UME and 49 from the Army, which have 76 vehicles, with weekly relays.

For his part, Lieutenant Colonel Chief of the Second Battalion of the UME, José Alberto Gallego, coordinator of the deployment, has highlighted by videoconference from La Palma that after almost three months of eruption the Cumbre Vieja volcano is already the most devastating on the island and will shortly be the longest.

It has reported that the volcano, currently with two active mouths in the main cone, has already affected an area of 1,184 hectares and 3,039 buildings, the lava has taken another 48 to the sea and the widths of the streams exceed 3,000 meters.

But it has warned of an “invisible enemy that are gases”, since sometimes they are detected high levels of sulfur dioxide and carbon dioxide which at times condition work such as the removal of ash from the roofs to prevent the buildings from collapsing due to the weight.

The National Geographic Institute (IGN) It has located five earthquakes on La Palma since midnight this Thursday until 08.27 hours, the largest being 2.9 in Fuencaliente, at 05.03 hours and 14 kilometers deep.

According to the latest report from the Department of Homeland Security (DSN), seismicity maintains low values ​​in the intermediate range, while the number of earthquakes at depths greater than 20 kilometers remains at very low values ​​and the tremor level is at low values ​​with little variability.

Likewise, the cracks and fractures observed in recent days in the top of secondary cone sThey remain unchanged or with significant modifications, while the lava flows mainly through the central sector of the flows through pre-existing lava tubes, which are gaining ground in a south and west direction.

Finally, as regards air quality levels by sulfur dioxide (SO2) This Wednesday they exceeded the recommended daily values ​​at the El Paso station and the alert threshold at Los Llanos de Aridane, although it subsequently fell to good and reasonably good levels.