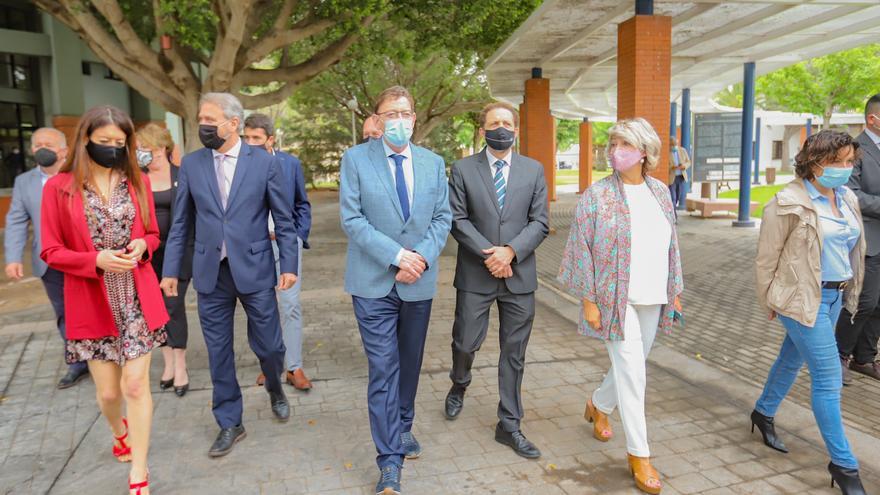 The President of the Generalitat, Ximo Puig, has underlined the importance of committing to policies that link science, innovation and economic activity to face the challenges posed by climate change. This has been pronounced in Orihuela during the presentation of the Center for Agrifood and Agro-environmental Research and Innovation of the Miguel Hernández University (UMH), you have considered an example of that necessary “real fusion” between scientific research, innovation and economics. This organization, located on the Desamparados campus, arises as an initiative of the Plan Vega Renhace of the Generalitat in order to promote R & D & i in the agri-food sector, especially in Vega Baja, and seeks to promote a resilient ecosystem based on the principles of sustainable development. “This fundamental combination between research and economic activity in a basic sector such as agri-food is the way forward, the way to consolidate a primary sector of which this year we have seen its decisive importance, its capacity for resilience and its capacity to generate employment. “, said Puig.

The CIAGRO, created by the Governing Council on January 28, 2021, It is made up of 67 tenured researchers and 24 associates. The research team of this center covers almost all the disciplines of the agri-food and agri-environment sectors, that they go from agricultural production and means of production to markets and distribution, through food processing and production. All this, from an agri-environmental perspective of promoting biodiversity, resilience to climate change and the efficient use of natural resources and, ultimately, sustainability.

In the last five years, researchers from the CIAGRO of the UMH have participated in 18 international research projects, 85 national, 205 research contracts with companies and administrations and more than 700 scientific publications in high-impact journals. In this sense, Stanford University (USA) has recently published a study that places 20 UMH researchers among the most cited in the world and, of these, 8 are members of CIAGRO, whose activity focuses on the development and innovation in the agri-food chain.

The rector of the Miguel Hernández University (UMH) of Elche, Juan Jose Ruiz, and the director of CIAGRO and the Higher Polytechnic School of Orihuela (EPSO), Professor Ricardo Abadía, explained to the attendees the characteristics of the center that “will make our agri-food industry the most competitive“.

Puig has thanked the hundreds of people involved in the gestation of this research center for the work they are developing, a task that, as he has specified, “It is not only for the Vega Baja, but for the entire Valencian Community. And this sense has shown the support of the Generalitat so that the Ciagro-UMH “has, every time, greater dimension and capacity of influence in the whole agri-food sector” of the Valencian territory. The head of the Consell has also underlined the strength of the Valencian agri-food industry, which It was last year the one that created the most companies in all of Spain, and in which the region of the Vega Baja del Segura has a prominent role.

Within the framework of the Vega Renhace Plan, promoted after the DANA that occurred in September 2019, “it is essential to propose a resilient development model, based on sustainable and respectful agriculture from an environmental point of view”, an objective that Ciagro has set itself -UMH, which also sets priorities such as use of traditional crops, the promotion of local commerce, training activities that ensure generational change or support for the creation of the “Vega Baja” designation of origin and brand.

To this end, this research center will conduct actions aimed at analyzing the agri-food and agri-environmental sector of the Vega Baja del Segura, such as the creation of genebanks of traditional crops, the preparation and availability of high-resolution cartography of agrosystems, inventories of crops and traditional foods, or the proposal to create a land bank, with a diagnosis of supply and demand and an inventory of land from abandoned crop.

Likewise, a group of actions aimed at identifying opportunities for improvement and another, aimed at developing training actions, dissemination and transfer of knowledge and information, is also contemplated, the latter section which includes the development and making available of a support web platform of all the information generated in the project, as well as training courses and workshops in different areas and educational, cultural and environmental itineraries in the Vega Baja area.

Ximo Puig, who has been accompanied by the Minister for Innovation, Universities, Science and Digital Society, Carolina Pascual, by the president of the Provincial Council, Carlos Mazon and the mayor of Orihuela Emilio Bascuñana, among other authorities, has also visited in Orihuela the Educational and Interactive Museum of Sciences of the Vega Baja del Segura of the Valencian Community (MUDIC-VBS-CV) , intended for scientific dissemination and which is also based on the Orihuela campus of the UMH.

Puig in the Mudic INFORMATION