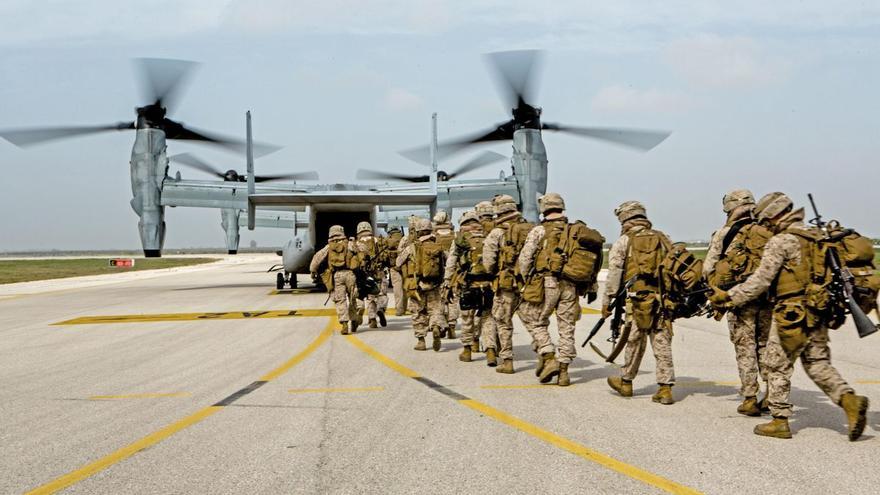 The tender does not specify locations but does leave open the new contractor, Kellogg Brown and Root (KBR, which is listed on the New York Stock Exchange), to provide services in an African destination. If necessary, the budget will be expanded.

Details of the adjudication process They point to Niger as the place for a possible American deployment in the Sahel, transition area between the desert and the savannah south of the Sahara. Sources close to the US administration consulted by EL PERIÓDICO neither confirm nor deny the possibility that the surveillance of this strategic strip in the war against jihadism can also be exercised from locations in southern Morocco; they limit themselves to ensuring that there is no forecast of presence changes in Spain.

The entry into force of the new contract at the Morón base follows various reinforcements of American military support to Morocco and coincides in time with a period of reflection in the United States Defense. Since last January, and by order of the new president Joe Biden, the Pentagon proceeds to a “Review of the global position of the force”, these sources explain. In other words, the examination of the entire deployment of the US armed forces on the planet.

As commanders-in-chiefs, incoming presidents often commission that strategic assessment at the beginning of their term. The review will not be completed before next July, indicate the sources consulted.

Among the points under examination is Morón. The United States has had plans for the Sahel for at least two years. In 2018, the specifications of the contract for civil works in the Andalusian base already began to be drawn up with a view to Africa. And the first change was the name. In the 2010-2015 tender, won by the VBR business alliance, the contract was called TSBMC1 (Turkey and Spain Bases Maintenance Contract). In the contest for the period 2015-2021, which was won by the firm of Colorado Vectrus, the document in dispute was called TSBMC2. And the one that just opened the KBR dealership se llama UA-BOS (USAFE AFAFRICA Base Operation Support, where USAFE corresponds to the US Air Force in Europe and AFAFRICA is the Air Force for the neighboring continent, and not “in”, since its deployment is in the German Ramstein base).

During the processing of the new contract for the Spanish and Turkish bases, the North American administration of Donald Trump included among the performances an “Industry day” in Niamey (Niger). These events are organized to facilitate meetings between the contractor (the Pentagon) and local contractors.

The meeting in Niamey was set for the first time for November 29, 2018, the same day that a briefing took place in Seville, according to the contract’s record, but the Africa meeting did not take place. After other attempts, he was excluded from the SOW (State of Work) after considering the contracting party that implantation in Niger was not yet ready, according to sources from the Morón base, although it had an initial design of a hundred military personnel, an electrician, two cleaners, a plumber and a carpenter. Now, the allusion to an extension to Africa of the missions appears in the contract in a more vague way, without specifying the country.

Naps in Morón, war in the Sahel

The African forecast in the contract obeys, according to the same sources, a need from AFRICOM, the Pentagon’s Africa Command, based in Stutgart (Germany). The Spanish air base of Morón has long since ceased to be a landing strip for fighters or, during the Gulf War, large bomber scale. Today its most numerous aircraft are the V22 Osprey, a hybrid of helicopter and plane for the transport of troops.

Since the modification of the bilateral treaty promoted with Pedro Morenés In Defense in 2015, the number of soldiers that the base can house is higher. At this time, sources from the military compound report, a crew of about 300 marines are staying there, although their number fluctuates because Morón is a transit base, and on occasions there have been 1,000.

When they arrive in Morón, the American military receives a welcome brochure from their command that tells them, among other things, that “Spanish culture is vibrant and festive. The Spanish do everything possible to celebrate holidays, Easter, Christmas and festivities in the city “, and that” in the region of Andalusia, siesta is a big part of their culture. Therefore, most businesses, shops and restaurants close from 2:00 pm to 5:00 pm ”.

It is not precisely the placidity of the siesta that the situation in the Sahel moves. In Niger and Mali, hunger has become a second pandemic over that of the covid, and both are crises that have followed the one of la violence unleashed by the Islamic State of the Greater Sahara and other jihadist terrorist groups, from which about five million displaced people flee.

The soldiers housed in Morón are from the US forces closest to that area, in one of the most affected countries, Mali, France is also carrying out a military mission; It is Operation Barkhane, with the support of Spain among other countries. The US has special operations units and military advisers in 15 African countries, but not a group of marines like Morón’s.

Over the next eight years, during the term of the UA-BOS contract, the marines can be woken up from naps. In examining the global deployment undertaken by the Pentagon, any project of change is possible, warn the American sources consulted. And more in a contract of 974 million dollars. Although at the moment the establishment of an air base in Africa “would not imply change or transfer of assets currently in Spain”, they indicate, although “the cooperation agreement in defense matters is a living document”.

This May, the US / Spain bilateral treaty expired, which is automatically renewed if neither party requests renegotiation, as has been the case. Any change with operational impact, recall sources close to the US Administration, “is examined in the Permanent Committee” to monitor the treaty, which has a US office and a Spanish office, and is notified six months in advance. There is no such notice at this time.

This is underlined by sources close to the American embassy in Madrid after having had to meet numerous “Hoaxes” about a transfer of naval units anchored in Rota, or, more recently, to explain some maneuvers of the aircraft carrier Dwight D. Eisenhower with the Moroccan Royal Navy in waters very close to the Canary Islands.

“The very common exercises, such as those carried out by aircraft carrier combat groups in other parts of the world – say these sources – were always carried out in international waters, where it is not mandatory to ask for permission. Any movement in Spanish territory is always communicated in advance ”.

In the absence of the Biden administration appointing a new United States ambassador to Spain, the Charge d’Affaires of the legation, Conrad Trible, is the highest representative in the country. And a good part of his energy in the last two months is used to deny that the American presence in Spain is going to suffer from the increase in the relationship with Morocco. “We have not had conversations about the transfer you are welcome located in Spain to Morocco ”, he has repeated in various media.