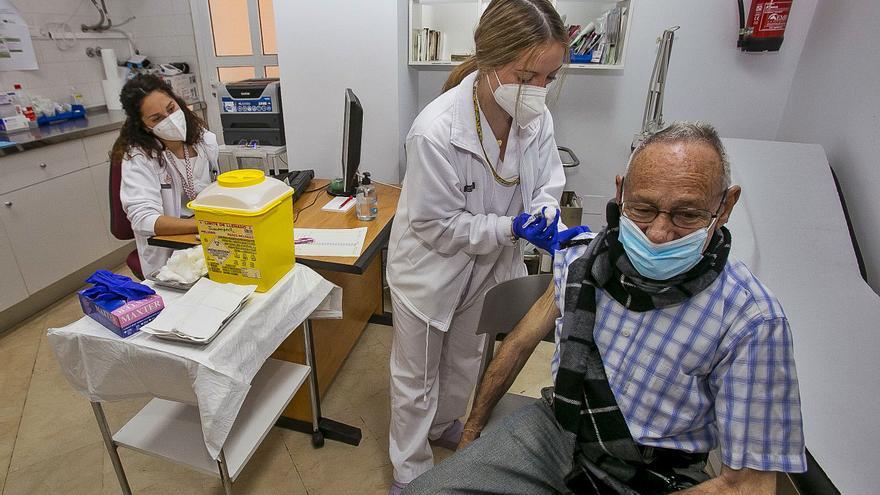 I quote official data from the Ministry of Health, as of March 5.

1. Percentage of the population vaccinated with the two doses over the total in Spain: 2,8%

Percentage of the population vaccinated with the two doses over the total in the Valencian Community: 2,3%.

The Valencian Community is not only below the national average in immunized population. It is that, being the fourth most populated autonomous region in Spain, it is the fourth community with fewer people who have received the two doses, only surpassed in such a terrible classification by the Balearic Islands (2%), Ceuta (1.9) and Melilla (1, 5).

2. Percentage of population vaccinated with at least one dose over the total in Spain: 6,6%

Percentage of population vaccinated with at least one dose over the total of the Valencian Community: 5,6%

Also in this parameter, the Valencian Community is below the national average, which is already poor. It is the fifth from the tail. Only Melilla, the Balearic Islands, the Basque Country and the Canary Islands have given fewer vaccines.

Dosage administered per 100,000 inhabitants in the Valencian Community: 7.834.

Once again, also in this parameter, the Valencian Community is far from the national average and once again it is fifth in line. Only the same autonomies as in the previous section have given fewer vaccines for every one hundred thousand inhabitants: Melilla, the Balearic Islands, the Basque Country and the Canary Islands.

I repeat that these are official data from the Ministry of Health, as of March 5. In other words, the day before yesterday. If you dive into the dozens of statistical repositories and websites -journalistic or specialized- that anyone has access to on the internet, you will be able to find different classifications, where the Valencian Community comes out somewhat better. But in almost all cases the data correspond to February 14, that is, they are out of date. And even so, although by population we should be at the top, in the best of those cases, with figures from twenty days ago, we are in the middle of the table. In other words, far from being a consolation, it continues to point out a problem. To give you an idea, RTVE – not suspected of wanting to harm a government of which the PSOE and Podemos are part, in addition to Compromís – published a map of Spain by communities painted in green on Friday. Green hope, I guess it was the subliminal message. The greener, the more advanced the vaccination; the less intense the color, the more delayed. The Valencian Community did not appear green, but transparent. And it wasn’t a screen effect.

Also Read  Coronavirus in India: 'The meme that almost made me leave my family WhatsApp group'

What’s going on? We do not know. But we have a right to know. The low vaccination figures coincide with the perception that anyone can have when observing their own environment. There are continuous announcements, from those that indicate that this or that group is going to start vaccination, thus transmitting the idea that the previous groups have concluded it, which is not true, to those that from the Generalitat speak of upcoming mass vaccinations and specify the “Vaccinodromes” That is why they are going to be used: IFA, Ciudad de la Luz … But the truth is that there is, at least, an obvious disorder. Above all, in those immunizations that should be easier when carried out through health centers. There are, of course, no queues at their doors. On the contrary, what there are not many days is nobody in them. And the 80-year-old population, which by now should have received at least one dose, is still in very low percentages of vaccination, whatever is said. If we add to that that it is right now, seven days before the anniversary of the Great Confinement is celebrated, when Health is sending messages inviting citizens to update their data (only in Valencian, although when the electoral campaigns arrive Compromís worries that his slogans are read, pronounced and written the same in Valencian as in Spanish, that one thing is to make a homeland and another to play power), one cannot help but think that improvisation is still reigning here. Hasn’t there been time in a year to update that data? Doesn’t Health know the medical and administrative situation of each one of the citizens? Well, thank goodness that we were champions in the application of artificial intelligence, that if we get to be with a pen and paper, the century passes without finishing punctures. Or maybe not. Maybe we have an Administration that if you take it out of the pen and paper, it is lost.

If the political strategists of the Generalitat have been clear from the beginning, it is that the management of this pandemic will be measured by vaccination. Then the social and economic part will come, whose outbreak, which for the moment is only leaving flashes, is going to be terrible. And there, too, all governments will play it. But the first test will be immunization. You have done a good job as a government if you have managed not to lag behind in vaccinating the population under your charge, or you have done a bad job if you lag behind. And, be careful, that in all the places in general, but in the Valencian Community in particular, the vaccination of the population does not only have a health component, although this is the most urgent and important, but also a relevant economic effect. The less immunization, the more difficult it is for essential sectors such as tourism to regain activity. For this reason, listening to the president of Hosbec asking for an opening at Easter is understandable, given the painful situation that the hotel industry suffers, but it is not viable. As we are, it can already occur with a song in the teeth Toni Mayor if the percentage of vaccination, for summer or even for autumn, is sufficient for foreign markets to consider us an acceptable destination.

It said that, within records that are meager for all of Spain (Asturias, which leads this process, only has 4.3% of its population immunized with the two doses and 8.3% with one), it is not possible to understand the Vaccination ratios presented by the Valencian Community, it does not matter if it is with data as of March 5 or February 14. Do we receive fewer doses than those that correspond to us per population and that is why we vaccinate less? I don `t believe. Because if that were the case, it would not be understood then that we were not already setting up the marimorena, it was the Consell, it was the opposition, it was the businessmen, or it was everyone. Are we not efficient in the logistics of vaccination? I’m afraid that may be the problem. But to know what happens, first we urgently need explanations of the Ministry of Health, an increasingly opaque department. And if these explanations do not convince us, which I fear not, the only thing that can be demanded is a radical change in an area where it is already commonplace to comment that between “number one”, Ana Barceló, and “number two” , Isaura Navarro, the first from the PSOE and the second from Compromís, not only do not speak to each other, but they set traps for each other on a daily basis under the age-old principle that I stay one-eyed but I leave you blind. The bad thing is that the one who is taking our eyes out is the citizens.

Where are our vaccines? We deserve to be told. There is an urgent need for an appearance by the Minister of Health in the Courts to give an account of the vaccination plan. But it is just as urgent that the head of the Consell, Ximo Puig, take measures in the face of a situation that is visibly deteriorating. I want to say that, if there are external reasons why our vaccination rate is slower than that of others, the president must set himself the first objective to reverse that situation. But also that, once this matter has been clarified and solved, if necessary, the Presidency of the Generalitat, its head and their teams, cannot continue to act as a conselleria bis to cover the errors of the “official” council. That no longer works, if it was ever useful for something. In Health, it is necessary to cut for the healthy, a change is essential, which cannot be delayed by political strategy, or by party conditions. The Barceló / Navarro tandem does not work, so it will be necessary to separate one, the other, or both. But if we continue with this situation, that final judgment in which the Generalitat trusts so much will end in conviction. Let the president have no doubt. Not even Vice President Oltra, so talkative and strict about so many things and so quiet and understanding when it comes to talking about her partner Isaura.

The City Council of Dénia published yesterday in the Valencian press an interesting announcement about the aid of the Plan Resistir, promoted by the Generalitat Valenciana. Interesting, I say, because in his last point he pointed out: «Novetat: hi can opt for sol-bidders who do not pursue the current of the tax obligations and both the Social Security». It is a wise move on the part of the Dianense Council to highlight this fact, because so far many self-employed have found themselves in a dead end: their loss of income had led them to not comply with their tax obligations, but they could not access aid if they had not paid the last two months. In other words, the game of the boats: first touched and then sunk. That seems to have been corrected, but it has not been reported widely enough to the population. And it is a problem – that of the lack of information – that is going to more and not less. There are as many aid as bureaucratic jungle to reach them. And there is no unifying body that offers up-to-date information on everything that a small entrepreneur, a self-employed person, even a worker, has the right to receive in these moments of hardship. The best point of attraction that the Generalitat could have in Alicante is neither the House of Witches, nor the Syndicate of Torts nor the Ministry of Innovation. A simple local, expert officials and a little flag. That would be presence.