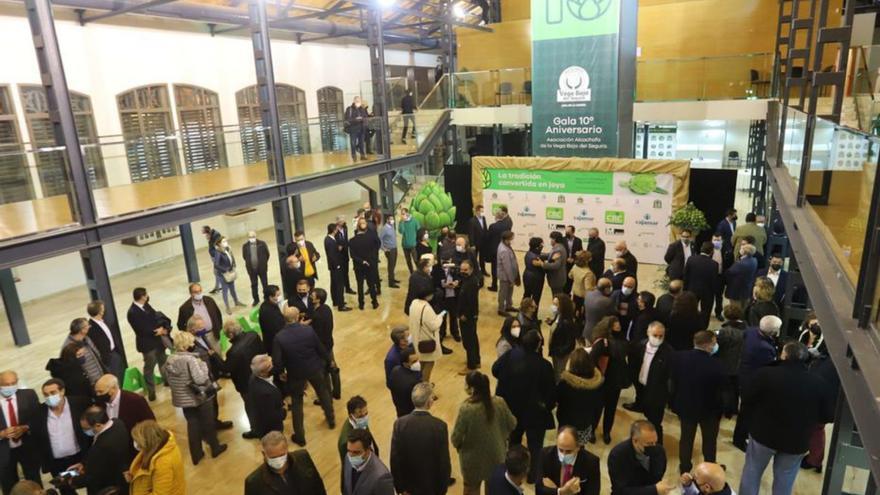 The brand Alcachofa de la Vega Baja del Segura celebrated its tenth anniversary yesterday with a gala that took place in the Lonja de Orihuela. The work carried out over the last ten years has been reflected in the consideration and prestige of a product that has become the jewel of the cultivation of the garden and the fields of Bajo Segura. As explained yesterday by the president of the group, Antonio Ángel Hurtado, during this period the cultivation area has increased by 40% and the average price of the Vega Baja artichoke has also risen by 30% since the Joya de the Huerta.

The event had a wide representation of the socioeconomic, cultural, gastronomic and agricultural fabric of the Vega Baja, in addition to the presence of the dozen of associated companies, mayors and councilors of the 10 municipalities that are part of the brand, city councils of other municipalities from the region, the provincial deputy, María Gómez, the delegate of the Consell in Alicante, Antonia Moreno, the regional secretary of Agriculture, Roger Llanes, and the minister of Agriculture, Mireia Mollà; among others. The gala was full of emotional moments such as the videos in which the history of the association was reviewed, the musical performance of a musical quartet with piano and tenor as well as recognition of the companies, municipalities and sponsors who were given a Exclusive work made for the occasion by the Orihuela-based sculptor, Roberto Reula.

One of the most special moments was the tribute to the farmers who suffered the DANA disaster and who, despite everything, drew the strength to be on the front line during the pandemic to supply the markets. A special musical piece was dedicated to them and a sculpture was delivered to the agricultural unions ASAJA and La Unió on behalf of all the farmers in the region.

In addition, the work carried out by Diego Martínez, who has been at the forefront of this association during all these years, was also distinguished. The sponsors who inaugurated the Vega Baja Artichoke campaigns did not want to miss this event either and sent a video congratulating the association for the work carried out in these years. This was the case of the chefs Moisés Martínez (Bib Gourmand Michelin), Susi Díaz (1 Michelin star), Pablo González (2 Michelin stars), David Andrés, José Luis Cases (winner of the Tapas Made in CV contest), to the actors Pedro Casablanc and Eloy Arenas, and the current godfather, José Ramón Sempere, president of Mercasa. During the gala, the important achievements of this brand were highlighted, which has managed to recover the prestige that this vegetable had in the 60s and 70s and that has placed Vega Baja on the map as a reference producing area.

The president of the Alcachofa de la Vega Baja, Antonio Ángel Hurtado, was “proud to preside over an association that has been so successful and has a promising future. This gala has allowed us to look at the past, discover what we have grown in this time and see what we are capable of doing when we come together, we show the strength of the Vega Baja and shout loudly that we are orchard and that our territory is full of opportunities ”. «All the work carried out – the Almoradí Artichoke Congress, the Dolores End of Campaign Party, the Orihuela International Symposium of the Agrifood Sector (SYA) or the most important artichoke scientific congress in the world – is having very good results and that is what gives us hope and fills us with enthusiasm to continue working for this crop that has become the star product of the region, “he said.