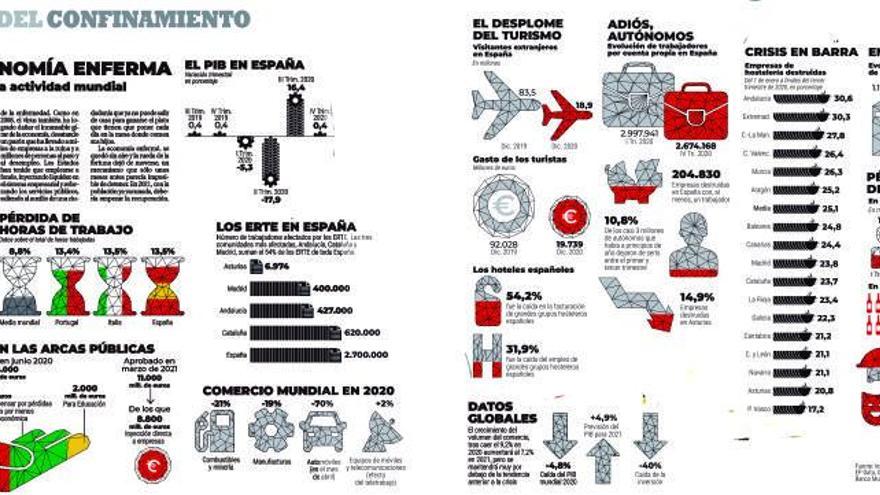 The economic crisis derived from the covid pandemic has caused the tourism sector to accumulate, since March 2020, losses of 11,400 million euros In the Valencian community (9,200 in the province of Alicante), which represents the loss of 70% of the activity. A reduction in tourism business that has a direct impact on the province’s GDP. Of the 12,800 million that tourism had been contributing to the 35,000 million of the province’s GDPl, last year contributed only 3,600 million, a loss of 9,200 million, which will lower the Gross Domestic Product of the province to 25,800 million euros, or what is the same, 26% less. There are hotels that have not reopened since October 2019 because the seasonal closure was followed by the covid crisis and the general closure, from which they could not leave even last summer.

Some 25,000 workers, both in hotels and in restaurants, bars and cafeterias, are still in ERTE and, with Easter lost, hope is in the summer if in the end it is true that mass vaccination begins next April in Spain and in the Community Valencian. For now, the numbers are catastrophic. The airport has practically no connections with Europe, 4,000 businesses have closed their doors in the province and another similar number with serious problems to survive. Of the 14,300 bars, cafes and restaurants, 30%, about 4,300 establishments, have not reopened since the first lockdown occurred in March. And all without the direct aid arriving – on Friday the Government moved to the end to distribute 7,000 million euros in Spain – and not the 2,000 euros per hotel establishment, which have not arrived either.

The crisis continues to hit everything related to tourism and the service sector. The latest data from the College of Notaries on the impact of the pandemic on the sale of homes to foreigners (residential tourism) are revealing. Activity has fallen by 30% in the last twelve months, with 6,800 homes sold less than between March 2019 and March 2020. With the airport without air connections with the rest of Europe, it is impossible to close sales.

The employers estimate that from the Government’s shock plan, 350 million euros should already reach the province -the hotels cannot continue to borrow after investing 260 million in recent months-, and that as of June tourism has a model of Different ERTE with benefits of 100% of the salary for workers, because not all hotels will be able to open in summer, regardless of the degree of control of the covid. The data is there: 90% of British tourism reservations are concentrated for next autumn because, on the other hand, although the river of British people is constant throughout the year, July and August are not months of massive arrivals.

The tourism sector has practically since September without customers, without income and with fixed costs of one hundred million euros, despite the fact that most hotels are closed until next June, when it is expected that a certain normality may have returned and the covid is half controlled, although everything will depend on the rate of vaccination, today too slow. This is the reality of the hotel plant in the province, which has faced the low season with some 160 hotels closed. According to a report from the employers’ association, hoteliers who have decided to close by the end of the season, and, many, suffocated by the pandemic in the form of a lack of tourists, face operating costs for each temporarily closed hotel of between 35 euros (establishments amortized), and 150,000 euros, in the case of those with outstanding loans, larger or subject to the payment of a rent. An average of 100,000 euros per month per establishment, which despite the closure continues to generate expenses. Data that explain the magnitude of the economic crisis derived from the covid, much stronger than the one that caused the explosion of the real estate bubble in 2007. Tourism was then a lifeline for the provincial economy, since there was not even a hotel closure.

Only the hotel management has returned to claim this week to the Consell that it urgently needs an injection of 200 million euros to lost funds, because there is no longer room for more indebtedness.

Toni Mayor, president of the Hosbec hotel association, points out that it is time to open up. “If the figures on the control of the pandemic accompany it, mobility must be opened up, because for tourism it is key.” Hosbec holds the Consell and the central government responsible for the delay in the tourist reactivation, ensuring that the perimeter confinement of Spain in the already imminent Holy Week has demonstrated the failure of the management of the covid. «The hotel and tourism sector of the Valencian Community is in an extreme situation, and considers necessary a planning of the tourist reactivation based on objective data and security procedures with a combination of precision tracing, tests and confinements. Hosbec considers that the current health figures guarantee that the mobility of the entire peninsular and insular territory must be restored by lifting the perimeter closures. A call for help that has fallen on deaf ears because even Madrid has finally accepted the closure of the next San José bridge and during Easter.

Jose Maria Caballe, President of Servigroup, the chain with the most hotels in the Valencian Community, underlines, after a year of pandemic, that “it is not possible to take stock of the last twelve months because we have enough to have survived and, furthermore, this will not be resolved until they open the borders. Meanwhile, we have no choice but to be prepared for the new tourists that will come to us and, as I have always said, maintaining quality and service ».

In Spain as a whole, the tourist debacle has caused a fall of 106,000 million euros in activity (direct and indirect), including 55,393 million less in foreign exchange income that reverts to Spain, which represents a decrease in activity of the 68.9% compared to 2019. The weight of tourism in the Spanish economy falls to 4.3% of GDP, eight points less compared to 2019 (12.4%), the lowest value since data was published in this regard, according to a report by the “lobby” Exceltur.

About 750,000 workers in the different tourism subsectors are affected by the lack of work; 435,000 provisionally by the ERTE and 293,000 dismissed or who have not been hired. The average employment drop in tourism has been 38.1% versus 2.5% in the rest of the rest of the national economy.

On the other hand, the pandemic caused a drop in footwear exports of close to 16%. According to the latest report from the Ministry of Industry, the firms sold shoes abroad for an accumulated value of 2,394.7 million euros. Compared to 2019, foreign sales were 15.9% lower. Traditional toys and textiles in the Community registered falls of 19.6% and 24.4%, respectively. The problem with trade in general in the province is that, in reality, it did not fully recover from the 2008 crisis and the sharp decline in consumption that resulted from that great recession. A factor that, together with the rising cost of the rents of commercial premises and the competition of online sales, left their competitive capacity very diminished.