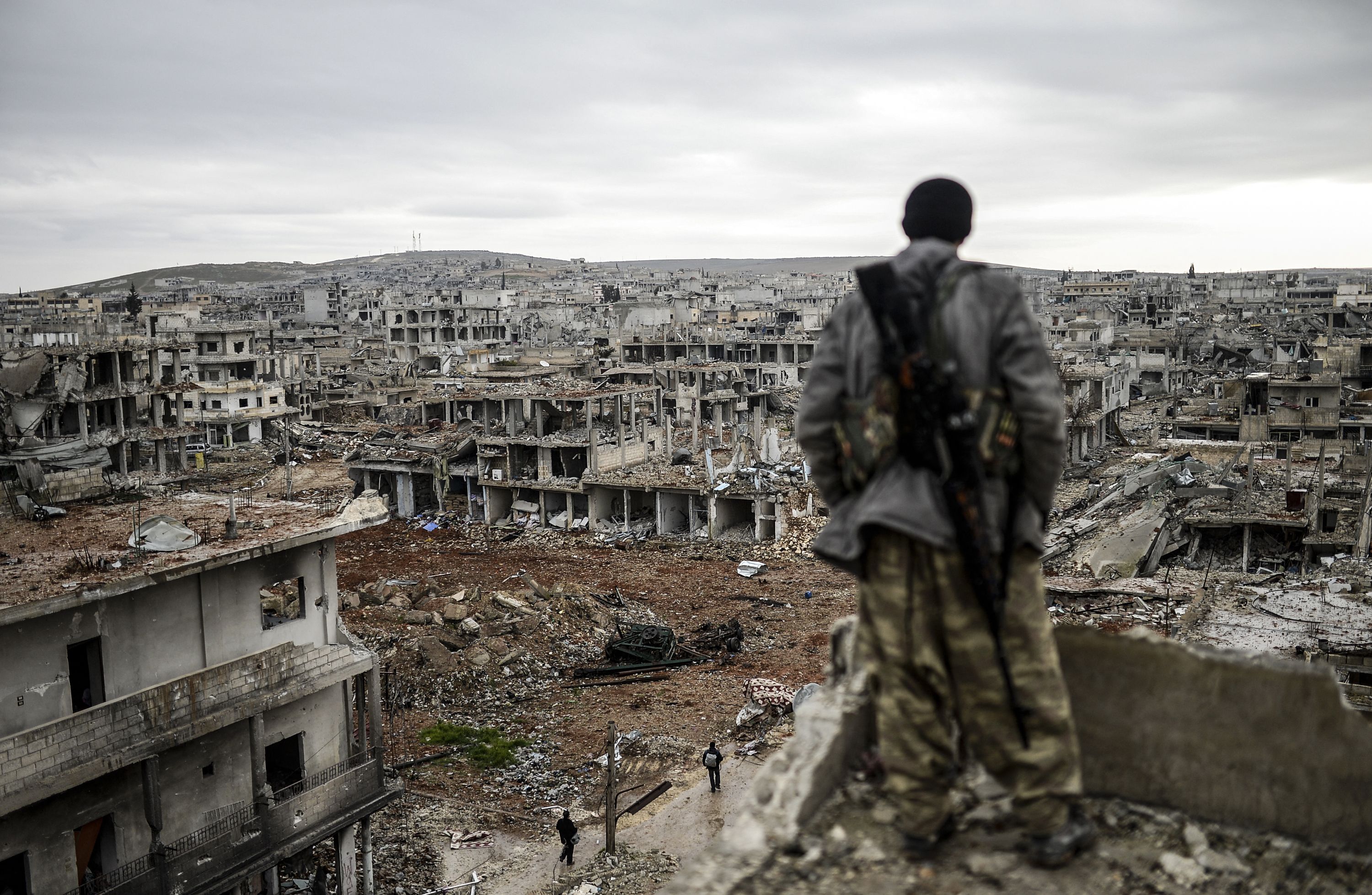 The Syria of a decade ago doesn’t even exist on maps. Two regions that are no longer Syrian, the Golan Heights (since 1967) and the northern Euphrates Valley (as of 2016), are the scene of disputes that run parallel to the civil war in the Arab country, encouraged by powers global and regional. Around the first, Israel, which occupied the southwestern Syrian plateau before annexing it in 1980, to prevent Iran and its Shiite satellite militias, strategic allies of the Damascus regime in the conflict, from taking hold in its backyard. In the second, the occupying troops on Syrian soil are those from Ankara, which fears the creation of a Kurdish belt on the border, associated with its own Kurdish insurgency in southeastern Anatolia. They are wars with a life of their own, even though they have been intertwined in the Syrian conflagration, between sides that feel the existential threat of irreconcilable enemies.

“Israel is waging its own covert military campaign in the middle of the war with the aim of disrupting Iran’s actions in Syria and Hezbollah’s rearmament in Lebanon,” says Ayman Mansour, a researcher at the Jerusalem Institute of Strategy and Security. The ambiguity in the underground battle he is waging with his regional arch enemy has turned in recent years into a face-to-face fight, publicly acknowledged by the Israeli Prime Minister himself, Benjamin Netanyahu.

Analyst Mansour, an Israeli Druze (Middle Eastern religious minority) and former member of the Prime Minister’s National Security Council, believes in his latest post for the geopolitical research center that the goal of expelling Iran from Syria may be too ambitious. and that it is more within the reach of the Israeli Armed Forces to torpedo Tehran’s attempts to consolidate its positions around the Golan Heights and supply Hezbollah with strategic weaponry, such as missiles with high-precision guidance systems.

For the Jewish State, the main threat in Syria continues to be focused on the Al Quds force, an expeditionary force of the Guardians of the Iranian Revolution, a basic pillar in the support front of Bashar al-Assad’s regime, even after the death of his chief, General Qasem Soleimani in a US attack in Baghdad in early 2020. But the greatest risk of large-scale conflict for Israel is concentrated in the accelerated rearmament of Hezbollah, the Shiite militia with which it fought an open war in 2006. Tehran’s Lebanese allies have built up an arsenal of more than 130,000 short- and medium-range rockets in the last decade, including a few dozen with precision guidance. Both contestants prefer to keep the game in a draw. A large-scale missile attack on Israeli territory would predictably lead to another war in Lebanon with unforeseeable consequences. The Hebrew Army frequently resorts to the warnings of biblical proverbs –– “If the rain falls on us, the flood will fall on them” –– to try to maintain that the state.

Until forces loyal to Assad regained control of the Golan border in 2018, Israel had pursued the strategy of establishing a security buffer zone with related rebel forces, which it supported with discreet humanitarian and logistical support. In health centers in northern Israel and in a field clinic on the same border, some 3,000 Syrian wounded were treated, including men of military age. In addition to medicine, clothing and food, these militias were able to receive cash to pay salaries to their combatants and to buy weapons and ammunition. The UN Observer Contingent in the Golan (UNDOF) reported the continuing contacts between Israeli troops and Syrian rebels on the border.

A 900-kilometer frontier of the Turkish border

On the Syrian banks of the Euphrates and along the 900-kilometer border with Syria, largely strewn with walls and barbed wire, Turkey blocks the way to the People’s Protection Units (YPG), the rebel Kurdish militia allied to the United States, now associated with Sunni Arab forces in the Syrian Democratic Front in control of the northeastern third of the country. Its close collaboration with the independence guerrilla of the Kurdistan Workers’ Party (PKK), raised in branches for four decades against the central power of Ankara, is an insurmountable red line for the religious nationalism embodied by President Recep Tayyip Erdogan. To the effective military occupation of the canton of Afrin and two other enclaves, Turkey adds the theoretical mission of monitoring security in Idlib, at the eastern end of the border, with a deployment of patrols and guard posts that amount to an armed wedge. to stop the advance of the Army of Damascus and its allies on the last insurgent stronghold.

NATO member country realigned with Russia and Iran, after having stood up to Moscow in Syria, Turkey’s national interest is to prevent at all costs a Kurdish state of more than 40 million inhabitants on horseback from Syria and Turkey, and from Iran and Iraq. Despite their central role in defeating ISIS on the ground, the Kurds will hardly be able to achieve greater self-determination than their brothers in Iraq. Former President Donald Trump gave them control over Syrian oil fields as war compensation. His successor in the White House, Democrat Joe Biden, has shown no willingness to redeploy more special forces on the ground to support the YPG.

The victorious nations over the Ottoman Empire in World War I already promised the Kurds a state, for their collaboration in the Turkish defeat, in the Treaty of Sèvres (1920), but they were unceremoniously denied it at the Lausanne conference (1923). ).

In short, the Turkish occupation of northern Syria reflects a far from hidden expansionism and is on the way to establishing a new reality on the ground, such as that imposed by Israel in the Golan Heights. Precisely the treaties in which the Western powers shared the spoils of Ottoman domination in the region a century ago deprived Turkey of provinces in present-day Syria and Iraq with a Turkmen population, of Turkish language and culture, which still continues to observe Ankara as a former colonial metropolis.

Guilty of a tragedy without exception on all fronts

No one is fought in the Syrian war from being pointed out by the accusing finger of Amnesty International (AI). Neither the forces of the Damascus regime, which have dropped barrel bombs against its citizens for a decade, nor the opposition militias, which have also tortured and ill-treated civilians. Neither the ruthless Islamic State defeated two years ago on the Euphrates battlefield nor the jihadists of Hayat Tahir al Sham still entrenched in their stronghold in Idlib. Neither the occupying Turkish soldiers in the northwest together with local militiamen, nor the Kurdish People’s Protection Units that dominate the northeast with the support of the United States. Neither did the US aviation, which devastated Raqa, the capital of ISIS; nor the Russian one, which sowed half the country with explosions and shrapnel.

Banned cluster bombs and chemical weapons have killed and injured tens of thousands of civilians and destroyed essential facilities such as hospitals and schools. For this reason, Amnesty International first holds the regime of President Bashar al-Assad responsible for the war crimes and crimes against humanity investigated by a commission of jurists created by the UN General Assembly in 2016. The opening of processes under the principle of Universal justice in countries like Germany, which has recently convicted a former Syrian intelligence agent of illegal detention and torture, offer a first glimmer of hope about accountability for the culprits.

“The (permanent) members of the Security Council have a duty to help the people of Syria, but they have abandoned them. Ten years after the start of the war, those who perpetrated horrible crimes against humanity continue to inflict immense suffering on the civilian population while they evade the action of justice, ”warns Lynn Maalouf, deputy director for the Middle East of the humanitarian organization. In a statement released this Friday, he calls for the end of the vetoes crossed in the United Nations body in order to prosecute the perpetrators of the atrocities.

Russia and China have vetoed at least 15 times over the past decade in the small-scale world war raging in the Arab country. “The states [involucrados en el conflicto] They have put their interests above the lives of millions of children, women and men by allowing Syria’s story of terror to be endless. Without justice, the bloody cycle will continue ”, emphasizes Maaluf on behalf of AI.

The Syrian regime restricts the passage of international humanitarian aid and maintains arbitrary arrests and ill-treatment, but insurgent militias also commit torture and kidnappings in its northwestern stronghold of Idlib. Over the past ten years, all parties to the conflict have caused thousands of unjustified deaths, caused massive internal population displacement and forced the exile of five million civilians. Now more than ever, Amnesty International maintains, justice is more important than ever in Syria.