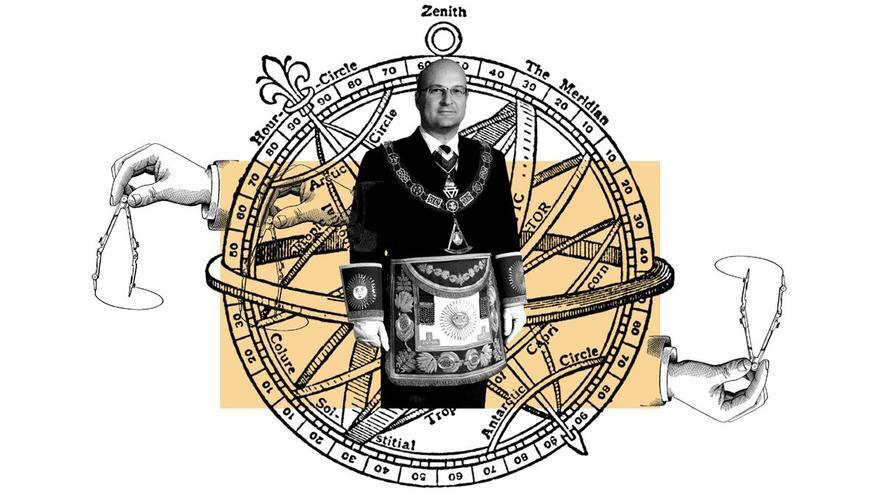 Three candidates aspire to succeed the controversial leader of the Grand Lodge of Spain who spent 50,000 euros a year on travel

Freemasons have a saying to refer to themselves: “We are not secret, we are discreet.” For this reason, within the Grand Lodge of Spain (the branch that this kind of international society has in our country), it generated some discomfort that its Grand Master, Óscar de Alfonso, uploaded a series of publications to his social networks that seemed violate that principle of discretion.

The most controversial dates from 2018. He hung a photo in a pool, hugging another white-haired Mason and holding two coconuts at the height of his breasts. He drank from one of them through a straw. He accompanied it with the following text: “Covering my tits with two coconuts. I couldn’t resist sucking on two coconuts. #sex #pool #grandpapedofiloamylated #cocci #sucking ”.

That was in Brazil, the same country where he uploaded another photo with a beer and a sausage and wrote “Fuck the diet. But, damn, how well I have been eating this nasty “. On his trip to a Masonic assembly in Albania he posted the hashtags “#heengordadotreskilos and #mehancebadocomoaungorrino “ to illustrate how well they had fed him on his visit to Tirana. And in his journey through Gabon he boasted in his networks that he was “enjoying a good Dominican cigar and a good Venezuelan rum. All this thanks to the magnificent hospitality of our Gabonese brothers ” #fumandoespero #solohombres #goodtimes “.

Óscar de Alfonso has a trail of controversial publications like that, some already deleted. Photos that he was uploading in his travels around the world, as a Masonic leader. His detractors point out that he has traveled more than 400,000 kilometers between 2018 and 2020. His position is unpaid, but they accuse him of having spent about 50,000 euros per year from the Lodge for representation.

It looked like the criticism was going to cost him his job. Óscar de Alfonso appeared in the Masonic elections of 2018 to revalidate the position he had held since 2010. He apologized for the coconuts and ended up being reelected with 59% of the votes. The strong man of the Spanish Freemasons was still at the head of the lodge. But now he is leaving.

Oscar de Alfonso, 53-year-old Valencian lawyer, instagramer, former Thai boxing fighter project, passionate about scuba diving and going around the world. The man who has led the Spanish Freemasons for 11 years already has an expiration date in office. He has announced that he will call early elections and that he will not run. In all probability they will be held in February or March 2022. And among the 2,500 freemasons in Spain, three names are already ringing as they aspire to inherit his throne.

The first is a PSOE politician from Menorca who has resigned from being a councilor to focus on his campaign. He is the only one who has made his candidacy official and who has wanted to attend EL PERIÓDICO DE ESPAÑA. The second is Óscar de Alfonso’s henchman, a continuing candidate who is currently a director of the Grand Lodge of Spain. The third is a Basque socialist senator who would represent the disruptive option.

Be a mason today

Freemasons. That little accessible world, ultra-masculine, surrounded by mystery and mythologized by the cinema. Its mere mention evokes older gentlemen dressed in robes, meeting in secret and performing rituals by candlelight. Or the dictator Franco warning the Spanish of “a Jewish-Masonic-Communist-International conspiracy.” Freemasons continue to exist, although in Spain they are in full crisis.

They were legalized in 1979, after Franco’s death. But they have existed for a couple of centuries and have always been linked to the spheres of power. “Before, people with job expectations became a Mason in order to prosper,” some former members of the brotherhood tell this newspaper. Nowadays, however, they influence much less than they would like. At least in our country. In England, for example, the leader is the Duke of Kent. In Spain, its president is an instagramer lawyer whose popularity comes from his controversial photos.

The recent tendency of the Grand Lodge of Spain (GLE) to appear in the media and seek social relevance collides head-on with the principle of discretion. This has caused many Masons to abandon the project. Some, consulted by this newspaper, warn that “in addition, the Grand Lodge of Spain is flaky and bland. Meanwhile, mixed masonry (lodges that accept women, which is not the case of the GLE), begins to have more boom. Either we change and return to normality, or they will sink Spanish Freemasonry ”.

“I have an illustrative anecdote with that: a couple of years ago I resumed a relationship with a former Grand Master, who has already died. I asked him about the future of the Grand Lodge of Spain and he told me that either things would change, or in 13 or 14 years we would have disappeared ”. It is assured by Adolfo Alonso, a Menorcan lawyer with an office in Bilbao. His specialty is Family Law and he has been in charge of the defense of Francesco Arcuri, husband of Juana Rivas.

Alonso is a socialist militant and was twice a candidate for the Congress of Deputies for the Basque Country. His last foray into politics dates from the last municipal elections, when he ran on the socialist lists for Sant Lluís (Menorca). It was number 5 and the PSOE removed 4 councilors. Now, the mayor of Sports has resigned. Alonso would have to, by list, assume the minutes. But he has just announced his resignation from being a councilor. The reason: he has been a Freemason for 25 years and is preparing his candidacy to relieve Óscar de Alfonso.

“What I think of the great Master (Óscar de Alfonso) I’ll tell him. I will not hide the fact that the issue of photos generated discomfort in large sectors of the Grand Lodge, who do not understand why photos like these have to circulate through networks “, Adolfo Alonso acknowledges, who immediately picks up cable:” In spite of that, and from that he said that he would call early elections, that is already part of the past ”.

Alonso measures his words because his candidacy happens to be “The conciliator, the third way if you want to call it that. We want to build bridges and resolve the tensions of the past ”. Opposite will be a continuist candidacy led by Jose Maria de Haro, current director of the Governing Council and one of Óscar de Alfonso’s trusted men. It will also have to compete with a third more disruptive, which would be headed by the socialist senator from Biscay Txema Olazaga and advocates directly for the reform of the Masonic constitution. Both De Haro and Olazaga have declined to comment until elections are called.

10 times around the world

What is certain is that, whatever happens, Freemasonry is in a delicate situation. Because beyond the prejudices that date back to the Franco regime, the truth is that from within the lodges currents and groups have been consolidated that have caused a crisis within the institution. The figure of Óscar de Alfonso is behind almost all the controversial events.

It is not only about the photos and his love for social networks, but also. His many world travels and the use he has made of Lodge funds have caused controversy. Between 2018 and 2020, the Grand Master is counted about 90 trips, in which he has made 400,000 kilometers. That’s 10 times around the world. Among its destinations, some as exotic as the Mauritius, Brazil (several times), Panama, Nicaragua or Ivory Coast. In social media posts, he used the hashtag #soywillyfog.

These trips are paid for by the funds of the Grand Lodge of Spain, as representation expenses. The position of Grand Master is unpaid, but on these trips, Óscar de Alfonso has been spending around 50,000 euros per year. Freemasons consulted by this newspaper complain: “Our fees go on trips of this man, who in turn invites other freemasons who come to Spain to visit.” In this regard, the candidate Adolfo Alonso anticipates: “If I win, one of my proposals will be to halve those items destined for representation expenses.”

The complaint of the 100 brothers

Trips around the world, controversial photos, social networks, lack of discretion, controversy with the destination of the funds … are the main reasons why a critical current against Óscar de Alfonso was generated within the brotherhood. It led to war when Oscar de Alfonso himself dismissed the Grand Treasurer.

The GLE has 3 senior positions elected by assembly: the Grand Master, the Grand Treasurer and the Grand Speaker. The first suspended the second, José Modéjar, from his duties in 2019. The reason was that he accused him of being behind a blog critical of the leader. For his part, Modéjar assures that he was suspended because Óscar de Alfonso saw in him a tough rival for the elections.

Be that as it may, De Alfonso suspended him from his position on a precautionary basis, but the file did not prosper. Modéjar continues to ask for explanations and for his case to be resolved, because in the meantime he is obliged to continue paying his fees. The Modéjar case led the third high-ranking official, the Grand Speaker, to resign.

After these losses, Óscar de Alfonso placed two of his trusted men in the positions of Grand Treasurer and Grand Speaker. “He put them to the finger, although later they were endorsed by the assembly,” an internal source tells this newspaper, recalling that of the 2,500 freemasons in Spain, not all have the right to vote, a little more than a thousand, at most.

After those events, 100 Spanish Master Masons filed a complaint. For the suspension of the treasurer, for not having convened an Extraordinary Assembly, for waste and abuse of authority. In any case, they are ‘Masonic complaints’, which run through internal channels and have not reached the ordinary justice system. They have not had any kind of tour within the Lodge either.

The GLE was little less than a powder keg and the departure of Óscar de Alfonso opens a new horizon for a group that will have to row a lot to get back on track. Freemasons have remained an anachronistic institution whose end is not quite clear. Adolfo Alonso speaks of “being useful to society through the participation of civic works, creating foundations or NGOs that generate funds to promote schools, put more ambulances or coast guards. That on the material plane. At the level of ideas, promote tolerance, freedom and equality ”.

That purpose of equality clashes with the current reality of the Grand Lodge of Spain, where women are still prohibited. They are international standards. Meanwhile, mixed lodges are growing in parallel and are gaining ground to the GLE, which has enough to solve its internal crisis and which seems to have left behind the principle of discretion.