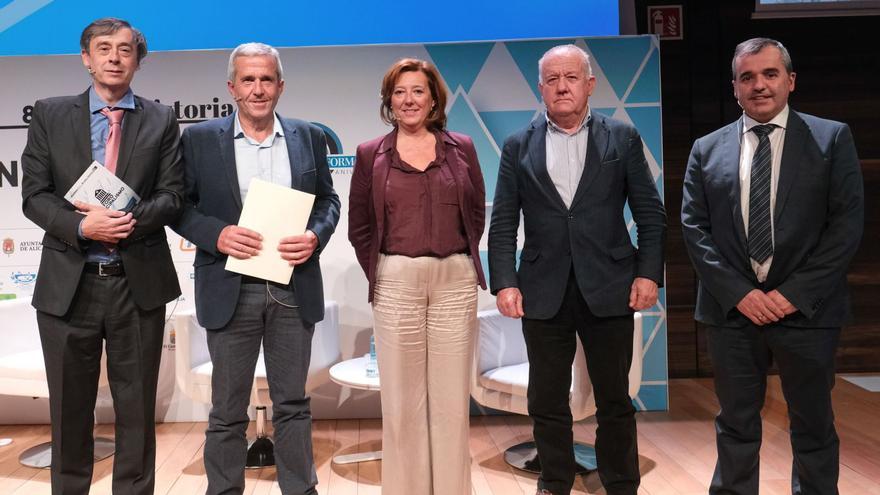 If the four mayors at the last round table of the Municipal Information Forum had something in common, it was the problem of water in the fields of the province. To give voice to this reality, the mayor of Almoradí, María Gómez; the mayor of Aspe, Antonio Puerto; the first mayor of Mutxamel, Sebastián Cañadas; and the mayor of Pilar de la Horadada, José María Pérez.

With one voice they defended what for them is the fundamental pillar of the daily work of thousands of farmers, and the continuous struggle that they are forced to undertake to alleviate water problems.

Without agriculture, the Vega Baja would not be what it is. We need quality water at an affordable price »

María Gómez called for “quality water at an affordable price”, since “without agriculture, the Vega Baja would not be what it is”. The mayor of Almoradí put in value both the products of the land and the figure of the farmer, “who are the great losers with the increase in costs in recent years. You need a fair and adequate price. ‘ “The municipalities must defend the water from the two transfers, the Tajo-Segura and the Júcar-Vinalopó, to maintain what we have and not go backwards,” claimed the mayor, who was supported by the mayor of Aspe, ” the Júcar-Vinalopó is more than urgent and necessary ». A statement that made it clear, once again, that problems are common to all municipalities “and are above ideologies,” stressed Antonio Puerto, who stressed that “quality water is necessary but above all to a good price”.

Also Read  first concession of the liberals to the socialists

Both transfers also added the support of Sebastián Cañadas, who stated that “the transfer water is essential for the province’s agricultural future because, due to its high price, it is not feasible to use the flows from the Mutxamel desalination plant to irrigate the plantations.” .

Water is a problem. The transfer is essential for the agricultural future of the province »

For his part, José María Pérez, mayor of Pilar de la Horadada, recalled when in his childhood the water from the transfer began to arrive when the wells were beginning to run out of water. «With the transfer we went from nothing to having a cutting-edge agriculture. Nowhere in Spain is paid for water as expensive as here, “denounced the mayor. Pérez valued in a very special way the role played by the Spanish Levante as the “garden of Europe”, which must be “conserved.” “With the pandemic, farmers have been seen working to bring food to the rest of the continent,” declared the mayor of Pilar de la Horadada.

Faced with the question of what else can the city councils do launched by the moderator of the table, Manuel Alarcón, head of the edition of Elche de INFORMACIÓN, Sebastián Cañadas explained that they are working to “promote gastronomy and tourism based on agriculture as a basis ». For this, they are in a process of recovering the Mutxamel tomato with the collaboration of the Miguel Hernández University. However, he regrets that “agriculture is not like it used to be.”

Another problem that came up during the debate was the use that is given to agricultural land. It was the mayor of Aspe, Antonio Puerto, who said that “we must stop overexploiting the aquifers, but only when there is a real and affordable alternative.” He recalled when in 2000 agricultural land began to be used to make “macro-urbanizations with a golf course and they stayed in the middle, now we are faced with the green energy boom.” He advocated strong protection of agricultural land “because it is vital, 11,000 people eat from agriculture.” “What do we prefer, have the soil full of fallow or a soil for agricultural exploitation that generates life?”, Asked the mayor.

The solution proposed by Puerto was “to professionalize agricultural work so that it does not remain as a residual work. Give one more gift in which the worker is a professional. Offer specific training so that these professionals want to seek their future in the field.

Finally, José María Pérez objected that young people “do see a future in the field, if they are allowed to work they have the ability and desire to do things and obtain the most advanced agriculture.” “The young farmer is committed to modern and ecological agriculture.” However, he clarified that “there is a factor against agriculture and that is that Spanish products are required to have a very strong control that is not required of those arriving from other countries.”

Climate change wreaks havoc on agriculture, as was the case with DANA in September 2019. In this regard, María Gómez highlighted “the responsibility with which municipalities are facing the consequences of climate change to improve rainwater networks and deal with the best possible way to protect agriculture. ‘ It should be noted that farmers have been working for years on actions aimed at modernizing irrigation systems to save as much as possible the scarce and expensive water resources available to them.