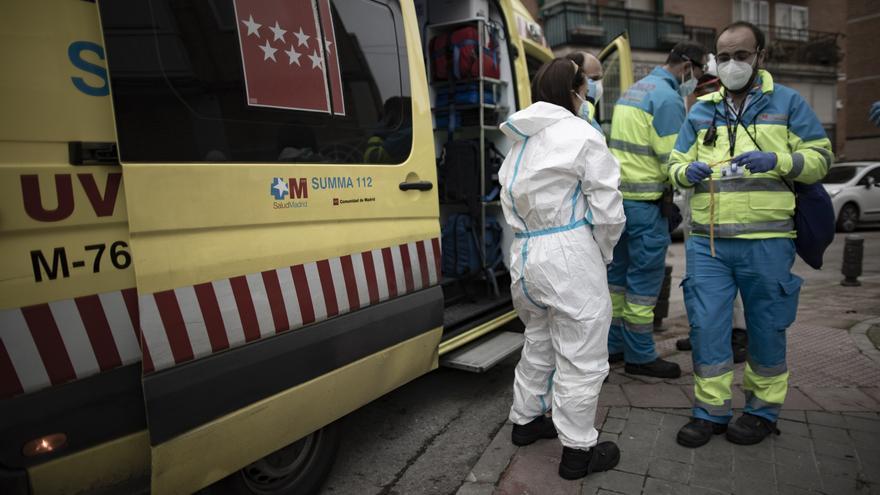 The call “weekend effect”, for which there are usually fewer infections when also have fewer diagnostic tests, does not hide the uncontrolled advance of the fifth wave of the covid-19 throughout the country, with some communities once again registering very alarming figures.

This is the case, for example, of Catalonia, number of new infections are still out of control, with 6,157 in the last 24 hours, while the increase in hospitalized patients continues and a new death has been recorded from the pandemic.

In addition, the accumulated of the last seven days is 40,430 new infections, that is, an average of 5,775 daily, a figure that has not occurred since October 2020 and that has multiplied by ten in fifteen days.

For this reason, the Government of the Generalitat plans to approve new measures between tomorrow and Tuesday to stop this explosion of infections given the concern about the affectation that is already having in Catalan hospitals, as announced this Sunday by the president, Pere Aragonès.

The Madrid’s community, meanwhile, has registered this Sunday a death from coronavirus, like yesterday, and 848 new positives compared to 2,322 on Saturday, with twenty-three more patients admitted to the ward compared to the previous day.

Although the decrease in infections compared to those of the day before is considerable, these new positives today are double those of a week ago, since on Sunday, July 4, they were 414.

Likewise, hospital pressure rises to 306 patients today on the ward compared to 283 on Saturday and 243 last Saturday, while those admitted to the ICU are 107, one less than yesterday and nineteen less than seven days ago.

Another community where epidemic data continues to skyrocket is Cantabria, which has added 153 more infections that place the accumulated incidence at 14 days in 471 cases per thousand inhabitants (13 points more) and the number of hospitalized has increased again.

With this situation, the Cantabrian region would go to level 2 risk of covid transmission if one more patient enters the intensive care units, which would imply tightening the restrictions to stop the infections.

Basque Country has registered in the last hours other 669 infections and the positivity rate has risen from 7.9% to 9.4% in a single day, the second highest percentage since November 9 of last year, although this increase in cases has not had an impact on hospital admissions .

On Galicia, the transmission of the coronavirus has been slightly moderated, although it adds almost 400 new patients with active infection while the number of hospitalized increases to 56, nine more. The average in the ICU is 40 years or less and nursing homes have returned this weekend to report cases more than a month later.

On Navarra the positives rise again to 335 and the positivity rate stands at 16.2%, While three people were admitted yesterday, one of them in the ICU, so the total number of hospitalized now rises to 30; and Aragon has reported 589 cases, 181 less than a day before but 365 more than a week ago.

Murcia has also experienced a slight decrease in infections, with 214 new ones, 72 less than the previous day, although positivity already reaches 7 percent; Y Estremadura has registered 246 positive cases in the last 24 hours, (119 less than the day before), although four outbreaks are reported and the cumulative incidence continues to rise: 269.17 cases at 14 days and 164.84 at seven.

Y Canary Islands has reported this Sunday 407 new cases and two deaths in Tenerife. 231 people remain admitted to the hospitals of the Islands, 37 of them in the ICU, and the cumulative incidence at 7 days stands at 130.24 cases per 100,000 inhabitants and at 14 days in 222.39 cases.

Vaccination progresses and incidents too

Despite the vaccination continues to make good progress throughout Spain and also some of the screenings that have been carried out in recent hours among the youngest such as those from Zamora or Salamanca, however, the parties illegal and incidents that also happen constantly they do not help stop the virus.

On Sevilla, for example, the Local Police have evicted about 600 people last morning in four establishments due to excess capacity and non-compliance with the measures, while in Malaga agents have dissolved a concentration of a hundred young people, some of whom drank alcohol and others did not wear a mask despite not keeping a safe distance.

On Palma de Mallorca, the Police have closed three brothels and a entertainment venue where people danced on the night from Saturday to Sunday and have drawn up 149 acts of infringement for bottles and other breaches of anticovid regulations.

And in Ibiza, 800 people have been evicted this morning from the port area, Sa Penya and La Marina who remained in the street after 2 in the morning, playing music, singing and consuming alcohol, after the closure of bars and restaurants, causing inconvenience to the neighborhood.