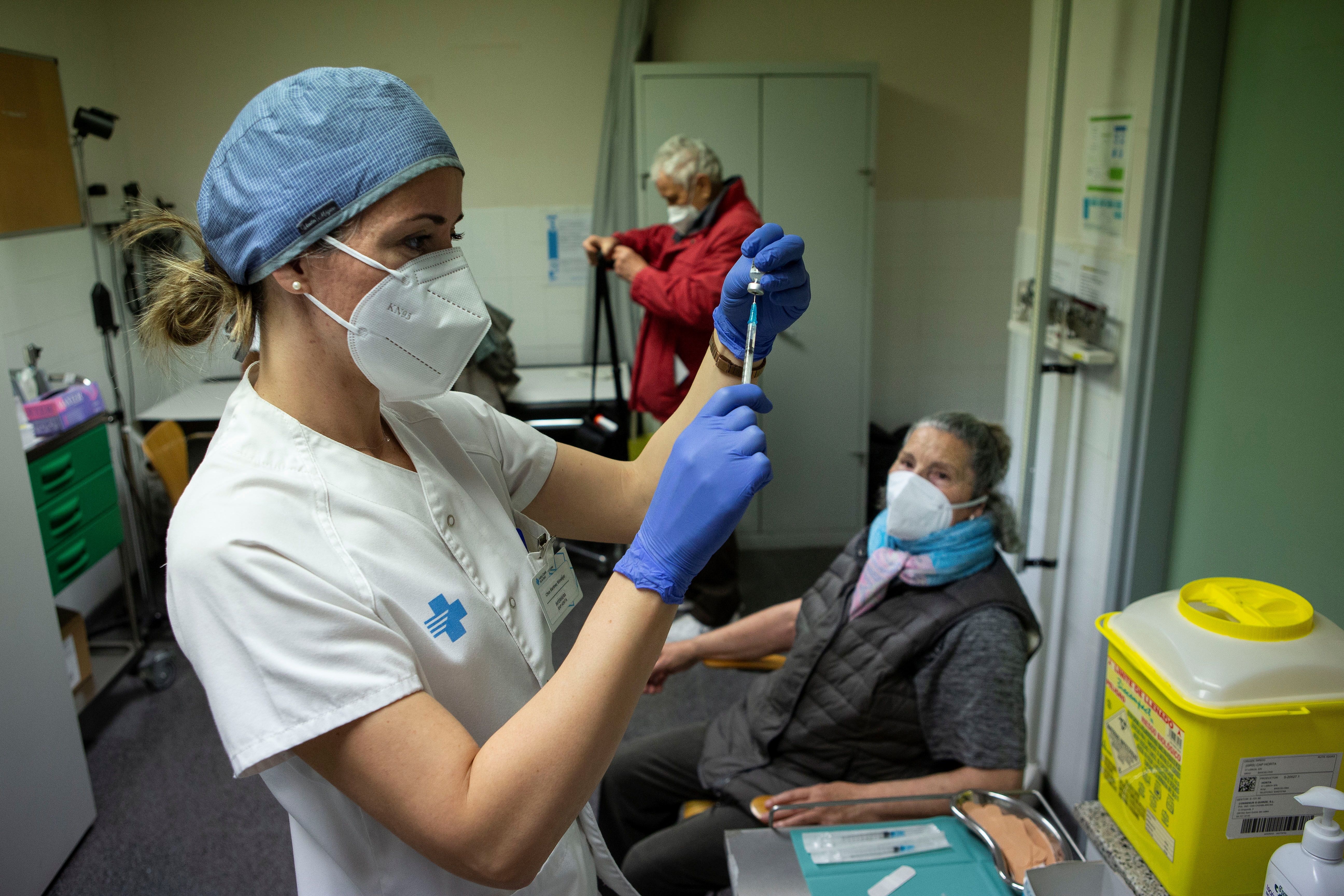 Vaccines have turned on the light at the end of the pandemic tunnel. But there is still a way out of the darkness: an immunized person is protected against severe forms of the disease, but can contract the virus and, to date, its ability to infect others is not known – although it is presumed that very little-. With only 2.8% of the population vaccinated in Spain, there is no herd immunity and those vaccinated have to stay as they are. For solidarity. They cannot bypass restrictions or discard security measures, such as a mask. At least for now. Some countries have already opened the doors to a new world for the vaccinated and the United States, for example, allows the immunized to gather indoors without a mask with each other or with low-risk people. The European Union, for its part, is moving towards the creation of a vaccination certificate, such as Israel or China, to facilitate the mobility of those vaccinated to reactivate the economy. The voices most critical of this type of passage, however, warn of the lack of scientific evidence about the risk of zero transmission after immunization and warn that these certificates threaten to divide society between vaccinated and unvaccinated, especially when the access to vaccines is limited.

More than 1.4 million people have completed the vaccination regimen in Spain. That is, your body is ready to neutralize the virus before it causes serious illness. What is not clear evidence is whether those vaccinated can infect, although epidemiological data collected so far suggest that transmission, if any, is low. But there are no conclusive studies that certify it. An essay with UK health authorities found that vaccination prevents symptomatic and asymptomatic infectionBut this research has yet to be published in any scientific or peer-reviewed journal. “Scientifically it cannot be said that an immunized person does not transmit. Zero risk has not been proven ”, ditch Carmen Cámara, general secretary of the Spanish Immunology Society.

When in doubt, experts and health authorities have applied “the principle of prudence.” Above all, when the vast majority of the population has not yet been vaccinated and remains unprotected. For this reason, those 1.4 million people vaccinated in Spain cannot do much more than they did. If anything, the elderly in the nursing homes, who are already massively vaccinated, can loosen their restrictions a little (much tougher due to their situation of vulnerability) and equalize them to those of the general population. Two weeks ago, for example, a group of elderly people went to the theater in Madrid, an activity that was already allowed for the rest of the citizenry. “The vaccine is not life insurance for any contingency. It is the insurance to not die, but not to not infect you. You better take care of yourself and others ”, recommends Daniel López Acuña, former Director of Emergencies at the World Health Organization (WHO).

Some countries, however, have already opened the door to relax restrictions on those vaccinated. The US Center for Disease Control gave the green light Monday for people who have completed the guideline to gather indoors without a mask or safety distance. Even with non-immunized people, as long as they are low risk. And, in addition, the vaccinated will not have to quarantine or a diagnostic test if they come into contact with a positive, unless they have symptoms or live in group settings. In public, however, they will have to continue to maintain protective measures and avoid large gatherings.

Other governments are also working to enable vaccination or immunity certificates that allow more room for maneuver, either to cross borders or to access certain places in the same country. For example, Israel, where more than half the population is already vaccinated, has implemented a digital pass that gives access to gyms, shows or face-to-face university classes only to immunized people. Even in the bars, which have opened after six months closed, there are differentiated measures: only the vaccinated will be able to access the interior of the premises; the others will have to stay on the outdoor terraces. China has also launched a certificate with vaccination data and diagnostic tests for cross-border travel.

The European Union, for its part, is accelerating the creation of a vaccination passport that would facilitate mobility between member states. After a first discussion with the countries, the European Commission is studying including people with negative CRP or who have passed the covid, although the formal proposal will be known next week. With this last assumption, the EU once again puts on the table a proposal that the former president of the Generalitat, Quim Torra, had already raised last April, within his de-escalation plan. Just as then the measure ran into criticism from the scientific community and even from the WHO – at that time it rejected it due to the lack of evidence on how the immunity of the infected worked – the voices consulted are now again warning of that giving a certificate to a person who has had the disease can encourage people to become infected to access the privileges provided by that document.

But this is not the only suspicion raised by these digital passes. “It gives us false assurances because the risk of infection, even if you are vaccinated, exists. For the purpose of giving us full health security and avoiding the importation of this disease, the passport does not work, ”López-Acuña maintains. “From an ethical point of view, it seems outrageous to me when there is no universal access to the vaccine,” says Cámara. According to the European Center for Disease Control (ECDC), the EU has administered almost 38.5 million doses, but the population with the full regimen (most vaccines require two doses) is below 6% in all countries.

There are too many loose fringes, the critical voices insist. “One thing is that a record remains in the medical history, that you have a vaccination card and another an immune passport when we do not know if it prevents infection. And, in any case, who will have access to that passport? Citizens of rich countries. Because vaccines have not yet reached many developing territories and this will increase the gap between countries. And, on the other hand, what do we do with those under 18 [para los que no está indicada estas vacunas]? ”, Asks Amós García, president of the Spanish Association of Vaccination. Most countries in Africa, for example, have not yet started vaccinating. Along these lines, the executive director of the World Health Organization (WHO) Emergencies Program, Michael Ryan, has also rejected that countries intend to request a vaccination certificate to travel because it will create “more inequalities”, he justified.

The European Commission plans to present its digital certificate on March 17. With its sights set on saving the summer tourist campaign, the European body has not yet clarified, however, what its definitive uses will be – predictably it would serve to enter a country, as is the case with vaccination against yellow fever in areas where it is disease is endemic—, or the conditions to have it (what will happen with minors or with people with contraindications to vaccination). Among the member states, there are also discrepancies: while Spain and Greece encourage the so-called “green digital pass”, France and Luxembourg have shown their rejection due to fear that first and second class citizens are believed to be due to the fact of being vaccinated.

“No intervention is exempt from collateral effects. There are unwanted effects in any community intervention ”, resolves the infectologist Oriol Mitjà, promoter of the immune passport in Catalonia a year ago. The doctor admits that the zero risk of transmission among those vaccinated cannot be guaranteed and that there may be people who want to be infected to get the green pass, but they are risks “that can be considered and mitigated”, he points out. For example, maintaining preventive protection measures, such as the mask. “The alternative to the green pass is to close for everyone. But it cannot be open to everyone because you endanger public health, “he says. Although the epidemic curve is downward, the incidence of cases is still very high in much of Europe.

Chamber, for its part, proposes to change the passport to do more tests. “The diagnostic tests on arrival should be reinforced: compulsory antigen test at the point of arrival for all tourists who enter the country. It seems to me more egalitarian and effective ”.

What is clear is that, in a few months, many countries will coexist with part of the vaccinated population and another part not. “The initial idea was to continue with the measures of protection and prudence indoors until the end of the year, but there will be those who want to make distinctions. But this pandemic is complicated and we will see how the variants evolve, which will try to escape the effects of the vaccine ”, alerts Alberto Infante, emeritus professor of International Health at the National School of Health of the Carlos III Health Institute. Toni Trilla, head of Preventive Medicine at Hospital Clínic, doubts that the Israeli model will be replicated in Europe: “When the majority of the population is vaccinated, many problems will be reduced because although vaccines are not 100% effective in reducing transmission, the fact that many people are vaccinated, will help the virus circulate less. But, for now, in the public sphere, I am vaccinated and I will do the same as you ”. Trilla also points out that passports “have an expiration date” because it is not known how long the immunity will last “and it will be necessary to update, he adds, those possible advantages that green passes provide.

What will persist longer are inequalities between countries, especially with developing countries, where vaccination will be slower. “We are going to spend a few years of dystopia, in a world of vaccinated and unvaccinated. Mobility within the EU will be allowed, but we will live with a map of access restrictions for Africa and Latin America for a longer time ”, Infante assumes.

Among bioethicists themselves there are also discrepancies regarding the bonanzas or not of this type of certificates. “If in the short term we already have vaccinated all population groups that have a risk of mortality or severe comorbidity from covid-19 (see, substantially, the elderly), the presumed risk of transmission that does not prevent the being vaccinated, although, as we have indicated, it will surely mitigate it, it would not endanger the life or integrity of the most vulnerable groups, ”the president of the Bioethics Committee of Spain, Federico de Montalvo, justified in an article in EL PAÍS. And although he admitted that “from a deontological dimension, the fairest thing would be to wait for universal access to vaccines”, then he added: “It is good not to forget that a society with a worse economy is very likely to have worse health. Certificates and passports, despite the objections mentioned, would ultimately be protecting the health of society and not just the economy ”.

On the other hand, Itziar de Lecuona, deputy director of the Bioethics Observatory of the University of Barcelona, ​​totally rejects any type of immunity certificate. “It affects fundamental rights and opens the door to discrimination between vaccinated and unvaccinated. They can end up asking for it to work and it is to give privileges to certain people ”, he insists. And it warns that, in any case, there should be a law that regulates this type of device.