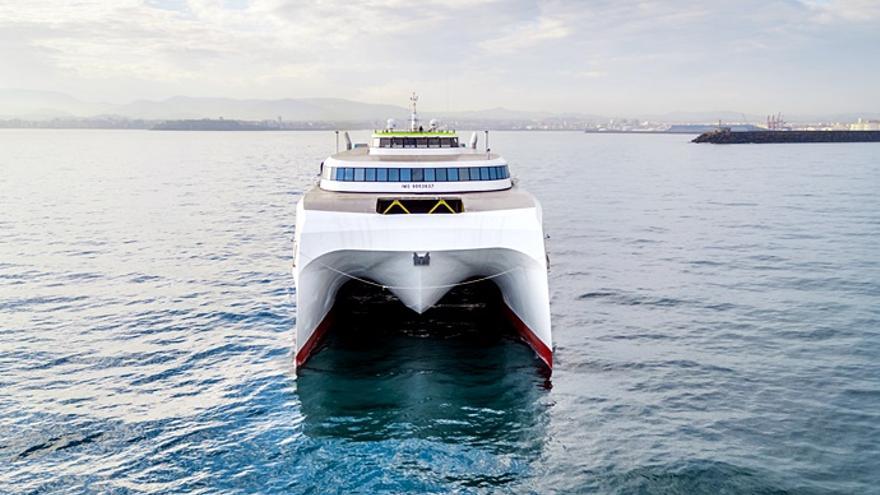 If there is something that we all want to recover, when the numbers of the pandemic are under control and those of vaccinated have increased significantly, it is the pleasure of traveling. Above all, with summer just around the corner. And what better option than to bet on national destinations, in general, and on the Balearic Islands, in particular?

Travel to destinations such as Ibiza or Palma de Mallorca, in summer, on board a ferry becomes one of the best options to enjoy some safe and quality vacations with family and / or friends. But not only that, Baleària, firm in its commitment to sustainability, has included a new boat to the route Dénia – Ibiza – Palma unique in the world, as it is the first fast ferry with natural gas engines.

Eleanor Roosevelt, the fast ferry that sustainably connects the Valencian Community and the Balearic Islands

The Eleanor Roosevelt is he primer fast ferry for passengers and cargo who sails with dual natural gas engines, which make it a boat highly sustainable.

In fact, this is the flagship of the Baleària’s gas fleet strategy, which in 2022 will reach 9 ships. The shipping company has made an investment of 380 million euros to incorporate gas as fuel, which implies a considerable reduction in emissions and noise pollution. Specifically, they reduce CO2 emissions by 30%, NOx emissions by 85% and eliminate sulfur and particulate matter.

Regarding the Eleanor Roosevelt it is estimated that, annually, it will reduce C0 emissions2 equivalent to eliminating more than 8,900 cars or planting almost 27,000 trees. The actual fuel consumption and the efficiency of the engines is monitored thanks to the measurement equipment and sensors installed on board, within the framework of a project co-financed by CEF funds of the European Commission.

Innovation and comfort at the service of passengers

The new Baleària ship, which has been built in the Armón shipyards in Gijón, began to cover the last May 1 route Dénia-Ibiza-Palma. A journey that, because it is a high speed boat, complete in five hours, with a one-hour stopover in Ibiza.

With capacity for 1,200 passengers and 450 cars, the Eleanor Roosevelt offers passengers a comfortable, fast service and clearly marked by innovation in the connections between the Valencian Community and the Balearic Islands. “We want to promote the Balearic Islands, a destination in which we have always been involved and with whose citizens we are firmly committed, positioning our most revolutionary, green and smart boat”, according to Adolfo Utor, president of Baleària.

The Eleanor Roosevelt has capacity for 1,200 passengers and 450 passenger cars BALEÀRIA

In addition, it highlights that “the offer of high-speed passenger seats on this route will increase by 60% and that of the winery will double compared to the current one.”

With capacity for 1,200 passengers and 450 passenger cars, the Eleanor Roosevelt offers passengers a comfortable, fast service and clearly marked by innovation in connections

Baleària has focused on incorporating major technological improvements to ensure a better experience for customers on board, including the following:

– Access to the ship via QR code that passengers receive via WhatsApp, with the indication of the assigned seat number.

Also Read  Trading up: a woman's search to exchange a hairpin for a house | Life and Style

– Internet and WhatsApp coverage for text messages throughout the voyage.

– Video surveillance of pets through webcams.

In addition, another important aspect is that during its design, the current health circumstances for which the spaciousness and separation of seats.

Image of the interior of the ‘Eleanor Roosevelt’ BALEÀRIA

To benefit the comfort of the passengers the fast ferry from Baleària incorporates a innovative stabilization system which considerably reduces movement, vibrations and noise. In addition, access to the passenger area is via elevator or escalator and all seats are reclining, unusual elements in high-speed boats.

During the journey, passengers can enjoy a wide gastronomic offer in the two cafeterias inside the ship, as well as the food truck covering. The Eleanor Roosevelt It also has a children’s area and three VIP lounges with panoramic smart glass windows that adapt to the lighting conditions.

Why was the name Eleanor Roosevelt chosen?

With the name of the new fast ferry, Baleària, wanted to pay tribute to Eleanor Roosevelt, writer, gender equality activist, and advocate for the civil rights of African and Asian Americans and World War II refugees.

Roosevelt stood out for being the first president of the United Nations Human Rights Commission and one of the promoters of the Universal Declaration of Human Rights.

With this, there are already six ships with which the shipping company performs tribute to pioneering women in their respective disciplines, in accordance with its commitment to one of the sustainable development goals: equality and the empowerment of women. The five above were named after: Cecilia Payne, Hedy Lamarr, Hypatia of Alexandria, Marie Curie, and Rosalind Franklin.

As if it were a ‘spoiler’, we advise that we will shortly carry out a raffle among our readers for two double trips to the Balearic Islands, with departure from Dénia, València or Barcelona. So you must remain vigilant.

Those of you who do not want to leave your holidays to chance and are interested in traveling this summer to Ibiza or Palma de Mallorca, on board the fast ferry most sustainable in the world, you can now make your reservations through the web of the company. You can also consult its section of offers and promotions.