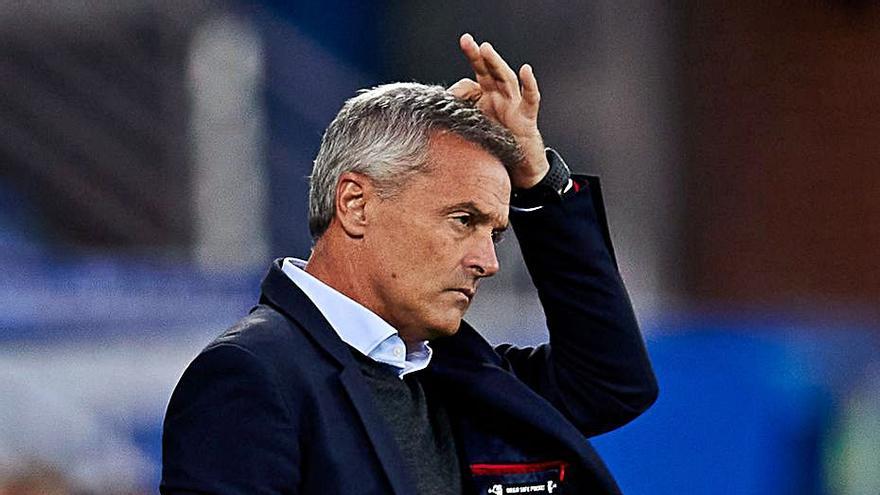 Escribá lived a difficult moment last season, after losing to Alavés at Martínez Valero, which left the Elche team almost doomed to relegation. However, in the last two games, with the victories against Cádiz and Athletic Club de Bilbao, he worked the miracle and managed to stay.

Now, curiously, after a new defeat against Alavés, those ghosts have reappeared and criticism of the franjiverde coach has multiplied after the Mendizorroza meeting.

Elche has only added one point out of a possible nine in the last three games: Rayo Vallecano (2-1), Espanyol (2-2) and Alavés (1-0). And the most worrying thing is that it has been against teams of the so-called of their particular league and, a priori, direct rivals in the fight for salvation. A situation that has left the Elche team three points behind the relegation positions, which Granada marks, and with the Nazaris with two games less.

But beyond the results, it is the team’s play and the errors and defensive imbalances that have caused criticism to intensify.

Elche saw how Rayo traced the match after going ahead on the scoreboard. Something similar happened with Espanyol. The franjiverdes took the lead and, in just over a minute, at the start of the second half, the Catalan team went 1-2. On that occasion, Benedetto’s tying goal avoided the drama.

Last Tuesday in Vitoria the same mistakes were repeated. Again, in the first moments of the second part, it fit a goal, in a set piece action, with another mismatch when it comes to defending.

Other issues of concern, both in the fans and in the club itself, are the few scoring chances that are generated. The dominance of a good part of the games, as has happened against Alavés and Espanyol, is fine and always appreciated, but without opportunities it is difficult for goals to arrive.

Against Alavés, Escribá said that his team “was better and proposed much more” and, although he was in control of the game during the first half, the statistics say the opposite, despite having 60% ball possession. Elche only fired four times at the opposite goal, with a shot between the three sticks. The babazorros did it up to 16 times, with six on goal and only the good performance of Kiko Casilla prevented the goal from Vitoria from arriving earlier.

Eleven and the Game System

Another of the objectionable aspects to Escribá is not having found a game system and an eleven type. The Valencian coach said last week that he did not want to have a permanent starting team and that he preferred to alternate and make changes as he had a large squad and that with 17-18 players it was not enough to face such a tough and long competition.

In addition, the Elche coach has not found the key to a defined game system. He started the season with three center-backs and two lanes and it wasn’t bad at all. Then he switched to a defense of four and the team does not finish finding the course, because it does not determine if it wants to attack more or defend itself.

In recent matches there have also been footballers who have lowered their performance, as has been the case with Mojica. Tactical variation may be one of the reasons.

The situation is not yet agonizing and a couple of good results can change everything and see the horizon in a different way. Escribá has already been able to go back and get Elche out of critical moments. On Saturday, Real Madrid arrives at Martínez Valero and the next match will be in Son Moix, against Mallorca, another direct rival for permanence. These two parties can be decisive in clarifying the future of the Elche team and Fran Escribá.

Fran Escribá will become this Saturday, in the match against Real Madrid, the coach who has directed the most matches at Elche in the First Division. The Valencian coach equaled, in the clash against Alavés, the 104 games of the Brazilian Otto Bumbel, who led the Elche team in the highest category in the 60s and early 70s.

Escribá, after achieving promotion, in the 2012-2013 season, he was in charge of Elche the next two, in which he directed 76 matches, achieving permanence in both. At the end of the 2014-2015 campaign, due to the economic problems that the entity was dragging on, he left. The Valencian coach returned last season and led the team in 17 games and in the current one he has eleven.

Among all the categories, Fran Escribá is the third coach with the most matches behind Felipe Mesones (213) and Roque Olsen (206).