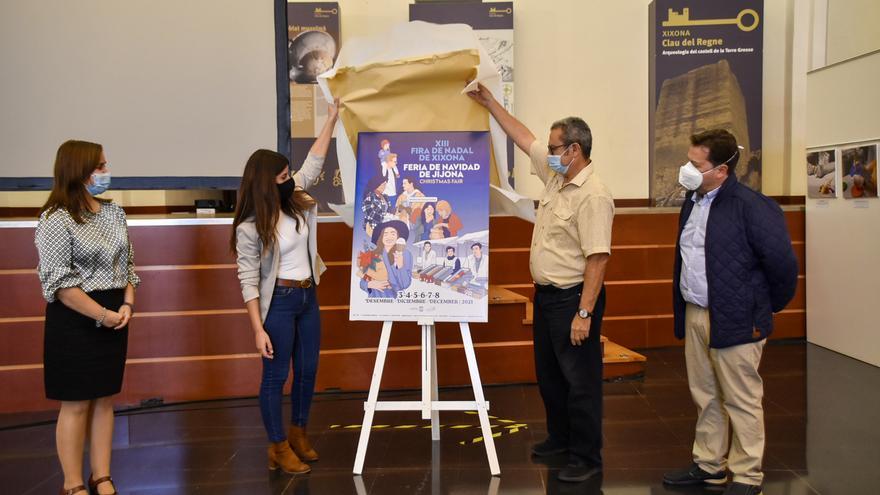 The Xixona Christmas Fair will once again be face-to-face. The successful contest, which will be held from December 3 to 8, has presented this Thursday the poster announcing what will be the longest edition in its history, made by the Jijonenca designer Ana González. The presentation took place at El Teatret and was attended by Isabel López (PSOE), mayor of Xixona; Pascual Sanchis and Raúl Sáez, president and secretary of the AEX; Eduardo Ferrer (Cs), Councilor for Tourism; and Ainhoa ​​López (PSOE), Councilor for Culture. This edition will feature all security guarantees required by the socio-sanitary situation at that time, as announced by the Consistory, after last year it took place virtually, with a web portal through which purchases could be made.

The image of this year’s Fair represents “the joy and warmth of the people”, Explained González, who has assured that“ one of the things that we miss the most last year and during all these months of pandemic has been human contact, that is why I wanted to reflect the importance of people, of all kinds of people, of all generations ”. In addition, the poster gives special prominence to local products – artisan nougat and ice cream – and makes a nod to both the traditional way of selling and new technologies.

In this sense, Isabel López explained that the XIII Jijona Christmas Fair is also a tribute to local commerce and that “this is the poster of illusion and back to normal, of course maintaining the prudence that the health situation requires at that time ”. López recalled that, in addition to the Fair days, the factories and shops de Xixona are open throughout the month so that anyone who wishes can do their Christmas shopping on any other day with fewer visitors.

For his part, Pascual Sanchis, president of the AEX, has recognized that “the Christmas Fair is a very important event for the entire commercial and business fabric of the town, especially for the nougat sector but also for small businesses and restaurants. ”. Along these lines, Raúl Sáez thanked “all the people of Xixona for their involvement and unity around this event, which grows year by year.”

The Xixona Christmas Fair is the most important Christmas market in the Valencian Community and they participate in it every year more than a hundred exhibitors places that offer the visitor not only nougat and sweets but the most complete range of Christmas products.

Also, traditionally, the Christmas Fair, which in its last face-to-face edition was visited by about 95,000 people, offers a complete program of activities such as workshops, pairings, tastings, musical performances, showcookings and attractions for all audiences.

“Our goal has always been that visitors can come to Xixona to spend the day discovering not only the world of nougat but also the amount of gastronomic, cultural and tourist proposals that we can offer,” said the mayor.