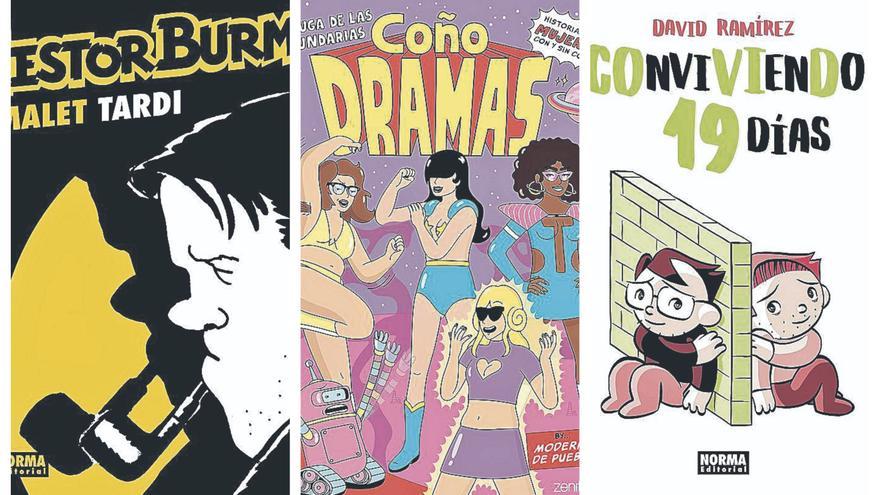 With the collaboration of Carlos Carrero in the scripts, the new work by Corcoles It is a compendium of random and fragmentary appearance, of ideas thrown in a chaotic way, but that are organized around a subtle analysis of the relationships between popular culture and the image of women, of how feminism has been constructed through It conquers against a tradition on which a society that sells its necessary change dearly is excused. The result is more than 300 pages of story that mixes from the self-fiction to the superhero comic through the romantic photonovela, but always throwing darts that, with an appearance of fun and recognizable simplicity, hide a powerful charge of reflective depth. Undoubtedly, one of the works of a year 2020 that will be remembered, in addition to what we all already know, for the impressive quality of the works published by national authors, also concentrated in the releases of the last months of the year.

Because to the works of Córcoles or those of Roca, Altarriba and Keko or Gallardo already mentioned in this section, at least two must be added: CONVIVING 19 DAYS, by David Ramírez (Norma Editorial), account of the confinement that conveys to the reader the hard moments lived by the author and her husband, positive for coronavirus during confinement. Ramírez masters humor like few others, but he knows how to transmit through it the explosive mixture of emotion and sensations that he suffered without falling into the easy melodrama, composing the first great story of the pandemic published at the time by social networks and now compiled in a book . For their part, Jorge García and Gustavo Rico meet again after the brilliant The Teeth of Eternity in Myrddin, transferring the fascination of Norse mythology for Arthurian. However, the authors detach their entire epic tale to develop a complex recreation of the story of the round table that could be accompanied by a soundtrack signed by the Bowie of psychedelia. Rico demonstrates his chameleonic ability by changing his style again to soak up the science fiction of Métal Hurlant’s humanoids and embrace the complex but fascinating reflection proposed by García, who rewrites the original plot with technological elements without losing an iota of its universal essence . The result is a mesmerizing and superb work.

Great works of national authorship that should not make us forget the appearance of such interesting comics as the devastating essay Billionaires, the life of the rich and powerful, by Darryl Cunningham (Evolution Comics, translation by Loreto Cabaleiro and José Óscar Plaza) or the spectacular complete reissue of Nestor Burma, by Leo Málet and Jacques Tardi (Norma Editorial), possibly one of the best comics of polar genre of history.

Good comics to welcome the year.